How the baccalà got its tale – Michelle Lovric 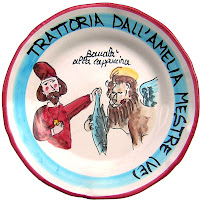 After all these years of writing about Venice, my list of must-tell tales from her past just grows longer and more tantalizing.

One of my current favourites is attached to something I look at every day – the pink palace just opposite. This story, like all the best ones, is about food and sex, and it also has some wine and shipwreck thrown in. As it simply cannot end up in a children’s book, and since it all unfolded 400 years too early for The Book of Human Skin, my latest adult novel, where better place to share it than in a History Girls’ Blog?

So pour yourself a prosecco, or a glass of freshly squeezed blood-orange juice, and I'll you the story of the way in which celebrated Venetian dish of baccalà mantecato arrived in our city.

Baccalà is the Venetian word for stoccafisso, meaning stockfish or cod. To make baccalà mantecato, dried salted cod is boiled and whipped up to a fluffy consistency with olive oil, salt and pepper. It’s served on rounds of bread or with polenta. These days it’s so popular that there’s even a Confraternity of the Baccalà with its own website. But neither the fish nor the recipe is native to Venice. Venetian baccalà, to quote numerous punners, is the piece of cod that surpasseth all understanding.

So what’s this to do with the palace opposite ours? Well, that pink palace once belonged to a branch of the Querini clan, patricians from the early days of the Venetian republic. I’ve spent a lot of time with this family over the last few years, as Marco Querini was the father-in-law of Bajamonte Tiepolo, the villain of my two children’s novels, The Undrowned Child and The Mourning Emporium. In 1310, Marco Querini conspired with Bajamonte to kill the Doge and take over the state. They failed, comprehensively. Their palaces were razed to the ground (this was the Rialto branch of the Querini family) and the Querini and Tiepolo crests hammered off every building in the city.

But our current story starts more than two hundred years later, by which time both families were somewhat rehabilitated. In April of 1431, sixty-eight Venetians set sail from Candia in Crete. Their vessel was the Gemma Quirinia, laden down with barrels of sweet Malvasia wine and spices for trade with Flanders. Their leader was the merchant nobleman Pietro Querini. All went swimmingly until some days out of Cadiz, when a terrible tempest broke the Gemma’s mast, ripped her sails and blew her off course. The ship was doomed. Querini boarded his men into two tenders – one of which was immediately swallowed by the sea. Seven weeks later, the survivors found themselves near the Lofoten archipelago inside the Arctic Circle. The Venetians were rescued by local fishermen and taken to the remote island of Rost. Querini described it in his diary as in culo mundi, the backside of the world.

But he soon changed his mind. The 120 islanders proved exceptionally hospitable: they fed, clothed and housed the Venetians. And their wives offered a quite outstanding amount of hospitality.

The men of Rost would depart before daylight on their fishing expeditions, leaving their wives in bed. Everyone slept naked on Rost in those days. It appears that when the husbands had vacated those beds, the Venetians were welcome to take their places. And they were expected to take part in the weekly communal hot bath, every Thursday, also, naturally, naked.

Not surprisingly, the Venetians tarried quite some time on Rost – four months’ worth of Thursday baths, it seems – and meanwhile became quite fond of the local cuisine. The islanders fed on a kind of codfish that could be eaten fresh or dried. Perhaps the Venetians had an interest in sending those Rost fishermen out to sea to replenish stocks as often as possible.

Eventually – in October 1432 – Querini and his friends returned to Venice, bringing with them some pleasant memories, including a recipe for whipped-up dried codfish.
Perhaps, for these men, the baccalà had the same evocative and synaesthetic texture as Proust’s Madeleine cake?

Of course the returning sailors still had to convince the Venetians of the joy of stockfish. The ripe smell was initially a little strong for their delicate nostrils and refined palates. But Venice came to love its baccalà. And a year later Querini returned to Lofoten with a shipful of wine and spices to trade for dried cod.

The success of baccalà was reinforced by the Councils of Trent in 1545 and 1563, when the dish was decreed an acceptable item of consumption on Wednesdays and Fridays during the lean days of Lent.

And now you'll find it on every counter of every bar in Venice.

I hope you enjoyed this little taste.

The Book of Human Skin will be featured on the TV Book Club on More4 July 24th and Channel 4 July 25.

I’m grateful to the elegant Alberto Toso Fei for alerting me to the stockfish story, and many others.

Wonderful, Michelle - thank you. I had no idea there was such a fascinating story behind it!

I am commenting from a bar with WiFi in Lucca! Should really be Venice but as I would never eat salt cod anyway, I suppose it doesn't matter.

I have promised myself a good catch up with all History Girls' posts on my return next weekend.

Fabulous post Michelle. When I was growing up In S Africa, on a Friday we always had "stockfish" ... "stokvis' as it was called there and I hated it! but then it didn't have the same provenance of your baccala to add piquancy!!!

Wow ! Once again I have learnt something new that I had considered totally Venetian !!! and once again sidetracked by a really interesting article you have written M - you do have this marvellous ability to stop me in my tracks !!

Well, no orange juice but I did make myself a cup of coffee before I read the story. I sat here sitting as I enjoyed the story. Thank you, Michelle. (I did wonder is there was an increase in the population.)

Sorry about the typo. I meant 'sat here sipping'.