Why is it that in history highly intelligent, accomplished, able women are viewed with suspicion by men (and other women) and get such a bad press?
I discovered one of my favourite stories about feisty women in history as I was researching The Medici Seal which follows the fortunes of a boy befriended by Leonardo da Vinci. When Caterina Sforza’s hu

sband was murdered she was left to defend her city and people against greedy would-be conquerors. Captured with her children Caterina negotiated to be released, agreeing to go into the last of her fortresses holding out against the enemy and persuade them to surrender. When she gets there she encourages her Captain and soldiers not to give up, and proceeds to stand on the battlements shouting down at her enemies, telling them all the tortures and deaths she will inflict upon them. They threaten to kill her children. The Bold Caterina’s response is to hoik up her skirts, point to her private parts and say “ Do your worst. I have the means to make more!”
Obviously Caterina was astute enough to work out that as soon as her enemies took her last fortress they would murder her and her children. Therefore she cunningly secured her freedom so that she could lead her armed men who were indeed inspired by her courage and thus gave her children their best chance of survival. They all did.
That amount of nerve leaves you gasping but, hey, way to go, Caterina!
That story was a bit of a sidetrack – one of those instances where you become fascinated by the research and then can’t shoehorn the nugget you’ve found into the final story. So glad we’re doing this Blog and I can share it now! I was actually on the trail of Lucrezia Borgia, famous (infamous?) daughter of a man who became Pope, she had riches in plenty but very little control over her life as her father and ruthless brother, Cesare, used her as a pawn in their strategies to acquire power and money. The husband she loved was murdered by her brother when no longer useful for his ambitions. Sent to marry the Duke of Ferrara who didn’t really care for her 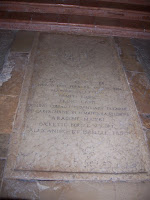 Lucrezia she won his respect by her courage in defending her adopted city against their enemies and for her diplomatic skill - to the extent that when he was away the Duke left the government in her hands. She was also a patron of the Arts, yet her name is more often associated with incest and murder. I hope I gave her a fairer hearing in the book. I loved finding out about her and reading her letters, and so grateful that my husband managed to blag his way into a convent of enclosed nuns to photograph her tomb.
It was a natural progression for me to become fascinated by the equally notorious Catherine de’ Medici while writing The Nostradamus Prophecy. The much maligned Catherine was “sold” as a child brid

e to the son of the King of France and fell in love with him, but was continuously humiliated for many years as he openly consorted with his mistress, showering honours upon her when he became King. Catherine was about to put aside as barren when suddenly she had lots of children - rumour was that his mistress had to insist that he slept with his wife to produce an heir and safeguard the throne. How awful was that for poor Catherine? However her time came. King dies. Catherine at once takes back the beautiful Chateau the King had given his mistress and the jewels etc, etc. Beset on all side by ruthless men with her children too small to rule, she fought her whole life to keep the throne safe for them to inherit. Credited with bringing ballet and the lucrative perfume industry to France, (and let’s not forget the innovative long drawers so that a woman could take part in the hunt by throwing her leg over a pommel while retaining her modesty). In addition to perfume Catherine was supposed to have imported the art of making poison too…
But if the armed guard supposed to be protecting you and yours is in the pay of your worst enemy what’s a girl supposed to do?
And then more recently in Prisoner of the Inquisition there’s the warrior Queen, Isabella of Spain, who was not prepared to be bullied out of her birthright. She suffered a traumatic childhood br

ought up in isolation by a mentally disturbed mother. Prominent supporters of her family’s rightful claim to the throne of Castile switched sides (sometimes several times) leaving her shocked at their betrayal. When her brother died she had to fend for herself. Marriage was brokered with Ferdinand of Aragon who thought he’d then be King of Castile and Aragon and take control of both, but Isabella wouldn’t let him and had herself crowned Queen of Castile.
Go Girl Go!
Isabella turned the government from one of venal corruption unto one that allowed the people to prosper and live under a rule of law. She was clever and had the foresight to back Columbus when others turned him down. I love the anecdote about Isabella that says she left a message about herself for history in the design of her tomb. In those days it was thought that intelligent people had heavier brains and her tomb was designed so that the indent on her stone pillow was deeper than that of her husband, Ferdinand, who lies beside her. I managed to get pic of her gorgeous little golden cro 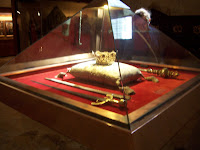 wn, and did try to get one of her stone pillow but when walking through to where her tomb is located the camera flash alerted the security guard. So the last photo you see is of us about to be ejected from 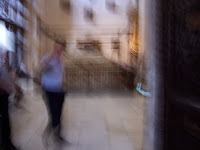 the Royal Chapel in Granada.
OK - so people who disagreed with Isabella tended to be dealt with in very disagreeable manner, but that was the custom of the time, and if she hadn’t, well…..
Consider the lives of these women, their upbringing, background, the times in which they lived and their particular circumstances. Famous male rulers are held in awe for their strength, famed for their wars and respected for holding a tough stance. Strong women on the other hand are reputed to be unnatural and castigated as being vicious.
Why?
Theresa Breslin
Prisoner of the Inquisition was voted the Carnegie Medal Shadowing Group favourite book.
To see and hear Theresa answering questions and talking about the book.
http://www.carnegiegreenaway.org.uk/shadowingsite/watch.php?authorid=3
Website: www.theresabreslin.com
http://www.facebook.com/Theresabreslinauthor
Posted by Theresa Breslin at 00:59

Very interesting post, Theresa. All I can say is 'Go girl go!' Carrying on telling us about these feisty women.

So interesting - and so true - that feisty women get a bad press... I've been reading Julia Fox's 'Sister Queens' about Catherine of Aragon and Juana the Mad. The latter, Fox convincingly argues, was not mad at all, but ruthlessly kept from power by her husband and father, the 'madness' being their excuse for ruling in her stead. They made her life wretched and it's THEIR version of the story that popularly survives... Great post, Theresa, and great interview at your link too.

Your husband blagged his way into an enclosed convent? Talented man!
Elizabeth Tudor seems to have plenty of respect is that just because she are English?

Thanks HGs! I think Eliz I attracts snide comments, Susan. True, she's deemed forceful and clever, but "unnatural" cos she never married. But could be that there is a different perspective in the UK - I got great insight from my German editor whose degree was in History and she really admired Catherine de' Medici. And in Spain they rate feisty women to this day. Harriet - I haven't read Julia Fox's 'Sister Queens' but I certainly will and would recommend C.W. Gortner's 'The Last Queen' about Juana the Mad.

Julia fox was my oldest daughter's History teacher at Secondary school! Must read the book.

Missed this as away yesterday, but very interesting stuff, Theresa!