AND THE WINNER IS… By Eleanor Updale

Last night, the Costa Book of the Year chosen. The winners of all the individual categories (Novel, First Novel, Biography, Children’s Book, and Poetry) were announced just after Christmas, and in the final stage of the competition those winners went head to head for the big prize. I was one of the judges, but I’m pleased to say (because I don’t trust myself to be in a fit state to blog after the party) that I am writing this before our final meeting, and so I have no idea, as I write, which of the five books will triumph.

I only know what a tough job it is comparing such diverse work and trying to apply a common yardstick. Four authors are going to be disappointed, when they should be bursting with pride. It’s hard not to feel uneasy about prizes (for all sorts of reasons we might discuss at another time) but they do serve one great purpose: they draw attention to books that might otherwise be missed.

Two of the contenders for the Costa prize are ‘history’ books. That is why I am concentrating on them here. They tackle the past in very different ways. Andrew Miller’s Pure is a novel, set in Paris shortly before the French Revolution. Now All Roads Lead to France, by Matthew Hollis, is a scholarly literary biography describing the last five years in the life of the poet Edward Thomas, who was killed on the battlefield at Arras on Easter Monday, 1917. Both are profoundly successful works, and being forced to rate them against each other has shown me the utter absurdity of taking sides for or against fiction and non-fiction as vehicles for discussing the past. I can commend them both to you without reservation.

So why do they work so well? I’ll try to tell you without spoiling them if you haven’t read them yet.

Some of their qualities are shared. Neither book can be the fruit of anything other than rigorous historical scholarship, but that effort is never gratuitously displayed. Even Hollis’s academic detail takes second place to the narrative drive of the human story he has to tell. Both writers move effortlessly in the worlds they depict. The reader is always confident that the author knows more about the era than he is letting on. Details of dress, food, transport and so on are there in the text, and chime as somehow ‘right’, but in neither case are they paraded to demonstrate the amount of background work the author has done. Miller uses them only as needed by his plot; Hollis to clothe the subjects of his attention in the mantle of their times.

The inner lives of real and fictional people are probed and speculated upon, but in neither book are the squeamishness or sensibilities of our time imposed on people from another era. They are judged by their standards, and not ours. Somehow the reader emerges from each book better informed about the mores of the time, but without a feeling of having been lectured or patronised. Of course, that apparent light touch is achieved with consummate control of the writer’s craft. In Pure, Andrew Miller even cured my allergy to the use of the present tense. In both books, the use of language is a joy. 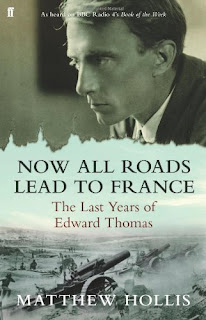 One would, perhaps, expect the biography, with its footnotes and careful sourcing, to be less gripping than the novel, but Matthew Hollis’s mannered, squabbling poets are just as compelling as Miller’s French grotesques. Though unmistakeably in awe of Thomas’s poetic abilities (Hollis is a poet himself) he nevertheless allows Thomas’s frailties as a man to seep through. Thomas is all the more convincing for the lack of any attempt to excuse his selfishness, or his multiple failures as a friend, husband and father. These shortcomings are not emphasised or over-analysed in the manner of so many biographies, rather they are just placed before us – emerging from Thomas’s words and actions; scrupulously observed. And Hollis resists the temptation to enfold his subject in the glamorous cloak of the (now) more fashionable ‘war’ poets such as Owen and Sassoon. While illustrating how Thomas’s poems were drenched in the fact of war, and reflected the wrenching calamity of the conflict, Hollis nevertheless reveals an uncomfortable truth about Thomas: he was happier inhabiting a soldiers uniform than his own skin, and enjoyed being at the front far more than battling against publishers and household obligations in his life before the war. 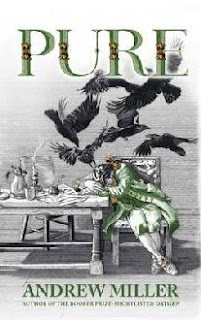 Andrew Miller uses a real location for his story Pure - the ancient, overstuffed, unsanitary cemetery of Les Innocents in the heart of eighteenth-century Paris - but the plot is a work of the imagination. And yet, how can we not believe absolutely in creations such as the casually disdainful functionary who tasks the main character - a young provincial engineer - with razing Les Innocents to the ground? You can almost smell the rotting corpses unearthed by the team of labourers imported to do the job. The violence in the book hurts. The uncertainty and danger that pervade the personal lives of the characters mirror the political atmosphere of the day (1785). Could there be a more convincing evocation of the mood of excitement and distrust than that created by Miller’s vignettes of everyday life slithering on as the foundations of Paris begin to shake? Reading this book, it’s somehow easier to understand what it must have been like to live in Cairo or Tripoli early last year, as the Arab Spring was gathering momentum. The Revolutionary graffiti in Miller’s Paris somehow pre-echoes that of 1968 and 1989, and the tweets and emails of 2011. But Miller never hits us with a leaden reflection on parallels with modern times. His fictional characters, and Hollis’s real people, are allowed the values of their day while retaining an essential humanity - making their plights just as relevant to the 21st century as those of the cast of any news bulletin or modern novel.

So will one of these ‘history’ books win the Costa prize? They are up against a wonderful shortlist: Carol Ann Duffy’s new collection of poems, The Bees, Christie Watson’s first novel, Small Sunbirds Far Away, and Moira Young’s original and exciting book for children Blood Red Road. I’m not going to say which book I’m voting for. Who knows what passions will be unleashed and what trade-offs made when we judges sit down together to make our decision?

But I should remind myself, in the real world that happened yesterday. When you read this, you will know whether Pure or All Roads Now Lead to France has taken the palm. Whatever happened, both books are well worth a read. In their very different ways, they do what lovers of history books want: when you finish reading, you are left with a heightened ‘feel’ for a past time, wanting to find out more, and not entirely sure how you found out all the new things you now know.

www.eleanorupdale.com
Posted by Eleanor at 00:01

What a fantastic post. I am itching to read both books now!

Have Pure on my Kindle and longing for the time to sit down and read.

Such compelling reviews, reminding me why some "history books" work so much better - and inform far more than others. Yes, am adding to the book lists.

Fascinating and illuminating post. What a challenging task to have to evaluate the literary worth of such different works! Have just read a chunk of PURE on Amazon as I don't know the prizewinner's work. What supple prose. And I agree about Miller's use of the present tense, Eleanor, it was a couple of pages before I noticed.

Thanks so much for posting this! It's fascinating to read it this morning when all the papers are full of the 'bitter' dispute between just these two titles. I wonder which you voted for....I've got PURE downstairs on my shelf so am personally very pleased it won. But I want to read the HOllis too. COngrats all round on your judging and reviewing acumen.

What a tremendous task to judge those books. Well done, Eleanor. Good to know that historical fiction wonand I can't wait to read the two you wrote about.

I know now - and I am going to read PURE. Just as soon as it's in paperback. Thanks for the post!