From the Sketchbook: Leviathan 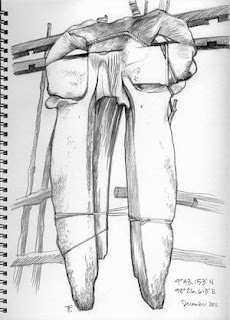 The bones hung from their rough scaffolding like a monstrous white face with slit eyes and tusks. Below them was the prow of a sailing ship made from driftwood and planks, pointing west into the Andaman Sea, but embedded in the sands of Koh Phayam, a small Thai island near the Burmese border. I wondered, as I made this sketch recently, what an approaching nineteenth-century European captain would have made of the spectral “ship” and the shield-like bones lashed to it. Would they have been seen as an evil omen, signifying a hostile island to avoid?

The only sea captains nearby were busy, day and night, on their squid boats and those of us lurking in the shadow of the bones were merely armed with cold drinks. For this driftwood ship was nothing more sinister than a cleverly fashioned beach bar; the bones were an elaborate decoration and curiosity. All I could find out about them was that they came from a baby whale washed ashore and salvaged by a Burmese fisherman.

I found the whalebones haunting and evocative of other stories. Perhaps this is because I grew up on the New England coast, steeped in the dramas of whaling history and lore. Or maybe it was because I was engrossed in Carol Birch’s Jamrach’s Menagerie, the lush yet harrowing story of a young man’s journey to Southeast Asia on a whaling ship to capture a ‘dragon’ for a rich collector. Birch’s descriptions of whale hunting and butchering are not for the faint-hearted; her sailing ship, the Lysander, is a floating hell of blood, blubber and oil. The sailors’ moment of triumph over the leviathan and the dragon is short-lived, however, and unforgiving seas dictate the rest of the voyage.

The true story of the ill-fated Essex, a Nantucket whale ship attacked and sunk in the south Pacific by a gigantic sperm whale in 1820, inspired both Birch and Herman Melville. While serving on the whale ship Acushnet, Melville met the son of the Essex’s first mate and read his father’s account of the disaster. The enraged sperm whale that targeted the Essex became the model for Moby-Dick, but it was not the only one to hunt down whale ships. In the Pacific, a sperm whale attacked the whaleboats of the Ann Alexander in 1850, so angering her captain that he set out, to his crew’s dismay, to take the whale at whatever cost. The whale retaliated and “stove in” the Ann Alexander, forcing the crew to escape in their whaleboats, presumably destined for the same fate as the Essex crewmen. Though they did survive, the men blamed their captain, a man not unlike Ahab in his determination to kill the aggressive whale.

Amidst all of these stories I thought of the young whale whose bones I drew. I had no idea of whale anatomy and was not sure what I was looking at. Oddly enough, within days of leaving the island and settling back at home, I came across a startling photo in the Obituaries section of the Guardian newspaper. The skeleton of a sperm whale was laid out on the floor of Burton Constable, a large house in Yorkshire, whose owner, John Chichester-Constable, had recently died. The shape of the head bones in the photo made me believe I had probably drawn part of the young whale’s head. But what surprised me more was the story of the skeleton in Burton Constable’s hall.

The owners of Burton Hall hold the title of Lord Paramount of the Seigniory of Holderness, giving them the right to “royal fish” washed up on the shores “from Flamborough to Spurn Point”. In 1825 a 58-foot sperm whale was stranded and claimed by Sir Thomas Constable. Its skeleton was placed on a metal stand on the grounds where it sank into muddy obscurity until Chichester-Constable retrieved the bones and put them on display in his hall. This was no ordinary sperm whale skeleton, having been described by Melville in Chapter 102 of Moby-Dick: “Moreover, at a place in Yorkshire, England, Burton Constable by name, a certain Sir Clifford Constable has in his possession the skeleton of a Sperm Whale. Sir Clifford’s whale has been articulated throughout; so that like a great chest of drawers, you can open and shut him, in all his long cavities — spread out his ribs like a gigantic fan — and swing all day upon his lower jaw. Locks are to be put upon some of his trap doors and shutters; and a footman will show round future visitors with a bunch of keys at his side. Sir Clifford thinks of charging twopence for a peep at the whispering gallery in the spinal column; threepence to hear the echo in the hollow of his cerebellum; and sixpence for the unrivalled view from his forehead.”

One whale skeleton rests in an English hall under ancestral portraits and another hangs like a tombstone above a make-believe ship on a Thai island. I find my sketch a bit difficult to look at, however much I enjoyed making it. It marks the loss of another majestic creature and brings to mind not only the ghosts of countless beached and hunted whales, but also the lost souls who pursued them to the ends of the earth.

Teresa Flavin is the author of The Blackhope Enigma and The Crimson Shard, historical fantasy novels for young readers, published by Templar Publishing in the UK and Candlewick Press in the USA. She is currently at work on her third novel.

Your post resonated with me as just yesterday I looked out over the sea and saw two blows and through the binoculars the familiar flipper followed by the flukes coming up of a Humpback whale. It's late in the season for a Humpback to be in the Bay. But she has a calf and maybe has stayed longer to get it stronger for the incredibly long journey back to the Antartic to feed while the ice-caps are still melted. I've set 2 books in this Bay. The first was When Whales Go Free which tells the story of the first whaling station set up here in Plettenberg Bay by a Norwegian in 1911 when the stocks of whales in the North were already diminishing and also a picture book based on the song of the Humpback called Do the Whales Still Sing? I don't hear their 'songs' from my bed but I do sometimes hear the 'blow'. A lovely post for me to wake up to this morning. Thank you!

This post is most interesting. Moby Dick is one of those books I have always told myself I should read...I am sort of theoretically interested in it without having actually picked it up and given it a go! Love the sketch!

Thanks for your comments! I would love to see the familiar blows and flukes, Dianne. How lucky you are! And I do recommend Moby Dick, Adele. Though it can be a bit hard going at times, at heart it is a chilling and thrilling story whose ending affected me quite a bit.

I have read Moby-Dick (note hyphen) and loved it but it was a very long time ago. I remember feeling I had BECOME a whale while reading it.

And I was quite slim in those days!

We went whale-watching in Massachussetts a few years ago and it was wonderful.