HISTORICAL SURVIVORS - the women who dodged the bullet 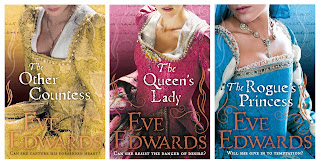 I spent the autumn dipping into Peter Ackroyd's 'The History of England pt 1'.  Apart from quickly realising that I would never ever want the job of king of England, I became intrigued by the number of women that flirted on the edge of disaster but somehow managed to stay alive when their husbands and sons met with grim fates. I have recently written three historical romances for teens set in the Tudor period; the logic of that genre is you 'stop the clock' when the story reaches the happy ever after for the couple.  A few storm clouds may be threatening but at heart it is an optimistic genre.  In the historical record, lives are left running into decline and fall.  Some fall spectacularly but there are those, tucked away in the margins, who cling on to something like contentment, if not happiness. In what looks like a tough year for all ahead, I am dedicating this post to those survivors.

My favourite is Lady Catherine Gordon, a cousin of the king of Scotland, married by the Scottish sovereign in a blatant piece of 'let's annoy the English' to Perkin Warbeck, pretender to the throne held by Henry VII.  Perkin had a good run for his money, making a serious bid for the throne on the claim that he was one of the missing princes in the tower, but was finally hanged in 1499.  What I found most extraordinary was the Catherine was then welcomed in the English Court in a strange position of prisoner come lady-in-waiting, and went on to marry another three husbands, all court gentlemen.  I couldn't track down a picture of this lady but she sounds quite a character.  Did she know that she was married to an impostor?  What an interesting psychological journey she must have had.  It makes me think there's definitely a novel in it, if someone hasn't already got to her (please do let me know).

A more famous survivor is Elizabeth Woodville, wife of Edward IV and mother to the princes in the tower. She survived Richard III and lived on until 1492.  Most (if not all) women will give her three cheers because she managed to persuade her royal husband to marry her (she was of lowly status for king's consort) rather than turn her into another of his mistresses.  Living through the Wars of the Roses, it is hardly surprising her life was as bloodstained as the end of Hamlet, but she managed to die in her bed, living a quiet life in religious retreat at Bermondsey.


Another notable survivor is Eleanor of Aquitaine, wife of Henry II, mother of Richard and John, held on until she was eighty, scheming away even though she ended life under house arrest.  Adeliza of Louvain, second wife of Henry I, outlived him and went on to marry for love and have seven children.  Lisa Hilton has a fascinating chapter on both of these women in her Queen's Consort: England's Medieval Queens if you wish to read more.   Clearly, there is a pattern emerging here. I've often thought how badly done by women are in history (and it is obviously true that they suffered huge disadvantages) but one blessing was that you were usually not being thought worthy of being sent to the block - until we get to Henry VIII and his murderous children that is.

I'd love to hear about your favourite survivors.  Please do leave suggestions for a top ten which I will post on the History Girls site next time.

For years I've wanted to write about Margaret, Duchess of Parma. After a tumultuous youth - her first fiance died; she was force to marry a Farnese grandson instead of Cosimo de Medici. Did she know what a fate she escaped. Through her the Farnese family gained control of Parma.

Later She became Governor of the Netherlands during the Dutch struggle for independence and retired to the Abruzzo when superseded by the Duke of Alba who was determined to stomp on the protestants. AND she managed to die in her own bed at the age of 64

Hi Eve,
Since you asked the question about Lady Catherine Gordon, she is in fact the protagonist of Sandra Worth's 'Pale Rose of England' - a truly wonderful read! You can read my review of it here: http://onthetudortrail.com/Blog/2011/03/29/a-review-of-sandra-worths-pale-rose-of-england/

Oh, these are just my kind of women! I have been wanting to write a Plantagenet trilogy for some time, culminating in Elizabeth Woodville but Philippa Gregory is touching on these subjects in her recent books.

I didn't know about Catherine Gordon; thank you.

These are my favourite kind of women to read about both in the history books (which rarely touch on them) or in historical fiction! :o)

My all time favourite would have to be the amazing woman who captured my attention in the first place and brought me into this genre: Aliénor d'Aquitaine! Imagine being able to get an annulment from the King of France pretty much on her terms, then negotiating her own marriage to Henry of Anjou! Plus all that travelling well into her 80s... She was an amazing woman! :o)

Oh, I love survivors - they make such great fiction as they compromise and shape-change to survive. Much more interesting - if less pure and glorious - than the martyrs and heroes. Charles II is a pinup of mine, and my novel A Secret Alchemy is about Elizabeth Woodville, as well as her brother, who didn't survive of course.

I've a great fondness for Eleanor of Acquitaine too - maybe the ultimate survivor. Elizabeth 1st too, of course...

I so agree - and Eleanor/Alienor of Aquitaine is the grandest dame in history! I'd go also for Nest ferch Rhys, the 'Helen of Wales' - princess of Wales, daughter of Rhys ap Tewder, sometime mistress of Henry I by whom she had a son, wife of Gerald of Windsor, abducted by Owain of Powys, rescued by the Normans (and her own sound sense), mother of anything between five and seven more children, and remarried to Stephen of Cardigan.

My favourite is Anne of Cleves. Once she realized that her marriage to Henry VIII wasn't going to work she accepted a (very generous) divorce settlement and lived happily ever after in Sussex. Not a great subject to write about admittedly, but nonetheless an example of a pragmatic woman who long outlived her peers.

Great post! And yet another non-fiction book to add to my to-borrow-from-work list, as we have the Hilton book at my library :-D

I love this post. 'Survivor' really means something in the times these women lived through, and it's hard to imagine now how tough they had to be just to keep their heads on their shoulders.
I'd make a bid for Anne of Brittany to be on the list too - the woman who married three kings - but I fear she looks rather a drooping lily beside some of these others.

I like Emma of Normandy. Queen consort of England to both sides - AEthelred the Unready and Cnut of Denmark - and through the latter Queen consort of Denmark and Norway. Acted as regent in Wessex in 1040. Two of her sons, one by each husband, and two stepsons, also by each husband, became kings of England, as did her great-nephew William the Conqueror. Died in Winchester in 1052 aged 66-67. (According to Wikipedia, at least.)