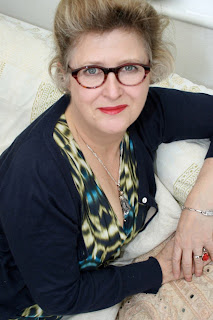 We're delighted to welcome Sally Gardner to our blog today.

Sally is an award-winning novelist from London. Her books have been translated into 22 languages and have sold more than one million copies in the UK.

Her historical novel for older readers, I, Coriander, won the Smarties Children's Book Prize in 2005. Two thrillers both set at the time of the French Revolution, The Red Necklace and The Silver Blade, which was shortlisted for the Guardian Children's Fiction Prize in 2009, followed. Actor Dominic West (The Wire) has bought the film rights to both titles.

Sally Gardner is an avid spokesperson for Dyslexia, working to change the way it is perceived by society. She is dyslexic and argues that it’s not a disability, but a gift.

Her latest novel, The Double Shadow, published by Orion, is a new departure. You can read History Girl Mary Hoffman's review of it in the Guardian: here 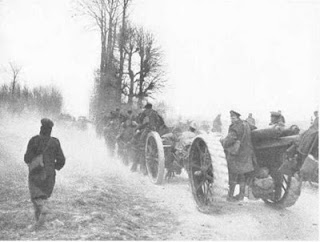 The character of Noel Pascoe in my novel The Double Shadow was based on the knowledge I had of my two grandfathers, both of whom fought at Passchendaele in the first world war. One was seen to have had a good war, the other a bad war. Any soldier who has fought in Afghanistan will tell you that there is no such thing as a good war.

My Grandpa John, on my mother's side, was an officer and awarded the Military Cross on the battlefield. He returned home a reluctant hero who went on to have a successful career in finance. He never talked about why or how he was awarded his medal. He left that for us to find out after his death.

Grandpa Edward Gardner never recovered from his experiences at the front. He returned home, as my grandma said, half the man he was.

Last year I was given Edward's war diaries. They had been talked about in the family but I had never actually seen them. They were written in two leather-bound books. The handwriting, like that of my father, is pretty illegible. I was stumped as to what could be done with them until I had a brainwave. I have worked for a number of years with a remarkable woman who manages to decipher my dyslexia. I wondered if she could do the same to Grandpa's war diaries. What came back was the most moving insight into a man I realised I hardly knew. It made the war all that more shocking because it is so immediate.

His words illustrate the small, mundane detail and the quiet courage of his days, the waste of a lost generation. I now know that my grandfather was a ghost of a man, one of the many living dead who returned to continue with a life that had little meaning. At the age of fifty he gave up and waited to die. He was to spend the next forty-one years in that particular waiting room. He sat in an armchair, reading Dickens or watching old Westerns. He hardly ever talked, he was a silent character who smoked two packets of Woodbines a day and drank tea with so much sugar that the spoon would stand up for a second or more. His only food was buttery, mashed potatoes with a fried egg on top.

On Thursdays he would help my grandmother make what was called pea soup. This soup was an alchemy that involved the potting shed, a muslin cloth and took two days to conjure, and it was a routine that never varied until he died at 91. Apart from this one activity he sat in his armchair, twiddling his thumbs round and round. Only now, through his diaries, do I see what happened to him and why he was so emotionally damaged. It was a time when you just shut up and put up, when there was little or no help for ex-soldiers suffering the after-effects of war.

Edward Walker Gardner was born in 1880, in Penrith, Cumberland. At twenty, he was working for a watchmaker, a job he was to return to after the war, eventually opening a jewellers in Fishergate, Preston. 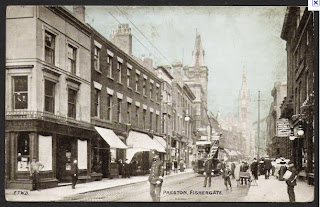 He married my grandmother, Annie Lucas, a Preston girl, in June, 1910. He was thirty, she a year older. They set up home close to Annie's parents in Preston and two years later, their only son was born. Married men were not conscripted to fight until June 1916 and it was in April 1917 that Edward was called up. He was posted to the Royal Garrison Artillery and throughout the war was a Gunner in 129 Heavy Battery.

Before the war broke out he had been a cycling fanatic. There is a wonderful picture of him standing with his bike in a striped cycling outfit and a moustache to be proud of. In short, he looked a confident, handsome man. Between that photograph and the man I knew was the Great War.

These extracts from Edward's diary were written during the advance on Passchendaele.

Just been in bed an hour when called out at 9 pm to proceed to Iron Cross with a couple of the guns. Went to the Wagon lines & from there on past the canal. I was with A Sub gun & all went well until we reached the Iron Cross roads. Here the drivers of the team took too wide a sweep to miss a shell hole with the result the off wheel of the gun left the track and sank nearly axle deep in the mud. The night was pitch dark & Jerry was lobbing over shrapnel just to liven us up a bit & to put the tin hat on the job it commenced to rain. In spite of all the efforts of the men & horses we could not shift the gun. We were just getting the jacks ready to lift the wheel when a driver rode up & said the other gun was stuck near the canal & all the men were required to assist in getting it out. It was now about 1 am in the morning & we were pretty wet already. Back we trudged along the plank road for a distance of about a couple of miles, finding the other party busy with the gun which like our own lay with one wheel off the track. It was an hour's hard work to get it up & once more the team was hitched in & we went forward. Everything went well & we passed our gun, turned the corner safely round the crossroads. A few dozen yards further there was another turn & this time the drivers again bungled it, so that the gun was bogged once more, this time worse than ever.

It was now about 3 am & the rain was pelting down but there was no alternative but to keep on working. Daylight came along & Fritz commenced shelling the Cross in earnest, so at about 6 am we were ordered to leave the guns where they were & return to the camp. This we did arriving back at 11.30 am fagged out & as hungry as owls, having had nothing to eat since 5 pm the previous night. Had breakfast & to bed for we were to return to the Cross at 9 pm. Had sleep, some tea then out once more, arriving at guns near midnight.

Rain still pouring down as we worked on the guns. Got ours out with the aid of a caterpillar tractor & commenced on the other. Fritz started heavy shelling & we had to take shelter. Poor Bibby was killed & another man wounded. I was called in to identify Bibby who lay in a concrete strong point along with four other men who had been killed. 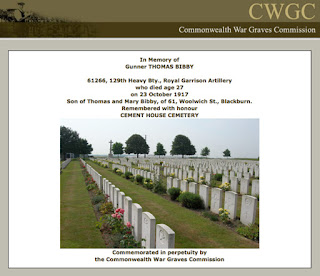 During a lull we got the other gun out & rushed it down to the platform where we got it safely fixed in spite of Fritz's efforts. We then had to run for shelter as things were pretty warm & it was 4.30 pm before we could get away. We had only gone 10 yards down the trench when a shell burst close behind us, but we kept on & at the Canal picked up a lorry which gave us a lift as far as the Rest Camp. We were thoroughly done up, wet through & had had no food all the day.

After tea I went straight to bed & to sleep.

Heartbreaking. Thank you for sharing that, Sally.

Yes war does leave long, long shadows across families, even when the event is over and apparently done.

Thank you for letting us read this diary extract. A precious though sad object to own.

Very touching - and it has particular resonance for reasons I'll tell you one day when we meet.
'Hungry as owls'? I've never heard that expression. It's wonderful.
Thank you for sharing this, Sally.

What a heartbreaking story, but so true for so many men who were in the trenches in WW I. I am looking forward to reading The Double Shadow. Thank you for this touching post.

What a very sad story. Thank you, Sally.

Sally, I've just finished reading your book and was so struck by how you brought the war to life with Noel. Even more affecting to see some of the inspiration fleshed out here. Thank you for sharing it.

Very moving post Sally. Combined with the photographs I felt I was there. Am privileged to be allowed to read your family diaries. Thanks

It is so important to remember the victims of that war as individuals rather than canon fodder, and reading the diaries of soldiers is one of the best ways to do this. Thank you so much for sharing this precious family document. How heartbreaking that war continued to take its toll throughout his life.