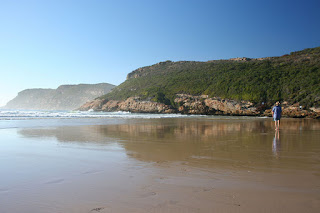 In a slim volume of The Tempest on my shelves, I found, inscribed in childish handwriting in green ink, the name Dianne Townsend 1963 Form IV. The notes in the margins remind me of how completely I immersed myself in the story. So much so I wanted to rename myself Miranda. The Tempest was probably written around 1611. Shakespeare is believed to have been influenced by the news of a ship driven onto the coast of the Bermudas by a hurricane in 1609. The crew managed to escape drowning and built two boats out of cedars growing on the island and were able to sail to Virginia. Interestingly the storm and wreck in The Tempest takes up very little of the story.
Survivors building two boats almost mirrors a wreck I’m researching at the moment. Most shipwrecks along the African coast took place during the era of the carreira da India, the Portuguese sailing route between Lisbon and Goa. Luis de Camões in his epic poem the Luisiades refers to the wreck of the São João in 1552. But the wreck for my story is slightly later. 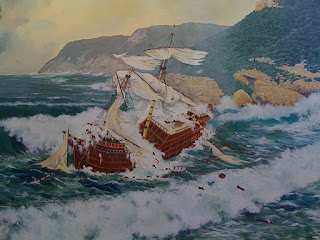 In 1630 the São Gonçalo, a great square rigged carrack totally overladen with sacks of pepper, bolts of silk and heaps of Ming china, left Goa and limped into this bay protected by a rocky headland, that I face right now as I write. A small group was sent ashore to forage but a wild easterly gale came up and the ship broke apart in the night on the rocks. A few hundred crew and slaves on board all drowned. It doesn’t take much imagination to feel that inrush of pounding sea and hear the flapping of loose shrouds, the sound of splintering timber and screams of drowning men in the darkness. It could have remained some nightmarish dream that would eventually fade, except an account was kept by one of the friars sent ashore. In confirmation of his report, a portion of crude sandstone was found in tangled bush in the 1850’s with the poignant words carved in Portuguese…
Here was lost the ship São Gonçalo
In the year 1630.
They built two vessels…
The remaining piece of writing on the broken stone was never found.
From the friar’s report we know the survivors built shelters of driftwood and a chapel between the tall reeds and bush of the dunes against the headland and became the first ‘foreigners’ to live on Southern African soil. Though Bartolomeu Dias had sailed past in 1487. From his ship he recorded the sharp cape that stuck out into the sea and the bay of lagoons he could see beyond. The spirit of a man braving these wild Atlantic rollers in the 15th century in a frail scallop of a boat to explore what Dias called ‘the dark side of the globe’ is beyond imagination.
My1630 survivors managed to build two boats of salvaged wood but the men split up… one group deciding to sail back up the coast towards Mozambique planning to reach India, the other heading west towards the Cape of Storm hoping to get home to Portugal. Those who went east reached Mozambique and remained there. The boat which hoped to reach Portugal drifted in the currents and winds until they were picked up by another ship, the Santa Ignacio de Loyola, and finally reached Lisbon in 1632 where the ship hit a sandbar in the Tagus and sank. Accounts differ as to whether the crew were saved or not. A Greek tragedy couldn’t have had a more dramatic ending.
Nothing was found of the Portuguese encampment or of the wreck of the Sao Gonçalo until 1979 when a bulldozer turned over a clod of sand in the dunes and some fragments of porcelain showed up. They were later identified by a ceramics expert as Ming china within the period 1623 because of the depiction of certain Taoist immortals and some characters on one bowl, with an upper limit of 1637 because of the absence of the Transitional style of porcelain which showed a more Western demand on Chinese potters. So the time frame fitted perfectly with the friar’s handwritten report of the wreck in 1630 and the fragments were typical of the porcelain carried on Portuguese carracks during this period known as ‘kraak’ porcelain… the Dutch word for a carrack. The exact place they camped had been found. 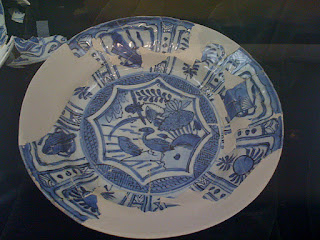 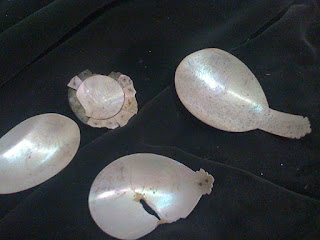 I'd love to find a fragment of porcelain baked in a Chinese kiln 370 years ago or rub my hands over the patina of a shell that was once used as a spoon. For the past forty years I’ve been foraging on this beach next to the Robberg Peninsula searching for some fragment of blue and white that is not willow pattern, some sliver of a 17th Century buckle, some mother of pearl spoon…but nothing!
I know what the men might have foraged for. This morning on my beach walk the owner of a border collie carried a bagful of huge white mussels the dog had dug up from the sand at low tide. Mussels, crabs, jellyfish, oysters and oyster-catchers are abundant. 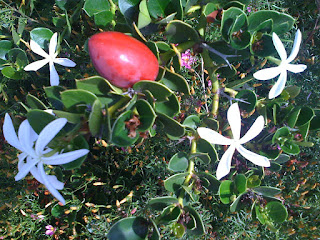 And in the ‘fynbos’ (the indigenous dune bush) around my house, the carissa bispinosa with its sweet smelling white star-flowers has delicious wild red fruit that the original Khoisan people who lived in the sea caves, descriptively called ‘num num’. There are tortoises as well and wild honeycomb they might have collected and seals and snakes too that they might have skinned and eaten. And this morning in the damp sand of my dune I found the tiny imprints of a bushbuck.
What did they think and feel during the eight months of being cast up on this Caliban coast on the ‘dark side of the globe’? The storm and the wreck itself will probably take up very little of my story. I have to get inside the heads of my characters. When dreams were lost and hope had dried up, what prevented them from becoming just another piece of wrack washed up on this shore?
www.diannehofmeyr.com

Wonderful. I feel as if I'm right there on your beach walk! (Well, almost.)

It must be lovely to have two very different places to draw on for inspiration - I envy you that!

Can't wait for the book that springs from this. Lovely! And Miranda is indeed a super name, but Dianne is good too.

I wish you every success with the story - fabulous source material & empathy from you. Thanks for posting.

Thanks everyone. I'll need the good wishes. The story seems almost dystopian... or rather dystopian in a historical setting. I think the challenge will be to get modern teen readers to feel involved with characters from a previous age who are trapped in an alien environment. It isn’t what is conventionally thought of as an historical novel, which traditionally takes the reader into well known periods – the French revolution or the Tudors or ancient Egypt. So I've set myself quite a challenge!

The story of the1630 survivors who almost reached home is heartbreaking! The courage of these men who travelled such distance in flimsy vessels is truly inspiring. I so enjoyed this beautifully illustrated post.

Here the sky is grey, the rain is falling and the week is steadily getting colder.

So, as ever, thank you for taking us travelling with you to your wonderfully colourful South African beaches with their marvellous stories.

Despite the thought of poor shipwrecked sailors, I should add.

Lovely post, lovely images - and I can't wait to read the book, though I shall have to!