Silesia - the land between by Leslie Wilson

Although my mother was German, she only lived for a year of her life in what is now Germany. She was born in Hindenburg/Zabrze in Upper Silesia, and went to live in Graz when Germany annexed Austria in 1938. She was then thirteen. As a child I was confused about her pre-war nationality, because she talked about Austria so much I was sure she was Austrian. One day, however, she corrected me when I said she had been Austrian(she took British nationality when she married my father). And she told me that the part of Germany she'd been born in was now Poland. This is the house where she was born in 1925; it was then a block of police officers' flats 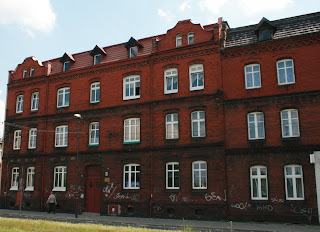 When I was a teenager, my brother began to learn Russian - and we were startled to hear my grandmother say - 'Oh, chleb for bread, that's the same as in Polish - and what's butter? Maslo? That's the same, too.' I'd never imagined that she spoke Polish - my mother certainly didn't. So I started to ask more questions. Where was she born? 'Zabrze,' she said. I thought: That's a Polish name. I asked her what her maiden name was, and she said what sounded like 'Kolotsi'. That sounded pretty Polish to me, too, and when I asked her to spell it, Kolodziej looked even more Polish. (In its Polish spelling, Kołodziej, it's a very common Polish name; I've been told it means 'Wheelwright.')

During my teen years, Omi (German for Granny) used to worry my mother very much by walking into Nottingham to attend the Polish mass in the Catholic cathedral, because it reminded her of home. My mother would drive into the city to try and pick her up, and once she asked me to join Omi there and come home on the bus with her. I can remember a general impression of candles and clouds of incense in the dark Victorian building, not at all like the airy spaces of the modern Catholic churches Omi attended in the suburbs. She was uncharacteristically annoyed to see me, and said quite shortly that she was quite able to come home on her own. It wasn't till recently, when I was reading about Silesia prior to finally visiting it for myself, that I discovered that Upper Silesians spoke a language called 'Schlesisch,' which was a dialect of Polish with German words fed through it. My brother said quite casually: 'Oh, yes, Omi told me she spoke Schlesisch, and played with Polish children when she was young.' 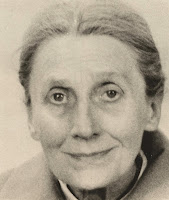 My grandmother never spoke English apart from a word or two - so when the liturgy of the Mass became English, the language was alien to her - but when she went to the Polish services, she must have understood everything, including the homily. No wonder she didn't want me arriving to take her away. Maybe she'd even made friends there and chatted to them in the language she hadn't been able to speak for so many years. I don't know.

Silesia has always been a place where peoples and ethnicities met. In early times, it was populated by Celts and Germanic Vandals (who left behind some very well-made artefacts, actually), before the Slavs arrived in the 6th century or so. Silesia then became a Polish dukedom; part of Bohemia; Polish again - then it reverted to Bohemia and came under Austrian rule when the Hapsburgs conquered Bohemia during the 30 Years' War. The eagle with the crescent moon and cross on the emblem, is the coat of arms of the Polish Piast dynasty, and I saw it in the St Vitus Cathedral in Prague, though nowadays only a sliver of Silesia remains in the Czech Republic. 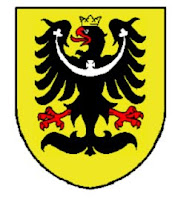 Initially, it was a thinly-populated land, and the Krkonosce mountains
Riesengebirge in German) in particular, but Italian miners arrived to dig for the precious and semi-precious stones in the mountains' depths. The mosaics of Ravenna and Venice are made of stones mined in the Krkonosce. On the southern slopes of the mountains, Walloon miners came, felled trees for charcoal, and became part of a nascent and very important lead crystal production industry.

On the northern side of the mountains, Duke Henry 1st of Silesia encouraged German farmers, miners, and monastic orders to settle in the region. The farmers brought advanced agricultural technology to work on hitherto wildnerness areas. Löwenberg (now Lwówek Śląski), which was my great-grandfather's birthplace, was one of the new, German-worked precious metal mining towns. New towns sprang up, designed on Germanic plans and using German law. Breslau (Wrocław), the Ducal seat, became a Hanse town.

In the eighteenth century, Frederick II of Prussia defeated the forces of Maria Theresia, Empress of Austria, and the subsequent Peace of Dresden gave Silesia to Prussia. This brought more German settlers, especially to the smelteries, but also Protestant Bohemian settlers who became farmers. Mining and heavy industry flourished, especially in Upper Silesia. My mother's birthplace was a smelly, filthy place, where children were kept indoors for days on end, sometimes, because of the great flakes of soot that fell like black snow. But productive. Before World War 2, England was importing brown coal from Silesia. 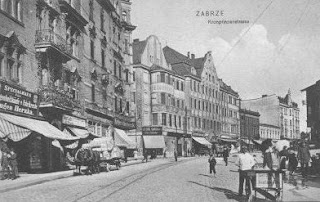 My grandfather came from Giersdorf (now Podgorzyn) Lower Silesia, from the Riesengebirge. That state was by then predominantly Lutheran and German-speaking. Here's a photograph of the 'little lake' high up in the mountains, above my great-grandfather's home. 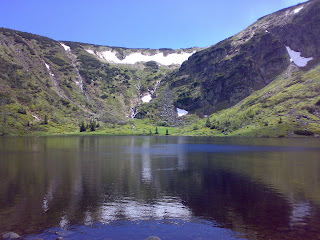 According to the Silesian-born writer, Horst Bienek, Upper Silesians were devout, extravagant if they could manage it, enjoyed life, loved celebrations and alcohol, and got into fights easily. They also liked to cry. Lower Silesians bit their lips bloody before they'd cry; they were thrifty, sometimes miserly. Both halves tended to be religious and mystical, but the religion of the Lower Silesians was 'light and rational' whereas that of the Upper Silesians was 'dark and melancholy.'

My grandfather- pictured below with his parents and sibling, the boy with the poodle-bow - wasn't a believer, and was quite happy to have his daughter grow up a Catholic, though he was descended from Zillertal Protestants, who came to Prussia to escape from persecution in the Tyrol (but more of that in a future blog). He certainly was reluctant to express his feelings, hiding them behind a harsh exterior. His commanding officer, during the war, praised his powers of endurance and 'strong will.' 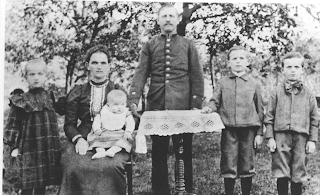 My grandmother had what was described as religious mania, and when we had family rows she'd get down on her knees and pray for us all. I think my mother inherited Omi's disposition - though she hated drunkenness. She adored celebrations, was a real drama queen, and though she didn't fight physically, was really combative. In my childhood, my home was a war zone.

As for liking to cry - I cry easily, as did my mother and Omi. I'd always wondered why my temperament was different from English people, but also different from the Germans I knew. When I read Horst Bienek, I realised. I think the intensity is probably a Slav trait, and I have a hefty dollop of that in my make-up.

Upper Silesians tended to regard themselves as Silesian, rather than German, and even 'ethnic Germans', like my grandmother, spoke Schlesisch and had Polish names. But I'm running out of space, so I shall continue the story next month.
Posted by Leslie Wilson at 01:00

And I am eager for next month's post. This is complex & wonderful - I love the mixture of the wide view of centuries & settlements with the very personal detail that you bring to this, Leslie. The image of your grandmother on her knees during family rows will stick with me!

Me too, Leslie - I want to read the rest now!
This is utterly fascinating, but (for me) also saddening. I'm one of those people who only realized the wonder of the world inhabited by her grandparents when it was way too late to ask.
Thank goodness you were wiser, and thank you for passing it on.

The sad bit comes next month - but yes, I am glad I heard a few things. I could kick myself for not asking Omi more.

I had ties with Upper Silesia and have found your post to be great reading. I also have read that many settlers came to these areas from Friesland in The Netherlands. Have you come across any information in this regard? I will surely stop by again to read further updates on this topic. Thanks ever so much.

I've never heard of the settlers from Friesland, but intend, some time, to blog about my ancestors, who were expelled from the Austrian Tyrol for being Protestants, in the early 19th century. But the country was, as I have said, a magnet for incomers and something of a melting pot.