The Rectum of the Bishop of Durham Catherine Johnson 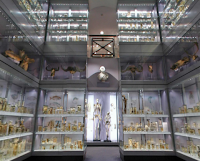 There, that got you looking. And to those of you who have happened upon this History Girls blog via google, welcome! And sorry, but this blog entry is about The Hunterian Museum and not any kind of unsavoury clerical activity.
The Hunterian, wonderful museum of the Royal College of Surgeons, repository of said rectum, as well as bits and bobs once attached to the second Marquis of Rockingham, giant squids and many other creatures, human and animal. The things in jars though, have never done it for me. At my school there was - and isn’t memory strange because I swear I saw it and smelt it but cannot now believe it – a baby in a bath of formaldehyde. That was at least whole, but I hated looking. And I can only look at the jars fleetingly, the Bishops’ bum at a glance could be a frilly floating flower, and I am content with that.
I am ambivalent about the skeletons too. I must admit to staring hard at the bones of Jonathan Wild, the villain of the early 1700s, a thoroughly corrupt thief taker. But I cannot look long at Charles Byrne, The Derry Giant, knowing his sad story.
What does fascinate is the fantastic eighteenth century brass chandelier on the staircase, every bit as wonderful as those in Bevis Marks and a gift from the Barber Surgeons Hall when it was demolished, and John Hunter’s (the man who began the collection) actual table. Not the full human body sized one, but the little occasional table shaped one that he did his early morning pre-breakfast dissection on. It is beautiful, sloping to the centre with a brass drainage grille. John Hunter was so good at dissection, embalming and preservation that he boasted ‘I can give a dead man almost any look’.
But most of all I love a precious instrument box from the late eighteenth century, covered in fishskin and lined with worn, but still shining, red velvet. The tools carefully packed tight like small children head to toe in a bed. This item struck me as the equivalent of a Mac Air book. Cutting edge technology, in a wonderfully designed package.
I am on part two of a story about an anatomist/surgeon’s apprentice. So that box is most definitely the one he takes with him everywhere. In my story it was bequeathed to him by his master, a fictional version of Hunter, who set up the best anatomy school and museum in Great Windmill Street in the eighteenth century.
I can see my protagonist screwing his feet into his boots and picking up that very instrument case, then running out into the night and making his way to Dover as fast as he can.
I suppose I better get on with it….
Posted by Catherine Johnson at 09:19

I am not very keen on things like that in jars either but the museum is undoubtedly worth a visit. There is also a floor in the Science Museum devoted to medicine - my father was fascinated by it. It all makes me glad that I was born after the introduction of certain developments in medicine!

By co-incidence, my daughter went to the Hunterian Museum last week with a group of artists. She raved about it and came away, sketch book full, inspired with ideas for her jewellery collection. I find that very odd. But then I'm not an artist.

Now that IS is a title and a half!

Never knew of this museum but must say a brisk rather than a lingering walk through the galleries sounds enticing when next down south. The tours and talks mentioned in the link look good too. I can see the wonderful attraction of that instrument case, a somehow hopeful thing.

The places you go! V interesting -though I think I'll miss the things in jars sounds like the stuff of nightmares.

Interesting blog and I suspect my daughter would like this museum. I have an 1805 book on 'domestic medicine' which is an intriguing read.

It's a wonderful place! Spent a long time there during research for the Westerman and Crowther books and liked it so much I gave Hunter a cameo appearance in Instruments. Know just what you mean about the instrument box.

I absolutely agree with you - the Hunterian Museum is brilliant. The last time I went one of the exhibits made me feel so queasy I had to rush outside, but there are some wonders. Particularly stunning - if it's still on display - was a boy's head who had been suffering from small pox. And, of course, the skeleton of the Irish giant and early dissections of the blood vessels. I've never noticed John Hunter's instrument box and will look it out next time I'm there. A must-see for novelists as well as aspiring surgeons. And they have some fantastic lectures there, too. Thanks for flagging it up, Catherine.

My wife will love this museum. I don't know when we return to London for a second visit (we live in Germany) but I know for sure that this visit will include a day in the Hunterian Museum.

Wow! I must go there.

I work in a medical library too, but luckily they removed all the jars of squishy bits before I got there. One of my favourite items in the collection is a tiny matchbox-sized silver case holding a set of six lancets (one missing) which belonged to a surgeon from Nelson's fleet. The most elegant nasty little blades, that fold into their tortoise-shell handles.

I have a typo in my own name above - how embarrassing!