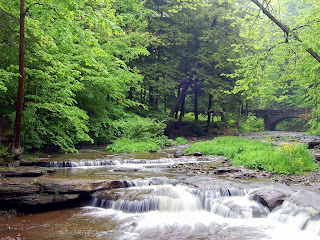 “You cannot step twice into the same river” according to Greek philosopher Heraclitus, who lived in Ephesus around 500BC… yet that is exactly what I am about to do! Having been sitting on the bank for five years since the publication of "I am the Great Horse", watching the water flow past, I am now ready to jump in again with the publication next month of the first book in a new Arthurian fantasy series about King Arthur’s daughter.

What Heraclitus means, of course, is that if you step into the river again… even only a fraction of a second after stepping out of it… then although it might look like the same river on the surface, it won’t be the same, because the water you stepped into last time has already flowed downstream, whereas the water you are stepping into now is new water that you’ve never experienced before. (At least, not unless last time you stepped into the river further upstream, then jumped out again, and ran faster downstream than the water flows, and timed it so you stepped in again at just the right moment when your original water caught up… but that is all rather exhausting to get your head around!)

My time out of the water watching the publishing river flow past, while undeniably frustrating, has shown me a few important things. First, for a children’s author, the river flows faster than it does for those of us who write adult books. We cannot (however hard we try) hold on to our fan base, any more than a mother can stop her children from growing up. The 9-year-olds who will be reading my Pendragon books were not even born when my debut novel Song Quest was published back in 1999. They might be the same age as those 9-year-olds who enjoyed Song Quest, but they are clearly not the same children.

That’s why, at the same time as my new series is published, Song Quest will be republished for a new generation of readers. To today’s children, it should seem like a brand new book. Whether today’s 9-year olds enjoy it as much as those who are now 22 remains to be seen, since even fantasy books age, and I'm aware of the difference in style between Song Quest (leisurely and detailed and long at 70,000 words) and Sword of Light (fast and simpler and short at 50,000 words… all right, maybe not that short!). I suspect Song Quest’s readership today will be slightly older than the readership for Sword of Light, which might not be a bad thing.

﻿
﻿ The author’s experience is rather different, too. When Song Quest was first published by Element in 1999, there were no blogs like this one. There was no Twitter. There was only a limited, slow internet. I had a simple website, kindly put together by the British Fantasy Society as a favour to their members... a website I never even saw until it had been “live” for two years, because I didn’t have the internet connection required to view it. There was no email for me. I sent big packets of paper to my publisher, and they sent big packets of paper back. “Tracked changes” were something to do with railways, not Word files. Fans wrote to me on paper in real envelopes that came through the letterbox, rather than opened on Outlook Express. I did zero self-promotion, beyond walking into town and telling the owner of the local independent bookshop I had a book coming out.

I rode the rapids when Song Quest won the Branford Boase Award and I signed a seven book contract (on the same day!), and a year later flew to San Francisco to launch my second children's book Spellfall at the American Libraries Association conference. With several years of deadlines lined up and a lovely agent - Maggie Noach - on board, I got swept into the middle of the publishing river without even realising it, and the water was, on the whole, life-sustaining. Then at some stage - and I still don't know what I did wrong, because I never stopped writing - I found myself washed up on the bank. That taught me the second thing about publishing: a contracted book (or two or – in my case – twelve) does not a career make. Meanwhile, those publishing waters kept rushing noisily downstream, and those still swimming in them probably didn’t have time to notice, but a new stream appeared, quietly trickling alongside only visible to those of us sitting on the bank… ebooks and amazon's Kindle. In the absence of either publisher or agent, I dipped my toe into that little stream and sipped of its waters. It kept me alive.

﻿Then Rhianna Pendragon came trotting out of the enchanted mists on her fairy horse, and I knew it was time to step into the main publishing river again. On the surface it still looked much like the same river… but Heraclitus was absolutely right, that river had changed. From something that looked inviting, it had become a roaring flood of debut authors fresh from university writing courses, pseudonymous series produced by the fiction factories, hotshot young agents and editors, and more and more new books. And it had become so NOISY! All those authors and publishers and agents now have blogs and Twitter accounts and singing, dancing websites, and appear at hundreds of new festivals that have sprung up all across the country talking about writing. The author’s job description has clearly changed.

So here I am! On the wonderful History Girls blog and elsewhere on the net, spending almost as much time writing these blog posts as writing my books. I’d much rather be sorting out the tricky plot holes in the middle of Book 3, which is carrying me downstream towards its deadline at an alarming rate. But I'm swimming again, and that’s got to be better than sitting on the bank thirsting for the publishing waters. (Though now, of course, I am a bit afraid of missing something that can only be seen from the bank...)

Thank you, Heraclitus, I think I understand now. And thank you, Templar, for inviting me back into the water!

Sword of Light is published by Templar in hardcover on 1st February.

Details of my other books (many now available as reasonably-priced ebooks for Kindle) can be found on my website at http://www.katherineroberts.co.uk/
Posted by Katherine Roberts at 04:00

As a succinct account of the history of publishing over the last decade, that could hardly be bettered. It's incredible how much has changed - and I haven't even put a toe into the Kindle stream yet (which may yet overflow its banks and sweep us all away...)

And those are two lovely covers.

Good to see you 'back in the river' Katherine! Looking forward to reading Sword of Light - sounds like a very interesting take on the Authurian legends.

Congratulations on your second dip, Katherine, and may you keep swimming in bright waters. The Great Horse sits here on my shelf and am really looking forward to riding with Rhianna. They're wise folk at Templar.

(And agree with Katherine's comments on your account of publishing history.)

Thank you, fellow swimmers - yes, they are lovely covers, aren't they? I can't wait to see them on the actual books in their shiny(Sword of Light) and foiled (Song Quest) paper format!

Mmm, Kath... will the Kindle stream flood its banks? I think it's more likely to grow, and then join up at some stage to make an even wider river. I find it quite exciting to be living through this period of publishing history.

A very good and succinct look at what's been happening to Publishing in the last decade or so. Brilliant stuff. Good luck to Rhianna. And to you in all rivers.

Agree with all the foregoing: how eloquently and engagingly you've explained what's been happening to authors.

Once, when I was a child, I was picked up by a freak 'king' wave in Sydney and dumped, sucked under, punished by sand and stones, and then allowed to float on the top again, feeling battered, sore and grateful. That's publishing too.

I found this very moving, Katherine, and true! It can be lonely on the bank and scary in the rapids. Here's hoping all us History Girls enjoy whatever part of the river we're in at any given moment. Carpe diem!

P.S. I agree your new covers are fab. Can't wait to dive in!

Good luck and may the waters prove calm and the books buoyant!

The freak wave sounds scary, Michelle - my gran was swept off the quay into the sea by one in Cornwall, and it was scary just watching her! On the other hand, calm waters are not very exciting...

What an incredibly powerful post, Katherine - both moving and exciting. I'm still splashing about in the shallow end, but your courage is a real inspiration.

It's also heartening to see there IS life after a metaphorical beaching, and perhaps an incentive to be bolder and take more risks. Publishing can be so frighteningly fickle, there's a terrible temptation just to produce what a particular market currently demands - but perhaps sometimes we should let a wave go by and wait for another that suits us better. Perhaps...

But congratulations on being back in the swim. I'd never truly appreciated before the quick turnaround in younger readers, but books like yours don't date, and I'm sure this new generation of readers will love them as much as the last.

I found your post very moving and true. Creativity and security are, alas, mutually exclusive but it's not a boring life... I wish you all the luck in the world with your next publishing venture.

Thank you alberridge - both fantasy and historical fiction have an advantage when it comes to dating. And splashing in the shallows can be fun... I actually think that staying in the river for too long brings a risk of drowning, so perhaps it is good to get out of it for short periods?

Thanks Linda. I agree... but there doesn't seem to be much security in non-creative work these days, either!

According to Byron we swim... some for love, others for glory. A great post Katherine! So I thought you might like a little from Swimming the Hellespont to cheer you on... and hope the ague relates only to that wonderful sensation of knowing you've pushed on.

But since he crossed the rapid tide,
According to the doubtful story,
To woo -and -Lord knows what beside,
And swam for Love, as I for Glory;


Twere hard to say who fared the best:
Sad mortals! thus the gods still plague you!
He lost his labour, I my jest;
For he was drowned, and I've the ague.