Once upon a time in a tower, Part One – Michelle Lovric

Once upon a time, my architect husband wanted to take over a deconsecrated bell tower in Venice and turn the top floor into a studio. Venice’s skyline is punctuated by dozens of empty bell-towers, now slowly crumbling into the lagoon. Inhabiting a building is the best way to keep it alive, and we were prepared to invest in the restoration of a tower even though we knew that we would never actually own one. But Byzantine negotiations with the church finally deprived our idea of the will to live. So Project Venice Bell-Tower was consigned to the imagination. I expiated my frustration in the usual writerly way – I wrote a novel about it. Talina in the Tower is the story of a girl, a cat, three dogs and an elderly writer who inhabit an imaginary bell-tower on the northernmost edge of Venice. I enjoyed myself immensely, fantasizing about the layout of each single room on each successive floor, furnishing it with every comfort and accoutrement I’d once desired for my own tower.

At the end of Talina in the Tower, I wrote an historical note about towers and their uses in Venice, enviously noting that some people had succeeded where we had failed: These days, parts of some bell towers are being used as dwellings. San Marcuola’s tower is partly residential now, as is the tower of Santa Margherita (which lost its spire in 1810) and those of San Boldu and San Stae. San Vidal’s lower floors are used as offices. The top floors of the abandoned towers would, of course, make wonderful studios for architects . . . or writers.

Truth is relentlessly stranger than fiction, of course. Before Talina in the Tower is even published, I’ve discovered that another mind at work on the same idea of making a creative studio in at the top of a disused bell-tower. But Alex Scott-Whitby had done more than imagine it. He is actually doing it.

I first met Alex Scott-Whitby in Venice eighteen months ago, when he was part of a team of young architects invigilating at the British Pavilion at the architecture Biennale. (Rather flatteringly, it happened that Alex and his colleagues whiled away some of their long hours at the reception desk reading my novel The Book of Human Skin.)

Over a dinner on the Zattere, we talked about Alex’s project called (IN)Spires – an idea to create a series of creative studios for a new generation of St Jeromes nesting within the belfries of the City of London's churches. By that time, Alex had already taken possession of a tower himself – that of St Mary Woolnoth in Lombard St – and was using it as a studio, from which he was already dreaming of even greater things.

To demonstrate the spirituality as well as the materiality of his aspiration, Alex recreated Dürer’s depiction of Saint Jerome in his study. (I am not sure how he persuaded the lion to walk up the hundred steps to the tower. Perhaps there was a steak at the top, or a gazelle.) 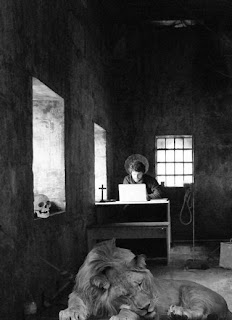 Alex’s plan is facilitate a layer of creativity floating like cream above London’s economic engine room – a new intellectual community in these airy eyries with their strange and wonderful perspective on the city. The 51 churches in the City of London serve just 11,000 residents. Alex believes that 38 of them have St Jerome potential. There is an urgent need, too, to protect the towers from globalization and commercialization: Alex explains that ‘mobile phone company circle like vultures around a carcass,’ waiting to fill them with broadcasting antennae. 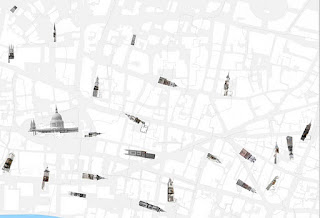 Over the next 30 years, Alex envisages, suitable applicants will be appointed both curates and curators of these towers. His own experiment has shown the worth of this human investment: ‘By acting as a curator of this place and becoming a keyholder to the church, I am also protecting it through occupation and as a tenant I provide a small income and so help to preserve and enliven this historic monument.’

And Alex looks beyond London too – foreseeing a global network of artists, designers and writers nesting in abandoned monuments.

In late October, I was delighted (though not surprised) to see that Alex’s (IN)Spires had won first prize in the RIBA Forgotten Spaces competition, which asked architects, artists, local groups and designers to nominate an abandoned place in Greater London and conceive an imaginative and inspiring proposal for its regeneration.

You can now see Alex’s and other architects’ ideas in an exhibition staged in some of Somerset House's own forgotten spaces – the lightwells and coalholes that lurk beneath the Edmond J Safra Fountain Court and in the evocative space known as the Deadhouse. The visitor makes his way in and out of these dim, mysterious niches and passageways, finding installations, images and multimedia that illustrate proposals for, amongst many other things, an urban climbing tunnel under Clapham High Street, a physic garden in Nag’s Head Yard, a Fish Ladder and salmon hatchery in the River Wandle, a Bee Farm and agro-forest in Neasden and a project to re-invent Crystal Palace as a Northern version of the scintillating market square of Djema el Fna in Marrakesh.

Part two of this blog is to follow – because I am lucky enough to have received an invitation to dinner in Alex’s bell-tower and I’m sure I’ll have plenty to tell you about that.

Talina in the Tower is published February 2nd, 2012, by Orion Children’s Books
Posted by michelle lovric at 01:00

It sounds wonderful but uncomfortable. There would be "all those stairs" and how on earth do you heat such a place? But - so what when you think of the view from the top!

Wonderful post, Michelle, and I'm another who can't wait to read Talina... I am fascinated, too, by Alex's project (do you think you will ever try again with another tower in Venice?). On my one trip to Venice thus far (on honeymoon a decade ago, in December - it snowed!) I was most intrigued by an as it were 'backstage' tour of the Doge's Palace, which took us to strange spaces (such as an amazing roofspace above a suspended ceiling), hidden passages, and an intimidating ancient interrogation room. I must try to get to the Forgotten Spaces exhibition!

What a fascinating post! But what can you do if you're a writer with vertigo?

Alas, towers are not for me, though I love the idea of them.

A very interesting post and I too am a bit torn about towers to live in, but the idea is marvellous and I wish N Spire luck with it. Hope you get lots of fun from Talina and her tower!

Thank you Michelle. What a wonderful vision, in imagination and reality.

I look forward to reading Talina in the Tower and also to visiting The Forgotten Spaces exhibition.

I write this from my studio overlooking Glasgow rooftops. As someone who has inhabited all sorts of studios, from a leaking, unheated former cigarette factory to a disused school, I swoon at the idea of a work/dream space in a church spire. I applaud the efforts of your husband, Michelle, and Alex Scott-Whitby. Thank you for the inspiring post!

You'd keep fit with all those stairs, like our friends who live on the fourth and fifth floor of an ancient house on the Ile St Louis. They are slim and muscled. I also am keen to read Talina...

Both your book and Alex's ideas sound fascinating! I must see the exhibition!

Wow - there's something so magical and romantic about towers, and all the connotations that accompany them. Someone should do a study on "Towers in Literature and Story-telling" - I'll bet there are hundreds of towers in all sorts of books.