THE BILLS OF MORTALITY - Mary Hooper 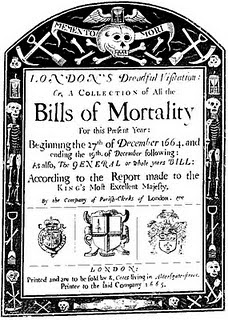 When I’m asked by anyone why I’ve abandoned modern fiction to
write only historical, I usually say that (i) I’ve run out of “modern” ideas: most of the things that can happen to a fifteen year old girl have already happened in one of my books,
(ii) to write a modern book, one has to keep up-to-date on technology so I’d
have to know much more than I do about i-pods, texting, twitter,
smart phones
and so on and (iii) all those tedious things I found out about in (ii) will be
out of date in six months’ time.
And that’s more or less true. But the other reason I am writing historicals is that I came across a Bill of Mortality. For anyone who hasn’t heard of these wonderful documents: within the City of London in the 17th Century, you could go into a stationer’s shop and for two pence buy a Bill (published weekly) principally to check whether plague deaths in your local parish were increasing or decreasing. If the numbers were increasing, then you would stay indoors as much as possible; if decreasing, then maybe you would think it was safe enough to go to the corner shop and buy a loaf of bread.
I was hooked the moment I saw the front page of the Bills for 1665 which is wonderfully, spookily Gothic with its heading “London’s Dreadful Visitation” and its symbols of death (skull, grave-diggers tools, winding sheet, skeleton). Inside, the actual causes of death make the most macabre and fascinating reading. For example, In 1665 there are five cases of death from being Distracted. In 1648 there was a single death from Itch while in 1660 nine people died from being Frighted. 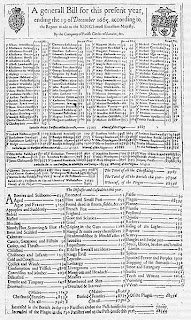 Grief makes an appearance several times a year and there are several cases of Rising of the Lights
(some sort of lung disease?) and also the gruesome-sounding Teeth and Worms and Headmould. Two others I find particularly fascinating in a ghastly sort of way are, Lethargy and The Purples.
Is it any wonder that, on reading these, I was immediately seized with a wish to find out
more about these people who died such tragic - yet intriguing - deaths? I wanted to locate these people behind the statistics and find out about their lives, and I also wanted to write a book where those gruesome Bills of Mortality formed an important part of the narrative. That was ten years ago and I’m not ready to go back to “modern” yet.
Posted by Mary Hooper at 01:00

Some people would find it a bit morbid but I love it!

I bought myself a book of epitaphs which gives you a wonderful idea of people's sense of humour. There's a grave in Yorkshire that reads:
'Here lies my poor wife,
without bed or blanket,
But dead as a doornail,
God be thanked.'

My favourite though, from Ruidoso in New Mexico: 'Here lies John Yeast. Pardon me for not rising.'

And Mary, I love Lethargy and The Purples! Sounds like something out of The Phantom Tollbooth.

Brilliant! Will try not to get Distracted in future . . . though that does lead on to whether the Deadly "Distracted" or the Idle & Undeserving "Distracted" came first?

I think my favourite is Headmould. Those poor people... but how deliciously fascinating. I love this post! Thank you, Mary.

Gosh, I never knew all this. How amazing. Imagine if we could read such things now....enough to make you a hypochondriac for life!

I love the Bills of Mortality! But I get distracted all the time, which is now a great deal more worrying than it was a week a go...

This is absolutely fascinating and I can fully understand why you switched from modern to historical. I have also found myself fascinated by old documents (I am a researcher) - they always seem so innocently truthful. Thanks for the information about Bills of Mortality - something new and different to know about.

Great post Mary! I agree absolutely about having to keep up with modern stuf - far too exhausting.

And this from the OED:
"rising of the lights" now hist. a medical condition characterized by difficulty in breathing or a choking sensation (probably arising from various causes, such as croup, asthma, pneumonia, or pulmonary embolism).

Great post, Mary. What odd and intriguing reasons for death! I love the "rising of the lights". How very Lovecraftian.

I do have a book called the Necropolis: London and its Dead that I've been meaning to read for some time--you've inspired me to get it out from my shelves and have a look at it.

Lovely post, Mary. That's why I now love writing historical stories. It's like being in a huge attic packed with stories. You can't help but trip over something that is absolutely fascination.

I've used (Venetian) bills of mortality in a historical novel, having come across them in Petrarch's library. Toothache was thought to be caused by worms, so perhaps that explains 'teeth and worms'. They make fascinating reading!