THE QUEEN AND I By Adèle Geras 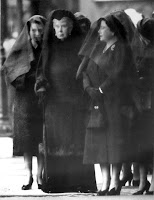 Elizabeth II and I go back a very long way. When I was eight years old, George VI died and I can remember all the grown-ups around me being very upset. The photograph of the three queens in mourning made a strong impression on me.

There also seemed to be a great deal of coverage of the Young Princesses, as they were called. I was at an age when I loved sticking things in scrapbooks. This must have been (as both Elizabeth and my own favourite, Margaret Rose....oh, how I loved the name!...were now grown-up) because of Crawfie's book about her time as nanny and governess in the Royal Household. Crawfie was the nickname of Marion Crawford and her book was called The Little Princesses. It was published in 1950 and the Royals never forgave Crawfie and had no contact with her ever again. I can't remember the physical book - my mother would never have read such a thing, I don't think - but extracts from it appeared in Woman's Own, and that magazine was certainly around during my childhood. So I began to read about the Princesses and to snip pictures out of the newspapers when I was about seven or eight. I stuck these in a scrapbook together with photos of the movie stars to whom I was totally devoted. By the time I was eight, I was a reader of both Silver Screen and Photoplay. My father's secretary, Sarah Tan, used to pass her copies on to me and I treasured them and read every word I could about the stars I adored. At this time, my friends and I played endless games which revolved round the films we'd seen. The fact that I never got to play Jane Powell but always had to be Ann Miller still rankles a bit. Ann Miller was the funny one, and even though she always had spectacular dance numbers in every single film, she was NOT the Romantic Lead. Sigh!

But back to the Queen. From the beginning of 1953, there was much chat about the Coronation. We were living in North Borneo in a town which was then called Jesselton. Our house was in the shadow of Mount Kinabalu and about fifty yards from a beach like the ones you see in Bacardi and Bounty advertisements. My first published work ever appeared in the local newspaper, The Sabah Times. I won a story competition and my prize was a Parker '51 Pen and Pencil set. For anyone who wishes to read about this period of my life in some detail, my novel OTHER ECHOES is extremely autobiographical.

The Coronation itself created, in this British Colony, many different ceremonies and parties. I remember being drilled with all the other schoolchildren for a kind of parade on the Padang: the playing field outside the Club. There were copies of the Illustrated London News kept at the Club and after the event, pictures like these

appeared for us to pore over and cut out and paste into our scrapbooks. I am sure my parents went out to dinner all over the place. There must have been a Reception at Government House to which I wasn't invited. What I do remember most clearly was the Coronation Picnic.

Picnics happened all the time in Jesselton. A few families would hire a motor launch and pack some bottles and snacks of various kinds and set off across a completely translucent sea to an outlying island called Gaya Island. The children played with fantastical shells and swam in the sea and made things out of coral and the adults lay about and drank beer and lemonade and gossiped in the shade. We'd spend the morning on the island and then go back at lunch time to eat a curry with at least 15 side dishes (sambals) and then, as I remember, collapse into a deep sleep till late afternoon.

I took this pattern, this routine, and wrote a short novel about it. I made the picnic special by linking it to the Coronation. I added a supernatural element. I put into it as much detail as I could about the kinds of things we did on picnics and I also made sure that my friends were as accurately depicted as possible. I even tried to be honest about myself. THE CORONATION PICNIC was published in 1989, as a Hamish Hamilton Antelope book. 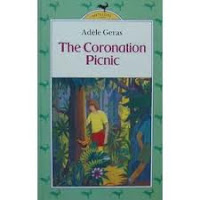 One of the things that happens in the story is a pretend Coronation. Because the book is out of print, I'm going to quote a longish passage:

"The children started singing. First they sang 'We Three Kings' because, as Tonia said, it sounded royal. Then they sang 'Rock of Ages' because it was dignified. Amy listened. When the hymns were over, the first words of 'God Save the Queen' rose into the air. Amy started walking slowly up the path in as stately a way as possible. The red and blue and white striped towel hung down behind her and trailed on the sand. Luise had chosen the place well. Trees nearly met over her head as she walked. She pretended she was really Princess Elizabeth, walking up the length of Westminster Abbey in a gown encrusted with jewels. As she knelt down in the sand and Ian put the wreath of creepers round her head, she remembered pictures Mrs Aston had shown them of the real crown, studded with gemstones the size of boiled sweets."

This is my way of saying: Happy Jubilee Year to Elizabeth II. I'm not a Royalist in any way but I have loved following the Royal Drama over the last sixty years and I look forward to lots more pleasure and fun to come. I no longer stick photos in scrapbooks, but I do enjoy reading about and looking at someone whose life and family I've been gazing at and thinking about since I was a very small girl. Vivat Regina!
Posted by adele at 07:30

Lovely stories, Adele. Interesting synergy of Hollywood and Hollyrood in a child's mind.

I was in hospital recovering from having my appendix out when King George died and it all seemed very momentous. Husband was taken to see the Coronation procession by his (Indian) mother but I had to make do wit the film screened in the local cinema.

Amazing that my parents had the heart to take us, since my oldest sister died (aged 19) at the end of May 1953.

My father was a telecommunications inspector for the British Railway and one of his jobs was to travel on the Royal Train in case Her Majesty ever needed to make a phone call.

Fortunately she never did, or my dad would have had to shin up the nearest telegraph pole in order to link up the instrument (and he was quite portly).

But I remember his telling us stories about the little prince and princess (Charles and Anne) running up and down the train.

I also followed the movie stars, Adèle, and shall console you by reminding you that Anne Miller had the best legs!

Thank you for a lovely trip down memory lane.

Gosh Mary, that is quite fascinating...and how tragic to lose a sister. Dreadful.

But this must be a post for you surely? It would be very good. Maybe in Jubilee year we could all put up various Royal linked posts. And yes, Ann Miller ( Or Anne Miller but I think Ann) did have splendid legs! I like her much better now that I'm no longer a child!

And Michelle...like the Hollywood and Hollyrood thing!

Lovely post, Adele - and such an iconic picture of the mourners. 'The Mourners' - that's quite a good title isn't it! Dare say it's been used many times before.

Terrific post - and I love the picture of the Three Queens. You can see an entire social history in that one photograph, through the differences in bearing and expression of the three women.

But this makes me feel very nostalgic for the days before the 'Royal Family' documentary, when Royalty were private and special rather than glorified soap stars. Maybe we were just more innocent then, and were able to admire our idols without a secret envy that longed to tear them down.

Thanks for sharing this. A lovely little glimpse of the past - and I hope you kept that scrapbook!

Lovely post Adele. I too kept scrapbooks books of movie stars and the princesses. I can remember sitting up in bed when I was ill and a big box of cuttings being given me and a pair of scissors and glue. I think sometimes I might even have pretended to being ill just for the pleasure of cutting and sticking. My scrapbooks have long been lost but recently I found one my father made of the Royal visit to South Africa where the Queen turned 21. Its startling to see them enjoying the simplicity and hospitality in the Jan Smuts household... where the single bathroom was an added-on corrugated iron room off the verandah. Yes... amazing that she is someone who has also been integral to my life since I was a small girl! Did you also have a little golden replica of the Coronation carriage? It was intricate and beautiful (and not plastic) with all those horses and horsemen and doors on the carriage that could open. Thank you for the reminder.

Thanks everyone! Dianne, I can just see you and come to think of it I might well have had a replica carriage. But I was a frivolous child and was keener on acquiring an elastic belt with snake head buckle!

I had that golden carriage, Dianne!