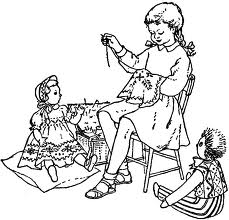 Some years ago, Mrs Hutchison (Top Juniors) placed a collection of small “prizes” across her desk.
Then, one by one, she called out her forty pupils in order of merit. When the almost-last child arrived at the desk, a small ball of grubby 3ply white wool was the best “prize” on offer.
She smiled maliciously as I took it, but a ball of wool had possibilities, as every maze-wanderer knows.
I never did knit, although I‘ve begun many times. It seems to need some clever left hand/ right hand co-ordination that’s not in my skill set My stitches end up the wrong way round more times than its worth inflicting on anyone’s patience.
Yet I’ve always wanted to. I enjoyed sewing too and treasure some old family sewing books. Both were such a big part of life in the past and they feel as if they are part of the whole lost “making of things” world.
Making or mending real usable things – not felt flower pictures or lego models – seems rarely part of the lives of children now. Inmy historical fiction, I long for my readers to visit a time when “making” happened.
For example, Mouse, my young Victorian hero, is befriended by the Aunts Indigo and Violet, both dressmakers for the Albion Theatre. Mouse himself lodges in the shop of Mr Tick, a clockmaker, and eventually much of the plot circles around the making of a “flying” device for a production of A Midsummer Nights Dream. Even the heroine, Kitty, is involved in real backstage laundry work. 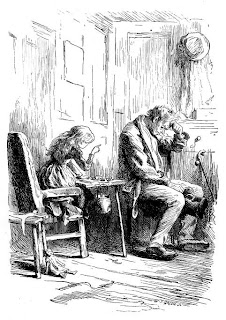 At dramatic storytelling level, such things have to be a general part of the setting. “Making things” causes problems by taking up too much time and holding up the action of the story.
Quicker by far to be Mossycoat and have a besotted pedlar bring you three beautiful dresses and your aged Ma stitch the green, leafy garment than to do it yourself.
Quicker to be Queen Elizabeth, with a Lady in Waiting counting the pearls stitched to your sleeves.
Quicker by far to order in your clothes and worry about the tailors bill afterwards. Better not be poor Jenny Wren trying to make a living of dressing dolls.
We still have examples of the wonderful stitchery of the past in museums and galleries and it is mostly anonymous. There is such light and shade in needlework. 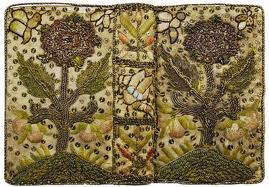 On one hand, there is the fancy sewing, embroidery and stitch-work, the domestic arts that occupied good middle-class spinsters, wives and daughters while they listened to gossip or music or books read aloud. Comfortable, even artistic. 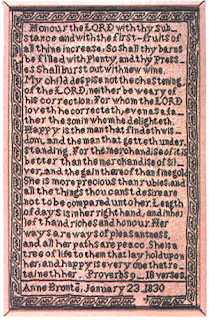 On the other, there has always been the plain and practical sewing, done by women and by men. Even my grandfather, somewhere in his soldiering, learned to sew and darn and mend with tiny, neat stitches.
So, by their poignant samplers, did many children, including Ann Bronte. These were the stitches that were intended to hold the home together, the family clothed and a respectfully bended head at all times. 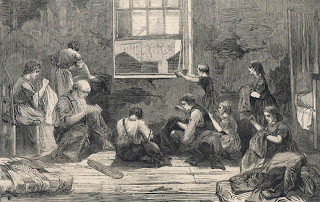 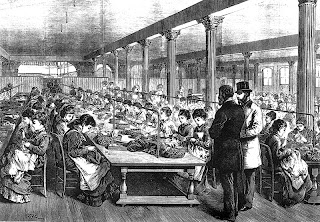 But stitchery is also a nicely portable skill, and was one of the few ways that young women could, with luck, gain independence.
Sewing could happen almost anywhere, from comfortable home, dressmakers shops to places less lovely.
At one time there were the hordes of poor tailors hidden in backstreet hovels. Later there were the vast sewing rooms of the late Victorian industrial age.
Was this last choice better for the young woman than life within the same four walls with the same faces or was it worse? 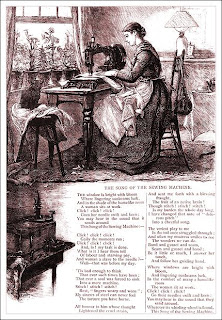 This advert on the left parodies a doleful ballad, The Song of The Shirt, converting it to the joy of the good housewife's new toy.

Yet even as the sewing machine liberated the home dressmaker,  it also produced more industrialised sweatshops across Europe, North America and beyond.
I must admit these harsher aspects of “making” are ones that I've included in any stories but maybe I should? After all, that kind of sewing continues in another country, but not in the one called history.
Meanwhile, I'd like to end on a more cheerful note. Some spirits can't be worn down

Great ending to an interesting blog, Penny. I'll be humming the Sewing Machine song for the rest of the day until I turn to my own sewing machine in an attempt to finish the Tudor costumes I'm making.

I never heard the sewing machine song before - great! I used to sew a lot. The first time I made a dress I waited till my mother had gone out and then attacked the sewing machine - it was an old electrified Singer. I was determined to master it without anyone else's help. The air was blue... I always had a very love/hate relationship with sewing machines - mostly hate. But knitting - ah, knitting! The short cut to tranquillity.

Well, mostly. Once I realised after knitting about 18 inches of a fairly complicated piece that I'd made a mistake right near the beginning. I was mulling over whether to undo it or not, and my dad said mildly, "Well, no-one else will probably notice. But you'll always know it's there." I undid it.

I can knit and crochet(which I prefer) but for sewing I bow to my sister, who was the senior partner when we made three flowergirl dresses last September.

Our mother was taught smocking and draw-thread work by nuns at her convent school. Never attempted that but I could do simple embroidery stitches.

They all seem to be dying arts now. Lovely post!

I remember my mum singing this song around the house. Thanks, Penny, really enjoyed this post.

As some of you might know, I am completely obsessed with sewing, embroidery, quilting etc and I've "used" them all over my work. And I'm a fanatical knitter. Thanks, Penny for a truly lovely post! And it's a shame that the crafts are no longer taught as much...I'm happy to say my granddaughter aged 9 has now asked me to teach her to knit! Hurray!

I feel for you, Penny, and the grubby ball of three ply. Those were the days, eh? You reminded me of my own Junior School. I was hopeless at knitting, being left handed, and I used to sneak my knitting home for my mother to re-do because I kept putting on stitches and I lived in dread of Miss Lawley finding out... You brought it all back. Lovely post!

Thanks all! Liked the way the words were so ironically. You can find the dreadful words of The Song of The Shirt poem on google, and there's a much sadder song on YouTube. Called "The Song of the Sewing Machine", it was sung Fanny Bryce in 1927.

As January is not the brightest of months, I thought the cheery option was better. I'll leave you to find those and a box of tissues yourself, History Girls!

Interesting post and I loved the song -all that mugging and eye rolling is so music hally. I confess I'm useless at all crafts- used to read under the desk when I should have been knitting and sewing! ( A quietly naughty girl)