When and Where and Witches: N M Browne

It isn’t surprising that our own personal histories influence our choice of historical periods, or indeed of places. Most of my writing is set very firmly either in the somewhat bleak Lancastrian landscape of my childhood home or in the South Wales that my parents always regarded as home. It is surprising then that I have ignored the most obvious historical story associated with my bit of Lancashire, the story of the Pendle witches. Ann Whittle alia Chattox was examined and confessed that she ‘feloniously practised used and exercised divers wicked and devilish arts called Witchcraftes, Inchauntementes, Charmes and Sorceries in and upon Robert Nutter’ in the very village where I grew up that is ‘at the Fence in the Forrest of Pendle.’
I haven’t been back to Fence since my parents returned to Wales, apart from a brief visit with my children. I think my kids struggled to connect their cappuccino-loving, resolutely urban mother with the wind blown wildness of Pendle but I have carried that landscape with me into my southern life, into my fiction and sometimes into my dreams. It has taken years, a slew of newspaper articles and a rather good BBC dramatisation of the story with Simon Armitage to remind me of what every school child in the area used to know, the story of the witches hanged at Lancaster in 1612.
I’ll be honest I wasn’t very interested in the story as a child it was muddled up with the area’s tourist industry, but the discovery of a seventeenth century ruin, the press are keen to identify as Malkin Tower, has re awoken my interest. 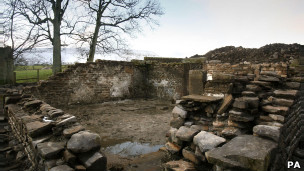 It would be a coup for the never very vibrant tourist industry to have unearthed the place where the convicted women all met to feast on a stolen sheep on Good Friday 1612 - and perhaps an unlikely one.The rediscovered building probably isn’t Malkin Tower - it is too isolated, and too recent a building to be the home of poor women, trying to scrape a living from midwifery, herbalism, and begging. That doesn’t matter, the story has begun to live a little in my head.
I don’t know if any publisher will want another story about these women, but I am intrigued now as I wasn’t as a child by what they thought of themselves, by the way they lived, by the religious politics of the time and of course by the place.
It’s a hard country, historically a land for hunting, for sheep,cattle and cloth making, The winds there slice through to your bones, there’s the grey rain and the greyer mists and in the centre of it all the oddly shaped hill, the runt of the Pennines, the place that haunts me still, Old Pendle itself. This may be a story that I just have to write.

The newspaper article
The television programme
Posted by Nicky at 08:01

I decided to write my third novel based in my UK home town. Something I vowed I would never do, however,the historic facts I have found have been fascinating. The tourism stuff I had absorbed as a young girl, soon flew out of the window.

This is fascinating, Nicky. I saw the programme Simon A did and thought it was fascinating. I for one would be very happy to read a novel set in Pendle and about the Witches. Joseph Delaney has become the Bard of Pendle with his series but I'm sure there's room for a completely different kind of book with a totally different approach. Hope so anyway.

Two 'fascinatings' within two lines. You can tell I'm a writer, can't you? Too early in the day is my excuse.

I caught the Simon Armitage programme quite by accident and was enthralled, if that's the right word for such a bleak & disturbing story. I had known no details about the Pendle 'witches' before. I would say: go with your instincts. It sounds as if this story resonates deeply with you - it lives somewhere in your gut, if you like! That's very important, in my view. Don't think of it as 'another' story about these women - but your unique story. Maybe it's significant that your interest is being kindled at this point in your life... maybe now is the time... Sorry, I will stop pontificating! But, for what it's worth, I say: go for it, and I would love to read the result!

I recommend Mary Sharratt's retelling of the story: Daughters of the Witching Hill.

It's a landscape I know well and I'm looking forward to your account of the Pendle witches. The story is fascinating. There's a strong feminist and socialist slant too - it was usually women and poor women at that, sometimes old and suffering from dementia. As an absent minded poet, wandering the moors muttering verses, I'd probably have been burned at the stake as well!!

I am Lancashire born and bred but I didn't connect with the story of the Pendle witches when I was a child because, amazingly, I lived in the 'other' Lancashire - the solidly industrial bit. It's a great story, Nicky. Just write it your own way.

I visited with friends who live near Pendle Hill several years ago and thought it would make a great location for a story, either historical or time travel. Go for it!

I think you have a great plot for a book....and I for one......look forward to the finished product!!