Wedding Cake, anyone? by Imogen Robertson 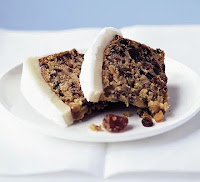 I’m getting married this weekend, and frankly the way my brain is at the moment you’re lucky this post doesn’t just consist of that sentence repeated again and again. Still, I can’t think a non-wedding related thought, so forgive me and I promise I have got some history in here somewhere.
Ned and I have gone for a do-it-yourself type of affair. We’re having the party in an eighteenth century barn on a working farm belonging to friends of friends, and I knew it was the right place for us when I walked in there, looked up at the beams and said, ‘Oh, darling! It’s just like the barn where Harriet and Crowther performed their first autopsy!’ Ned teared up a little and squeezed my hand.

The beef is roasting in our kitchen as I type; we’re collecting most of the rest of the food from Borough Market tomorrow morning, and my mother has made the wedding cake. Now, when we asked Mum to make the cakes it was for reasons both practical and selfish. Yes, huge fancy wedding cakes with icing roses and corinthian columns can look lovely, but they aren’t very us and I love my Mum’s fruit cake. I can also pay her with a big smile which helps the budget. Now, what I didn’t realise was we are actually being quite eighteenth century about it. Hannah Glass’s bride cake recipe from her The Art of Cookery, 1774, is really very like what we are going to eat on Saturday, only Hannah places her candied orange and lemon in layers within the cake rather than mixing it all together. I think Mum would have cried if I’d asked her to do that. I also think Mum’s used a little less brandy than Hannah’s half pint per cake. We’re having almond icing like just Hannah’s, though I don’t think Mum whisked it for ‘an hour or two’.

Even the question of fancy icing versus plain is centuries old. In English Etymology 1783, George William Lemon notes that the ceremonial cake had its roots in Roman times, then continues, ‘ - but whatever were the ingredients of the antient bride cakes, the modern are made of such costly articles, that the wealthy now-a-days seem to vie with each other more in the extravagance of the composition than in a knowledge of the institution.’ Indeed.

The tradition of sleeping with bride cake under your pillow to make you dream of your future husband or wife was already established, though in a volume of The Spectator from 1776 a correspondent reports trying this, only to wake to find he couldn’t remember his dream, and he had eaten the cake. Perhaps his experiment failed because he didn’t pass his bit of cake through the wedding band as soon as the wedding rites were over. No one is going to try that at my wedding, I’m afraid. Once the rites are over the ring is staying on my finger and anyone trying to shove cake through it is going to get my hard stare. The writer of an article in The Connoisseur in 1775 did much better, the bride cake under the pillow providing a long allegorical dream of different brides and grooms sharing differently iced cakes that illustrated the wisdom or folly of their marriages. Moral lessons through cake. Who would have thought? 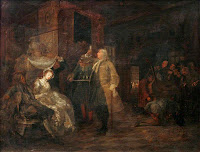 One note brought me up short; in the Lake District it was traditional to break the bride cake over the bride’s head. Sounded like a terrible waste of good cake to me and very messy, so I was delighted to learn in this case the cake was ‘a thin current cake’ and a white cloth was placed over the bride’s head before she was attacked with confectionary. Still, I’ve no idea where that tradition comes from or what the underlying symbolism is. If anyone knows, please share. According to John Nichols in Anecdotes of William Hogarth of 1782, this is about to happen in Hogarth’s third sketch for the ‘Happy Marriage’ series he planned but never finished. At least it looks like a good sized sheet.
Posted by Imogen at 01:00

Thank you for this generous glimpse of wedding history and your own lovely wedding. Congratulations - and many good wishes for your happy day and every day that follows.

Imogen, you are brilliant to make time to write this when you must be up to your eyes in pre-wedding hassle. Many congratulations and all good wishes for a really special day - and many of them in the years ahead.

And I love this kind of 'real people' history. Worryingly, I also like the sound of Hannah's cake with the half pint of brandy. Mmm....

I'm so impressed that you're able to write anything, just before your wedding. I hope you have a wonderful day - the start of many wonderful days.

Lovely post - I can't imagine how you found space in your head to write it! Have a wonderful day on Saturday.

Happy day, broken cake or not!

In Denmark in the 19th century, it was traditional to eat a beef and prune stew at the wedding dinner and spit the prune stones around the room. A detail I chose not to include. Sometimes progress is to be welcomed.
Have a wonderful wedding, Imogen, and all the best to you both.

Hope Saturday is wonderful for you and many happy anniversaries to follow!

What a lovely post! Have a brilliant wedding and a happy life and enjoy your mother's cake which sounds heavenly. We will expect PHOTOS of the dress, somewhere, sometime....

Enjoyed the article and congrats on your forthcoming nuptials. To add my own bit of wedding cake lore. The bride and groom that decorate the top of a wedding cake is the modern version. At one time the decoration was an image of a pregnant woman, or a cradle!

Hope the sun shines on your wedding day - many thanks for another interesting post.

There's magic in wedding cakes - and I hope yours is stuffed full of good magic in with the currants and raisins...

Agree with Adele - there must be photos!

Fascinating post, and many congratulations, Imogen - I hope you, Ned and your cake all have a lovely day! (And I do like the idea of that prune-stone-spitting, Marie-Louise! Was it a way for the two families to break the ice with one another??)

Many congratulations, Imogen! I hope tomorrow all goes off wonderfully well and that your mother's lovely cake goes into your mouth and not through rings or over your head. Thank you so much for posting in the circumstances - perhaps this counts as something old...All best wishes to both.

Congratulations for tomorrow and may you be very happy!

What a tasty blog. And huge congrats on your upcoming nuptials! Hope you have a fab wedding. Maybe we'll get that post ceremony blog with pictures? :-)

Thank you all for those kind wishes, much appreciated. I like the prune spitting too! Will let you all know how it goes and there will be pictures somewhere...

What a delightful post! And amazing you could squeeze in time to do the research let alone the writing. Hope your history-based wedding goes beautifully!

What a delightful post! And amazing you could squeeze in time to do the research let alone the writing. Hope your history-based wedding goes beautifully!

Sorry about the duplication, must have pressed Publish twice.

Congratulations Imogen, I'm so happy for you. Do you know that 23rd of June is a very special day in Poland? We call it "Sobótka". "Traditional folk rituals include groups of young men and women singing ritual songs to each other. The young women may wear crowns fashioned from wild flowers, which are later thrown into a nearby pond or lake. The boys/young men may then swim out to claim one of the crowns. Bonfires (and bonfire jumping) are also part of the proceedings." My english is not very good, so please forgive me, I copied the description from wikipedia. Anyway, 23 rd of June is considered a very lucky day to get married. Once again I wish you all the best. You are my dearest writer.

That would be the hardest part in preparing a wedding. Wedding cake is the most important in reception, that's the center attraction. You should chose the best and the delicious one. Thanks for sharing !