WHAT'S IN A NAME? - Dianne Hofmeyr 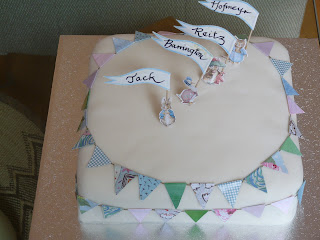 It seems cakes are featuring heavily on the History Girls Blog of late. But the combination of Imogen announcing ‘I’m getting married this week-end’ and my grandson’s naming ceremony this past week-end has made me think about why traditions and ceremonies for certain occasions are so universal and enduring.

Jack’s name was given him by his sister because she has a boy doll named Jack. Barrington was a great grandfather’s name on his mother’s side, Reitz was a great grandfather’s name on his father’s side and the surname Hofmeyr stems from the Mayor of the Court who was the power behind the throne in the Merovingian dynasty. So all very simple... and as a writer not an icer, I decorated the cake with paper bunting and paper Beatrix Potter characters with paper flags announcing his names.

Back in history and in many other cultures the giving of a name was more complex. In Luo tribes, a name for a baby is quite practically decided while the baby is crying. Various names of dead and living ancestors are called out and when the baby stops crying at the sound of a name, it’s believed the spirits wanting this name have been appeased.

In Nigeria a baby’s naming ceremony is celebrated by eating foods that will give the baby certain strengths. Gin or strong drink (protecting the child from becoming an alcoholic). palm wine (libation), chalk mixed with salt (symbolizing happiness), honey, sugar, and bitter kola nuts (duality of life’s bitter and sweet qualities), crocodile pepper (not sure how safe this is but said to be for invoking energy in the child’s speech), coconuts (representing mystery, secrets, and the unknown), yams (staple food of the Edo people), palm oil (symbol of emollient for life’s problems) and water (representing fluidity and having no enemies). And water is the main symbol of renewal and purity in Christian baptism, symbolising a new birth into water as the baby is named.


In Roman times the naming day was much more important than the date of birth. The praenomen was the first given name for a baby. In 100 BC there were only about 18 praenomens commonly used. The second name, or nomen, referred to the clan of the child's family. The cognomen, the third name, referred to the newborn’s family branch. Tiny metal trinkets, were strung around the baby's neck by the guests. The clinking noise was to amuse the child and was also for warding off evil. In addition the child was given a bulla – an elaborate locket made of gold in the case of the wealthy or leather if poor. It contained charms to ward off evil and was presented to the child on the day of birth. A boy removed his bulla only after he received his toga virilis, signifying his Roman citizenship. A girl removed hers on her wedding day.

The giving of trinkets, charms, amulets and rattles has always been a naming day tradition. Rattles at their most basic – toys to divert babies – go back to the 2nd century BC. They’ve been made in materials ranging from dried gourds, seedpods, woven sticks, hollowed-out tortoise shells and bones, to much more elaborate styles in glass, silver and gold which were handed down as heirlooms, such as the gold one in the photograph further down which belonged to Shelley and is marked B*S 1792. Victorian rattles were particularly elaborate and usually made of silver because of its anti-septic qualities.

Successful rattle designs combined several purposes. Some truculent children found them good to throw, or use as hammers or weapons. The addition of whistles and bells was to amuse the child but in more superstitious times, was also to scare away evil spirits. Some had teething rings or sticks for the baby to chew on. These were traditionally made of a hard red or white substance, like coral, bone, mother of pearl and ivory – the red symbolising blood, the white bone and the use of bone or ivory also conferred the strength of that particular animal to fight off the pain of teething.

Not having any antique rattle heirloom to give to Jack Barrington Reitz Hofmeyr, I made him a book of his personal history – of his roots that not only go deep into the green hills of England but deep into African soil as well. I hope he’ll enjoy the snippets, the poems, the alphabet made from animals and butterflies on African stamps, the old yellowed photographs, the receipt for a string of pearls (the receipt still with me but where is the necklace?) the letters tucked away into secret envelopes, one from a great great great grandfather written to his sisters back in San Saba, Texas explaining why newly arrived in London at age 16, he felt compelled to change his middle parting to a side parting, the packet of bright red and black African lucky beans and the fold-out maps with arrows and circles that explore his origins.

‘For it’s through our names that we first place ourselves in the world. Our names, being the gift of others, must be made our own. They must become our mask and our shields and the containers of all those values and traditions which we learn and or imagine as being the meaning of our familiar past.’
- Ralph Ellison

Great post, Dianne - and that looks a gorgeous cake too! You're clearly following a long tradition with your Beatrix Potter figures, because the 'silver cat rattle' is surely 'Tom Kitten'.

The rattles are especially fascinating. Do you think this might be the true origin of the phrase 'bells and whistles' to describe all the 'extras' one might add to a basic object? I've seen theories about steam trains and cars etc, but this seems much more likely.

Yes... as I was putting up that picture I realised it was Tom Kitten... such a co-incidence and funny you should mention the 'bells and whistles' as I wondered about it too. It seems likely. Does anyone know?

Wonderful post! I'm fascinated by the whole subject, & especially by what names people choose for their children and how they make that choice... In some European countries your 'name day' (i.e. the day of the saint whose name you share) seems, as far as I can gather, like another birthday, too.

Great post - wonderful photos - and your gift to young Jack sounds a rich one indeed. Thanks for posting!

Fascinating! May I mention this post in my blog, which, spookily, this week also muses on the topic of names?

Beautiful - especially your description of that so-precious book for young Jack.

So now I'll think of people like Shelley as having a golden rattle not a silver spoon in their mouth.
A great selection of pictures.

And a delicious, imaginative cake.

Thank you for the comments. I enjoyed the research... found it fascinating that rattles were seen as such a strong protection against evil or bad spirits. Saint days were certainly celebrated at my school which was a convent. But I never did find a saint called Dianne. It was the Marys and the Ursulas and the Theresas who got to celebrate twice. By all means mention it Pauline... lovely synchronicity!

Coming late to this marvellous post! Your Jack is LUCKY to have you as a granny! The cake looks super too. What was it inside? Do tell.
I am named for my aunt Adele who died before I was born. Not usual to name Jewish children after living relatives but dead ones ARE honoured in that way! And the photos are totally fascinating. Thanks!

As a new grandmother I found this post enchanting. My granddaughter has my Christian name as her middle name, which I in turn received in honour of my father's sister, who was named Frances after her father's sister. I love the continuity here. Thank you for a most enjoyable read.

Great to pick up on Jewish traditions Adele... makes sense though. I can never understand fathers that give their sons their exact names.

And you need to start a book for your granddaughter Frances. I found out things about the family I never knew and you can play a bit with sticking in stuff so it doesn't get too tedious for you as the maker. And even if this granddaughter doesn't appreciate it maybe a great great grandchild will.