A Brief History of the Olympic Torch – Katherine Roberts

As this post goes up, the Olympic torch will be on its way around Britain as it makes the long journey from Olympia in Greece to reach the 2012 London Games. It has already passed through my local town, where it was greeted by flag-waving children and excited people like me (wishing they were taller!) trying to get a decent photo:

Sport and sponsors
The torchbearer was accompanied by a surprisingly large convoy of vehicles, with the sponsors taking the opportunity for some roadside advertising. Here is the bus that collects the runners after they have passed on the flame (spot the torches!): 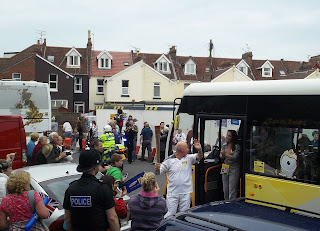 Propaganda
The torch has been a symbol of the modern games since 1928, when it was first lit on the Marathon Tower at the Olympic Stadium in Amsterdam. But the tradition of bringing the flame from Olympia by relay was actually started by the Nazis in 1936 for the controversial Berlin games as a propaganda exercise, linking the ancient Greek athletes (believed by Hitler to be an early example of the Aryan race) to the German Reich.

Peace and friendship
These days, the Olympic flame represents friendship, unity and peace. It is lit by the sun’s rays reflected in a mirror at the site of goddess Hestia’s ancient temple in Olympia, Greece. Then it is transported by relay to the current location of the games, mostly carried by runners on the road, but also by various inventive ways over (or under) sea and land between:

1948: flame crossed the English Channel by boat
1952: flame flew for the first time by aeroplane to Helsinki
1956: flame carried on horseback to Stockholm.
1976: flame transferred by a radio signal from Athens via satellite to Canada, where the signal triggered a laser beam to re-light the torch (my favourite!)
2000: flame carried underwater by divers near the Great Barrier Reef
2012: flame flew on a plane called “Firefly” from Athens to Land’s End to start its journey to London.

Religion
At the ancient Olympics, the flame did not have so far to travel since the games were always held in the same place as part of a five day religious festival dedicated to the god Zeus. In those days, the torch relay was a religious procession, when victorious athletes carried the sacred fire from the temple of the goddess Hestia (where it burned permanently), around the altars of the various gods and goddesses in the precinct, finishing at the temple that housed the famous statue of Zeus Olympia - one of the Wonders of the Ancient World:


The Olympic flame plays an important part in my Seven Fabulous Wonders book "The Olympic Conspiracy", which is set in 328BC at the 113th Olympiad, shortly after Alexander the Great burned Persepolis as part of his Persian campaign. I was fascinated by the fact that both the Greeks (with Hestia’s fire) and the Persians (with their religion of Zoroaster) had eternal flames that were never allowed to go out. So I linked these fires in my plot for the book, and invented some Persian sorcerer-terrorists called the Warriors of Ahriman, who disrupt the Games by using the sacred flame to bring a Persian army into ancient Olympia:

The Warrior raised his arms against the brooding sky, purple flames flaring from his hands, and cried in a terrible voice:
“DEATH TO THE WORSHIPPERS OF ZEUS AND THE FOLLOWERS OF ISKANDER!”
A terrified hush descended over the Altis. People seemed frozen with shock. Then someone shouted, “It’s a Persian sorcerer!” and panic broke out as everyone tried to push out of the enclosure at once. The crowds were so thick that blockages formed at the gates, and those who climbed the walls found themselves trapped by yet more crowds outside.

(History Girl disclaimer: This situation is very unlikely to happen in London, which we're told will have much better security and fewer sorcerers.)

Clearly, the Olympic torch has meant many things to many people since the fire was first lit on that ancient altar at Olympia. Religion, sport, propaganda, peace, a symbol of the modern games, inspiration for a story… what does the Olympic flame mean to you?

"The Olympic Conspiracy" is one of the Seven Fabulous Wonders series, first published in 2004 by HarperCollins and now available as an ebook for Kindle:
£1-99 from amazon.co.uk
$3-99 from amazon.com
Posted by Katherine Roberts at 04:00

I love the idea of the flame that is never allowed to go out. Last week it came to Shropshire and we watched it being carried over the famous Iron Bridge.

Fascinating, Kath. My favourite is the ignition of the torch, long-distance, by laser beam, too. It seems a fitting way to unite past and present.

Ann, how lovely the torch crossed the gorge over the old Iron Bridge! I've actually danced on that bridge with the Iron Men & Severn Gilders morris dancers... that's Severn as in the river, and Gilders as in the pottery gilders... hmm, I think I feel another History Girls post coming on.

Yes Sue, the laser did sound cool. I wonder how many other inventive ways the flame will be passed on in future? (and now you've got me thinking of Katniss' cloak of flames in the Hunger Games...)

I'm sure the 1956 version was done with galloping horses but at the moment the "flame by horseback" conjures up a torch-bearer taking a pleasant amble in the sunshine, possibly calling into village pub awhiles, rather than a Ghent-to-Aix race. The lazer version is my favourite too!

I don't know if the horses galloped, Penny - that would be quite dramatic! I imagined them trotting gently, like the runners I saw carrying the torch... does anyone know how fast the horses actually went in the relay of 1956?