Reading a couple of recent History Girls blogs about maps – one by Teresa Flavin and one by Katherine Langrish – I got very excited. I LOVE maps! Who doesn’t?
Maps tell us where we are… and when. But they don’t just set the scene, sometimes they are crucial to the plot. A map can serve as a talisman or a plan. They can tell us how to reach the World of Adventure or where to dig for Buried Treasure. A map at the front of a book shows a certain commitment to accuracy. (Even in Fantasy novels, where the world is invented.) Recently a map even gave me the idea for a character.
My motivation in writing historical fiction is to travel back in time. What better way to step into the past than via a map?
On my first date with my husband-to-be Richard, an English graphic designer and historian, we knew we were ‘meant to be together’ because we were both reading and loving Patrick O’Brian’s sea-stories. There are no maps in the Aubrey-Maturin books, so I suggested that Richard write a Companion, and he did. He ended up drawing about a dozen for The Illustrated Companion to Nelson’s Navy.
For my Roman Mysteries series, I spent many happy hours wandering the ruins of Rome's ancient seaport and poring through the guide books. Then Richard and I put our heads together and came up with our own version of a map of Ostia Antica in the first century AD. I put Flavia’s house in an unexcavated part of the site and filled in blank places with my imagination.
Richard and I then worked on a map of first century Rome, (being careful NOT to put in the Aurelian Wall of two centuries later.) Nobody knows what Pliny’s Laurentum Villa looked like but architects over the years have had a go. So did we, for the fifth book in my Roman Mysteries series, The Dolphins of Laurentum. Richard also made me a map of the Bay of Naples, the two ports of Corinth in Greece, Ephesus in Turkey, the Acropolis in Athens, Domitian's villa on Lake Albano near Rome. Just to name a few.
I think my favourite collaborative map with Richard is our Upside Down Egypt map (right) for The Scribes from Alexandria. I’ve never seen anything like this done anywhere else. It shows how the Romans perceived Egypt. A map oriented like this explains why the delta is so called. Upside down, it really looks like the capital letter Delta: △. And it explains why you didn’t sail down the Nile from the Delta, you sailed UP it.
Moving on to the Wild West, Richard and I had a somewhat easier job of making maps. My new period of research is only 150 years ago, rather than 2000, and there are many great resources.
Our map of the Washoe in 1862 (top of this blog) was easy. Richard just consolidated a couple of existing maps and then traced them with a dip pen, making sure to add a few realistic smudges. However, for our map of Virginia City, he put in several months work. I had a very specific vision of what I wanted it to look like. Richard would bring me a map, I would mark it up and hand it back. Sometimes he felt like a dog playing ‘fetch’ and would patiently bring the latest version in his mouth and drop it on my desk. The result of more than fifty drafts is below.
At the moment Richard and I have been researching Carson City, Nevada. It was founded in 1858 when four friends tramped over the Sierra Nevada, the mountain range dividing California and Nevada. Curry, Musser, Proctor and Green chose a random plot of flat land in the high desert, surveyed it and divided it into a hundred plots. They named the streets after themselves (you can do that when you found a city) and they ambitiously called the hamlet "Carson City" after the famous explorer Kit Carson. They chose wisely. A year later silver was discovered a few miles north on Mount Davidson. Carson City city grew and grew, and today it is the capital of Nevada.
Thanks to the wonders of the internet, I can now zoom in on high resolution maps in various archives and libraries and get a really good look. One of my favourite maps is Bancroft’s Map of the Washoe of 1862, the year my Western books are set.
On another more crowded and less accurate map by DeGroot (above right) I spotted a district called Blue Supper near Carson City. This curiously-named region is not marked on any of the other maps I have seen. I've tried to find out more about it but failed, so I decided to make something up. Towns as well as streets in the West were often named after real people. So why not Blue Supper? In my third Western Mystery, Blue Supper is not just a place but a flea-infested hermit in a rabbit-skin robe who rescues my hero from quicksand and a blizzard. 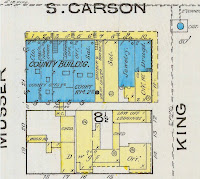 Recently I came across a wonderfully detailed map of the part of Carson City where The Case of the Pistol-packing Widow will be set, with a plan of the now-vanished County Building. Built by Old Abe Curry, one of the four founders of Carson City, this sturdy sandstone structure was used for the Second Territorial Legislature in November and December of 1862. Thanks to this superb map, I can locate the outhouse, the stairs and the alley behind the building. I can also match the map to a crystal clear period photo (above) to confirm that the saloon was the Magnolia Saloon, the barbershop had the classic candy-cane striping and the sidewalk was sandstone not boards.

Zooming in on other areas of this fabulous map, I can see stables, saloons, banks, the carriage house next to the stables, a Chinese wash house, a cracker bakery, several gunsmiths, a fire engine house, a smoke house and even an old skating rink, not the first thing you think of in a Western town. The key to the map (right) shows that buildings were made of stone, brick, wood and 'specials' like tin or cloth. It tells us how many shutters on the windows, whether a roof is slate or tin. You can even see where cisterns lay for the use of the fire companies.
Maps are a wonderful way of getting to grips with the geography of your period and helping your reader understand it, too.
And it's always useful to have a graphic designer around the house.
Thank you, Richard, my husband of nearly twenty years!
Caroline Lawrence's second P.K. Pinkerton Mystery, The Case of the Good-looking Corpse, for Western-loving kids aged 8 - 80, is out this week. The maps and chapter header drawings are visible in the Kindle format. .
Posted by Caroline Lawrence at 00:10

I do like it when books have maps - you can find out where you are in the story! When the book takes place in a real location it is even better if you can actually see the place where something happened. Sadly, that does not happen very often in Australia.

Fantastic - I love them! Upside Down Egypt particularly caught my fancy. Maps help you 'own' a place - or indeed a story. How wonderful to be able to commission your own! Your post also reminds me how touched I was when I saw that the book designer of the Japanese edition of GIDEON THE CUTPURSE had gone to endless trouble to piece together a map of the protagonists' journey from 18th-century Derbyshire to London, complete with tiny figures. That Japanese map made me see my own story with fresh eyes. Good luck with P K Pinkerton no.2.

Have just finished PKP2 and am in awe of how absolutely real 19th C Virginia is - you obviously know every turning, every alleyway. Having an in-house map-maker clearly pays off - marvellous!

A wonderful post! You are lucky to have Richard and vice versa. I also loved the upside down Egypt map. How very logical!

What a lovely collaboration and meeting of minds and talents. If you weren't both so exceptionally nice, it would be tempting to be jealous!

I AM jealous, Michelle, and make no bones about it! I love maps and have needed them for all my books so far, but never had the sense to marry a graphic designer.

They're really wonderful maps, Caroline. Like all the best ones, they make me want to read the story that will bring them to life. Great post - thank you.