A TIME FOR TRAVEL: Penny Dolan 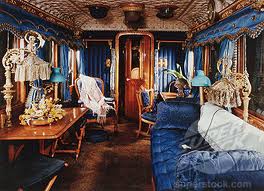 There wasn’t quite enough light to see in through the window, but one could glimpse the pretty blue blinds, a touch of gold fringing and an ornate gilt light fitting. This was once a very fine coach indeed.

Did Victoria enjoy travelling in her own special railway carriage? Was she impressed with the magnificent coat of arms on her engine or did she, barely notice it was there?

Still, it wasn’t Victoria’s Jubilee that was being celebrated at National Railway Museum in York that weekend. The historic Royal Carriages are all kept in a siding within the main building. Instead, tying in nicely with the current Queen’s 60th anniversary, the museum was holding its 2012 Railfest, and how. 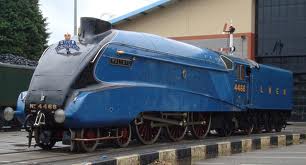 The deserted acres of the old railway yards –  those not now covered by new housing -  were full of engines, carriages and a variety of maintenance machines. At the edge of the festive crowds and bustle were the weeds and broken sheds and disused tracks of this once-mighty railway hub: the shadow behind the air of nostalgic celebration. 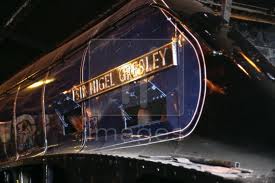 Some of the most important and record breaking exhibits – the Mallard, the Sir Nigel Gresley, the Flying Scotsman, and more -  had been brought out from the Museum Hall.

They stood in the sunshine, surrounded by staff and volunteers, admirers, photographers, enthusiasts and general hangers-on. 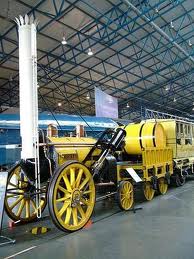 The display ranged from the start of the railway era with a Puffing Billy replica,

Stephenson’s bright yellow Rocket was there with its duo of carriages, both closed and open, as well as a large coal truck from the Middelton Works, near Leeds, one of the earliest industrial railways. 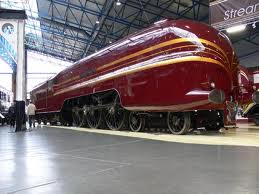 For now, the elegant silver-blue Battle of Britain Memorial Flight train was named and honoured with a flypast of its own that very afternoon. People gazed at the sky, with memories and tales of memories of their own, while children played happily on the climbing frames and swings, as they should. 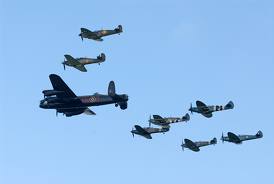 It was a busy day. Here and there, engines in full steam puffed up and down short stretches of allocated track.

All around, men in out-of-date railway uniforms shovelled coal into boilers – ready for Richard Hannay to leap on to the footplate - or brandished oily rags and cans at their iron horses or just hurried around like so many Perks’s from The Railway Children.

The volunteers sauntered about, grinning with casual authority, employed as perhaps they once had been. They took turns refusing entry, offering safety advice and gathering in small, select gangs exactly where they could interrupt keen photographer getting a clear shot of their engines. 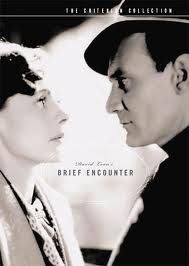 The day was an enjoyable romp, but what will I take away from it? One or two plot possibilities but mostly the kind of memories that, when taken with a pinch of imagination, makes time-travelling fiction read more believably.

The hard wooden benches in the third class carriage. The black billowing smoke choking the chest. The tarry reek in the air, everywhere. The faint covering of dirt everywhere: on the handkerchief, underfoot, on the now unveiled face and ungloved hands. The constant noise. The heat and the cold. The waiting around and watching out for the unfamiliar. The continual labour and toil that bound teams of men together. The god of the timetable and the lists records broken, often in a kind of vanity.

And of course, for a certain era, the small particle of grit in the eye.

My Railfest time travel will be useful but was not very adventurous. Now I’m wondering what “real research” transport experiences are out there for History Girls and Boys? Do tell.

"the kind of memories that, when taken with a pinch of imagination, make time-travelling fiction read more believably."

That's it exactly - all it takes is the one tiny detail and an entire scene gets the kiss of life.

Thanks for posting - and I LOVE Queen Victoria's carriage!

Wish I was near enough to go to this - I love steam engines! I have notes from conversations with my dad about when his dad took him to see the Royal Scot, which must have been in the early 30s.

For my money the best railway scene ever is when Greta Garbo gradually appears as the clouds of steam part, and sees Vronsky for the first time, on the station platform in Moscow, in Anna Karenina...

This is lovely, Penny! I love trains and have vivid memories of steam still in the late Fifties, early 60s. What fun those trains were, with their compartments and luggage racks.

Thank you for those lovely sensuous memories. Knowing the way you write, they'll be deployed wonderfully somewhere.

I wish I was on the Duchess of Hamilton right now, sipping something tall in a jolting glass.

A lovely piece, the mention of the smell of tar put me right there - but I never knew the steam age - I must have travelled in time.