Here, for example, £2.50 will buy you the 1894 map of Greenwich and the Isle of Dogs, on the massive scale of about 15 inches to the mile, with every dwelling house detailed, plus trees, railways, jetties, wharfs, the positions of stoneworks, shipbuilding yards, manure works, the South Metropolitan Gas Works, soap works, and the General Steam Navigation Company.  Here's a portion of it: 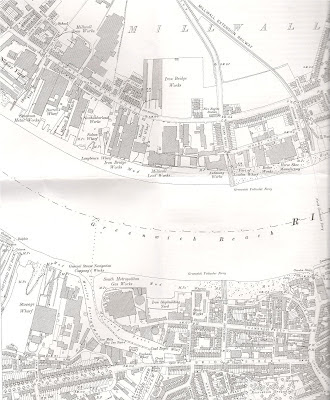 But that’s not all. Turn the map over, and you’ll find not only an essay on the history of the area covered by the map, but – oh frabjous day! – lengthy facsimile extracts from relevant Post Office directories, listing the very names and occupations of all the people on the various streets. And these are utterly fascinating. Look!


Now what strikes me about this (apart from the magical bird’s eye view of the street, rather as if the roofs had been lifted off the houses so we could see inside), is that out of those 18 commercial addresses, no less than seven belong to women running their own businesses – which is getting on for 40%. And what a range of occupations they are in engaged in, too! A pawnbroker, three chandlers’ shops, a greengrocer, a coffee room proprietor, and a butcher! On other streets we find women furriers, bootmakers, confectioners, laundresses and drapers; women running refreshment rooms, fruit shops, tobacconists, newsagents, restaurants and libraries.

Let me repeat: actually in charge of their own establishments.

And lest you think this unusual, or perhaps limited to riverside areas, let’s look at 19 addresses on the west side of Drury Lane, where the 1892 directory gives us Mrs Julia Kelf, tobacconist, Mrs Ellen Marshall, confectioner, Mrs Maria Marion Snellgrove, landlady of the Marquis of Granby, Mrs Josephine Winnig, clear starcher, and Mrs Jane Beech, cheesemonger – while in the 1859 Post Office directory for the area around Tower Hill, there is at Number 15, Little Tower Hill, a Mrs Cathryn Dutfield, ‘licensed carman’, and her husband Henry Dutfield, merely ‘carman’ – which looks very much as though it was Cathryn, not Henry, who held the licence from the Worshipful Company of Carmen for her husband’s work as carter and carrier within the City of London. I will finish, from the same directory, with Mrs Phoebe Dwelley of 10, Well Street, Wellclose Square, who is listed as ‘wheelwright’.

If nothing else, this tells me that our popular picture of Victorian womanhood is very much skewed, on the one hand to the upper middle classes and on the other hand to the very poor. Perhaps there was little or nothing for a gentleman’s daughter to do, other than marry or teach – and certainly there were many starving seamstresses, flower sellers and full or part-time prostitutes: but it looks as though plenty of their lower middle class/upper working class sisters managed to be both busy, competent and comfortable in a wide variety of trades, thank you very much indeed…

Visit Katherine's website
or her blog, Seven Miles of Steel Thistles
Posted by Katherine Langrish at 07:30

Fascinating post! And how I love that final photograph...

Oh, wow! I love maps and that sort would be absolutely fascinating!

I bought some of these maps years ago from the OS direct, I just assumed you could still get them from there - absolutely invaluable, since I couldn't get Kelly's Directories at the time. The detail was, for someone wanting to do painstaking research, just fabulous.
Even longer ago I worked at a museum in Southampton as an archive cataloguer, and things like reciepts are an eye opener - if sometimes incredibly boring to catalogue.
LSE have also now digitised Charles Booths poverty map of London.

This is brilliant, Katherine - and a classic illustration of how much more we can learn from maps than simply geography.

For those who can't get to the Guildhall Library I've found a good selection of similar maps here: http://www.alangodfreymaps.co.uk/london.htm
Most are from 1894 like your Greenwich one, but some date back to the 1860s.

The terrible thing is that I want them all...

A lovely counter to the married/poor relation/servant/prostitute/ version we usually get of Victorian women.

This is wonderful. I had no idea such resources existed. Brilliant stuff. And most interesting about the work these women did.

Very interesting! I love ordnance survey maps. I just wish they went farther than they do!

These maps sound wonderful, especially when accompanied by backed by such a range of information.

Really enjoyed hearing about all the working women - and the useful links to more map resources. Thanks.

This is fascinating - I had no idea all this information was available. Brilliant for writers and also family historians. I too had an exciting find at the Guildhall Library - though mine was much more expensive at about £20 for a h/b book. But it turned out to be worth every penny. It's "The A to Z of Elizabeth London" and has spreads from several old maps with streets and many buildings NAMED in red, making it very easy to move around as if you were really there; and the scale makes it easy to see how, for example, an alley might connect two streets. You can get these books covering later periods as well. I've also got a pack of four maps covering London in 1863 with lots of detail, from Old House Books.

Thankyou for all the comments! It is possible to order maps via the Ordnance Survey themselves, but much more expensive - I tried Blackwells in Oxford, and would have had to fork out about £50 for the areas I wanted to look at - and not on the same scale either! So the large scale. modestly priced Guildhall Library maps were a real find. It's also an amazing library, of course.

Just to inform you that unfortunately the Guildhall Library Bookshop closed in June 2011. The Library is still here of course, and we do still sell a few publications but alas not the OS maps.

Oh no! That's tragic! What happened to the stock?

This is horrible news about the Guildhall Library!

Guildhall Library is still open 9.30-5.00 Monday-Saturday for access to our printed book collection and some archive collections.

Before the bookshop closed in 2011 much surviving stock was sold in a 'closing down sale'. However, Guildhall Library does sell a limited number of publications within the library. At the moment we do not sell maps, but we hope to stock a limited number of the Godfrey Old Ordnance Survey Maps for sale in the future.

I think this wonderful post really underlines the way in which myths about the Victorians have been made for us - and ideas about 'a woman's place' are just way off beam. Like the fact that Saxon monarchs were elected, I think this kind of knowledge is an excellent counterargument to those who view women NOT working as somehow part of 'the natural order of things.'

Such delightful information ... perfect tidbits for a book I am writing :)