"A GOOD THING THE MORE COMMON IT IS, THE BETTER IT IS" by Jane Borodale

I like to think that, amongst the flora growing down on the damp fields towards the river Cary and tucked away in the oldest hedges, there just might be weeds at Lytes Cary Manor that are descended from weeds that grew there at the time of botanist Henry Lyte.

A modest medieval house on the edge of the Somerset Levels owned now by the National Trust, it is not hard to picture Henry Lyte (c1529-1607) there working on his groundbreaking Herbal in his small, dark study, walking the estate for fresh air and studying the plants around him. His respect for the power and virtues of ordinary, everyday wayside plants is the inspiration for my novel THE KNOT, which pieces together known fragments of his life. 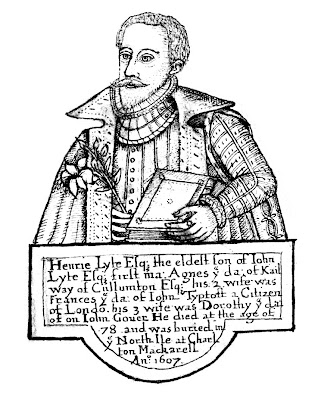 Largely forgotten now, his translation of Flemish naturalist Rembert Dodeons’s Cruydeboeck became the standard work on herbs in the English language during the latter part of the 16th century, and was hugely influential. Lyte called his translation The New Herball or Historie of Plants, and it was published in 1578. In folio, including almost 900 illustrative woodcuts by Leonhart Fuchs, it was the first comprehensive work to list every known plant in English.

With the sole exception of William Turner’s work (the radical Dean of Wells cathedral) who, living nearby and planting his own physic garden, must surely have provided encouragement and instruction, previous Herbals available at that time were in Latin or other European languages, never in English. Descended mostly from classical texts (Dioscorides, Pliny) they were inaccessible to the ordinary man or woman without an elite education. New herbals were becoming the cutting-edge medical manuals of their day, combining received wisdom of the ancients with a new emphasis on observation and study of the natural world. Communities engaged in this new scientific study came from a variety of backgrounds; apothecaries, scholars, aristocrats, explorers and merchants. Turner had produced an original work in English, but it was far from being a comprehensive study. Until Henry Lyte published his massive undertaking, no-one had compiled a list of all known plants in English. This itself must have required an in-depth understanding of botany, so that the finished work is far more than a straightforward word-for-word translation. 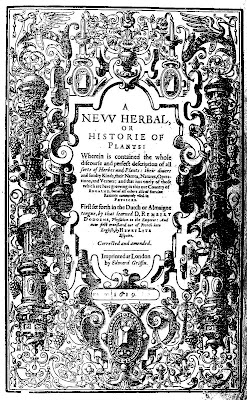 There’s no doubt in my mind that Henry intended his translation to be a step towards a more equal distribution of knowledge. It was a time when to translate into the vernacular tongue for the common man to understand was a political act – the Bible itself had only been translated into English within his lifetime. In the preface to the Herball, he states; Bonum, quo communius, eo melius & praestantius, translates this for us as, ‘a good thing the more common it is, the better it is.’ There is irony in the fact that Henry Lyte is so forgotten now, so ignored by posterity. His introduction to the Herball outlines, manifesto-style, how passionately he believed in open sharing of this medical expertise:

'My translation shall make this good and profitable Historie (which hitherto hath lien hid from many of my Countrymen, under the vaile of an unknowne language) familiar and knowne unto them.'

No doubt predicting the inevitable disapproval of the College of Physicians he adds rather pointedly that:

'The good and vertuous Physition, whose purpose is rather the health of many, than the wealth of himselfe, will not (I hope) mislike this my enterprise, which to this purpose specially tendeth, that even the meanest (poorest) of my Countrymen, (whose skill is not so profound, that they can fetch this knowledge out of strange tongues, not their abilitie so wealthy, as to entertain a learned Physition) may yet in time of their necessitie have some helps in their owne, or their neighbors fields and gardens at home.' 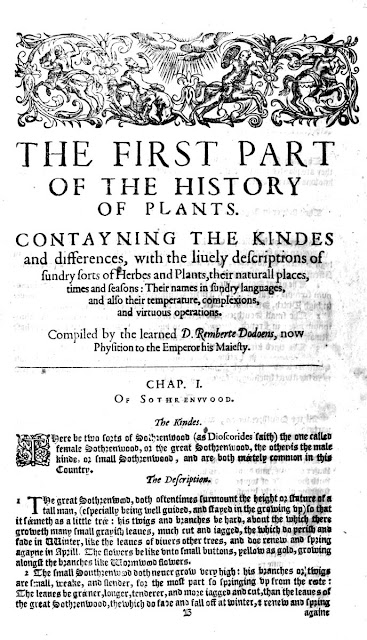 I love his idea that the key to health might be readily available in anyone’s garden plots, on waysides, to anyone who could read in his (or her) mother tongue – and that this text enabled lay men and women to practice medicine, as well as providing clear description of the botanical features of the plants. It would have been invaluable for those unlicensed women practising as herbwives, and gentlewomen running their own stillroom at home to tend to ailments as they occurred both in the household and amongst the poor in the community who couldn’t afford the expense of a doctor.

Henry’s own personal copy of the French version of Dodeons, translated by Charles Lecluse, is in the British Library. Covered in notes in his tiny, immaculate hand, it feels like the closest we can get to hearing Henry speak for himself. His voice is in these notes – observations of local Somerset plants and plants seen in other men’s gardens, cross-references with points of interest gathered from other herbalists – Mattioli, Turner. There are smudges, doodles, marginalia. At the back are assorted notes about the estate, a recipe for horse medicine.

Other clues about his life at Lytes Cary exist. The garden bears no trace now of the layout of his own magnificent garden, but we know from John Aubrey’s 17th century writing that it contained ‘a good collection of plants for that age, some few whereof are yet alive’, and we know that ten years after Henry’s death there were ‘divers sorts of fruite growing at Lytescary’: 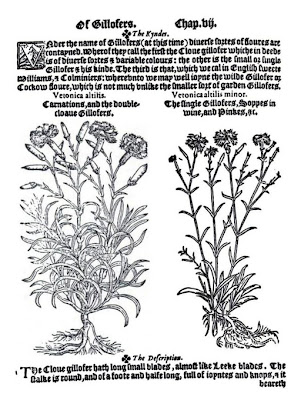 Most of his significant correspondence is lost. We know that there were letters from gentlemen and men of letters relating to the herbal, because his son Thomas mentions them in his commonplace book – only that they existed, not their content. But this commonplace book gives us instead extensive, tantalising glimpses into Lyte family life on the estate at Lytes Cary: the matters of tenancies and rents, taxes and payments of queensilver, personal disputes, trees cut down, acrimonious family lawsuits, ditch digging, hedge planting, land issues, windmills, hopyards and field names (Fatt Moor, Outdrove, the Gore, Swan’s Nest, Dame Christian’s Cross, Clay Furlong, the Ridgway). Thomas also mentions the existence of ‘physick notes, good against the new sweat and other good old remedies’ and then like gold dust for the novelist; ‘my father’s letters written in great anguishe of mynd’ and, ‘unkynd letters and worse dealings betwixt John Lyte (Henry’s father) and his son and heir.’ Looking at these and other documents and references I began to assemble together intriguing snippets, and realised there must surely be a novel in there. When I got to, ‘there went about a most vile report of the sicknes and death of the first wife of Henry Lyte, and likewise of himselfe, by the report of his owne father,’ I was convinced of it, that there was a premise. 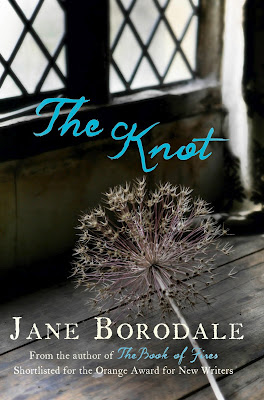 Now that I’m done with writing THE KNOT I really miss Henry Lyte’s company, but definitely like to think there’s still something of his spirit up there amongst the weeds on the hill at Lytes Cary. Visit him if you’re passing…

Likewise if anyone happens to be passing Waterstones in Wells, Somerset tomorrow (Sat 23) I’ll be signing copies of THE KNOT between 11am-2pm – drop in and say hello, it would be lovely to see you.

Love the sound of this book!

Agree with Cornflower! Such a lovely post about how you found your story - and somewhat sad too, with all the trouble Henry seems to have had for helping the ordinary man & woman.

44 sorts of plums - and that didn't include bullace? Where has that cornucopia of varieties gone, I wonder? And what were Cornish berries?

Lovely post. Do you know whether there is a facsimilie edition of the original available?

A fascinating post, Jane.
I've been to Lytes Cary sometime ago. Now I want to go again. And I shall look forward to reading your book!

Thanks Cornflower (great avatar!) and Penny for your nice comments.

Mefinx - the Cornish berry was a bit of a mystery, at the time I asked the Royal Cornwall Museum and they thought it might be a mazzard, which is apparently a small black type of cherry that grows in the Tamar valley and was popular in the past. I felt it was probably a Cornelian cherry or cornel, which does have berries that are edible, and Turner mentions having seen one, and so does John Gerard - they were fairly uncommon though I think. There is no facsimile in print, regrettably, wouldn't it be a lovely thing! William Turner's herbal however has been recently reprinted by CUP as a 2 vol. set but it's quite expensive.

Mark - thanks and yes I'd definitely recommend another visit to Lytes Cary...

Bother - if I'd read this post earlier, I could have dropped into Wells to meet you - I'm in Cheddar, so very close. Never mind - another time, perhaps! The book sounds great.

It would have been nice to meet you, Sue. Maybe our paths will cross next time we're both in Wells...

Just seen this book mentioned on Cornflower's Book blog and knew it had my name on it! Ordered it right away!
Margaret P