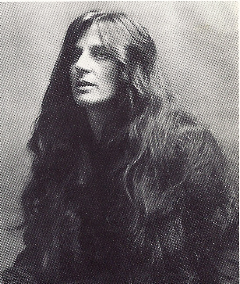 This is the second extract from Louisa Young's A Task of Great Happiness: the Life of Kathleen Scott

[Kathleen] weighed eleven pounds when she was born, and her hands were nearly as big at birth as those of her two-year-old sister Jane. Jane, known as Podge, and the littlest brother, Wilfrid, were taken in to see the new baby: Wilfrid stared at her, slapped her face and ran away. Podge remembered Kathleen as a baby 'scrambling over poor unfortunate mother'. Not surprisingly, Janie was ill again. She wrote to her sister Zoe, telling her everything the doctor had said: 'I am using my spectacles . . . they do not help me as yet as much as I had hoped . . . failure of sight . .. disease of the kidneys . . . paralysis of the optic nerve . . . my heart etc. is weak. . . I might have burst a little vessel in the brain.' She finished up admitting that 'I have given you a horrible history of my proceedings.' But the proceedings were horrible. She went to the seaside for a couple of days to rest, and wrote again to her sister, in pencil: 'I have been very badly since Thursday, two days in bed and two days creeping around wrapped in a shawl . . .' She had slept in a damp bed, but didn't want to make a fuss and get the servants into trouble. On 1 October 1880 she died of pneumonia, aggravated by what was known then as Bright's Disease—inflammation of the kidneys. She was forty-two, and her youngest daughter was one.

Kathleen, in 1932, recalled her mother thus: 'This long-suffering lady went blind when I was born, and for the brief time that she lived afterwards she lay gently feeling her last lusty baby's face, tracing the small features. Even a dozen had not taken completely from her the sense of the miraculous. How would it have been had she been able to hear, twenty, thirty, forty years later, this same me stretching out my arms to love, or the sun, with a "Thank God my mother had eleven children; just suppose she'd stopped short at ten!"'

The day Janie died Aunt Zoe Thompson took Kathleen, Podge and Wilfrid into the spare bedroom and told them, crying, that their mother was dead. Podge claimed it meant 'nothing, absolutely nothing'. She was speaking for herself. Some years later she and Kathleen saw the corpse of a man who had fallen from scaffolding. Kathleen was haunted by the sight of his boots sticking out from under the blanket on the stretcher, they filled her 'with every form of creepiness'.

The Bruces were very much a Victorian family: huge, resilient, religious, stiff-upper-lipped, and with a streak of eccentricity. They were brought up on Robinson's Patent Barley and Groats, with nursery maids, schoolrooms and white pinafores. Lloyd Bruce was by this time a canon of York and used to pay his little daughters a halfpenny a time to collect wheelbarrows of weeds, and tell them not to spend their earnings all at once. Though he had adored Janie and was grief stricken at her death, nine months to the day later he married a well-to-do widow from Sheffield named Mrs. Parker, who he hoped and believed would help with the children. She had a bonnet with both roses and feathers on it, and the elder children were not at all sure about her, even though she had been a friend of their mother. Douglas, the eldest boy, suggested that they call her mother in gratitude for her coming to look after them, but Rosslyn, the seventh child, said he would only ever call her Mrs. Parker. The only benefit he saw was the fact that Mrs. Parker's sister was married to Sir Luke Mappin, who had built the bear and goat terraces at London Zoo. Even that didn't help much. Rosslyn had a performing flea, and when Lady Mappin came to stay there was uproar because it was discovered on her ladyship's pillow. 'Sorry,' said Rosslyn, 'that's not mine. Mine is a cock flea. That's one of her own.'

Podge recalls nothing between her mother's funeral and being instructed to put on a clean pinafore to go and meet her 'new Mamma'. The Canon married for the children's sake, and Mrs. Parker herself was not entirely happy with the situation. Although eventually all the children came to call her Mamma, she felt that she was 'only Mrs. Bruce'. She did try to enter into the spirit, but even Elma, the eldest sister and the 'sensible one', said that whereas her mother had been 'all gentleness and humility, this one was all pomposity and boss'. Mamma took a great fancy to the toddler Kathleen, and used to read picture books with her after lunch. A favourite was called Wee Babies; Kathleen specially liked the part about the twins Horace and Maurice, who were so alike their nurse couldn't tell them apart—this is the first appearance of a life-long inclination towards males, babies, and in particular male babies. But Mamma did not work out. On one occasion she slapped her husband's face during a dispute about the fish for dinner; after that she took to spending long spells abroad. No one else took much notice of Kathleen.

Podge's first memory of Kathleen was of her in 'a white woolly pelisse and cape, the latter ornamental round the edge with little woolly blobs which you invariably sucked and pulled off. I remember Rachel the nursemaid's grief to find another blobble gone, as usual'. Rachel was popular, and Mamma's sacking her (because she was rather vulgar and could not sew) did not endear her to her new family. The new nurse was called Emma; she had been Janie's maid and Kathleen used to get into her bed every morning and learn German words and prayers. Podge would amuse herself at night by making ogre faces at her baby sister over the edge of her cot to make her cry, until the nursemaids in the room below banged on the ceiling with a broom handle to make them stop. Podge never knew where the banging was coming from, but she knew what it meant.

The Canon was not well, Mamma was largely absent, and Elma was taking over as the organizer of the brood — their great uncle Sir Hervey Bruce even referred to her by mistake as 'your Aunt Elma' rather than 'your sister'. Several of the children, including Podge, were dispatched to Edinburgh to stay with their great uncle William Skene, Janie's uncle, the brother of James and Fifi Skene, to lighten the load. He was perfectly accustomed to this: for the past fifty years his house in Inverleith Row had rarely been without nephews and nieces and great nephews and great nieces staying. In between being Historiographer Royal for Scotland, a writer and scholar of Celtic and Gaelic history and a family lawyer, he liked to take them swimming (even in his old age) and tell them tales of Highland history.

Kathleen said later that Mamma 'appeared to take little or no interest, either during her life or at her death, in the healthy, good-looking, good-humoured army of her step-children', but this may not be quite fair. Mamma offered to take Kathleen as her own child when the others were going off to Edinburgh, and the fact that this offer was rejected may have had some bearing on her deathbed reluctance to leave her worldly goods to the family with whom things had not worked out very well. Kathleen stayed on a year with her father and big sister Irene, who 'took you for her doll', as Podge put it, dressing her up and calling her Baby. Podge, in Edinburgh, missed her little sister, regretted the ogre faces and cried herself to sleep at night resolving to protect Kathleen in future. When, at the age of seven, Kathleen joined her siblings at Great Uncle William's, the protection was needed. On one occasion, Podge reported later, 'we were all jumping from trucks filled with sand (to be used for the erection of the Forth Bridge) on to the sandbanks. You were a timid child and flunked jumping from the same height as they did who were several years older. One of them got behind you and pushed you down—your mouth, eyes and nose were covered with sand. I boil now when I think of it.'

This is lovely, Louisa. Families are endlessly fascinating. And parts of this are so sad...wonderful!

So evocative; I enjoyed this very much. Other people's families are so much more interesting than one's own.