In Search Of Michael: by Sue Purkiss

Tonight, while a few people might be watching Sweden v England on the television, I'll be watching a history programme: Michael Wood's The Great British Story: a People's History. Well, I'm a History Girl - you'd expect nothing less. It's exactly what the title says it is:  a history of Britain from the point of view not of the kings and nobles and upper classes, but of the ordinary people. There's one particular technique it uses that I think works very well: it has the ordinary people of today reading the testimony of the ordinary people of long ago. It's a simple but brilliant way of breathing life into the words of dusty ancient documents. If you've read other posts of mine, you'll know that I'm always banging on about history being about ordinary people as well as the well-known movers and shakers, so you'll understand why this appeals to me. 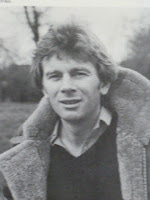 Michael and I go back a long way. In 1981 - over thirty years ago: can it really be true? - he made a documentary called In Search of the Dark Ages. In nine programmes, Michael leapt about all over Britain in a very fetching sheepskin jacket, exuding enthusiasm about such luminaries as the Sutton Hoo Man, Alfred the Great, Athelstan and Eric Bloodaxe. I did Anglo-Saxon as part of my English degree, and I've always felt drawn in some way to the Scandinavian strands of our heritage. (Still am: The Killing, anyone? Or The Bridge?) So perhaps I was an easy target. 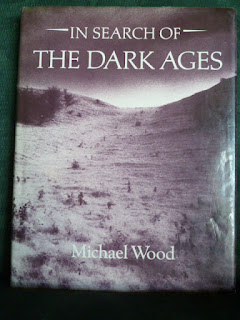 But I think there was something new and innovative about those documentaries and the way they presented history. Suddenly, figures from the dim and distant past were brought to new and vivid life: Michael's enthusiasm was infectious. The way they were photographed added to the air of Scandinavian moodiness and grimness: you can see that on the cover of the hardback of the series. I think this particular shot is of the ridge above Ethandun (now Eddington) where Guthrum the Viking leader woke up one morning to see Alfred and all his forces ranged up on the skyline, about to descend like an eagle onto its prey. Years later, when I wrote a book about Alfred, Warrior King, I went to see this ridge; it's still just as atmospheric. I wonder if the seed for the book was sown when I watched that programme? I didn't think so at the time, I thought it had other roots; but looking back, I'm not so sure.

Since then, of course, there have been masses of popular history programmes on television - David Starkey, Simon Schama, Mary Beard, Helen Castor and many more. But I think perhaps that In Search of the Dark Ages was the mould-maker, with its charismatic presenter using every means at his disposal to convey his enthusiasm for his subject, with its delight in showing us the context and the settings and the artefacts which help to bring history to life. Isn't that what they all do now, to a greater or lesser degree?

And Michael kept on making programmes. I remember my sons cheering when he went in search of Alexander the Great, plunging into the sea fully clothed, climbing mountains, eating lamb cooked on a spit over the fire and then turning to the camera, his eyes shining, to share his excitement: 'Here I am, doing just what Alexander might have done, in the place where he might have done it!!'


And now he's taking a fresh approach again, involving people in finding out their own local history, and showing us along the way what life was like for most people in centuries past. The old sheepskin jacket - or a worthy successor - is still occasionally in evidence, often accessorised now with a floaty turquoise scarf. I think he's great. He's certainly far more inspirational than any of my history teachers ever were, bless them!
Posted by Sue Purkiss at 06:00

I just wrote a comment about how I'd watched that series and then realised that, no, it was his 'In Search of the Trojan War' that I saw as a 14-15 year-old and loved. That was fantastic too! Michael Wood was a hero in our house. What a great reminder, Sue, & a lovely tribute. I will definitely search out his new series now - it sounds excellent.

Thanks Sue, a great post. There are two things I have always liked about Michael Wood: his enthusiasm, which is the pure and simple enthusiasm of a child; and the gracious way he treats the people he meets.

I missed all Wood's series for some reason, but I love his legacy: historians wandering around ancient sites enthusing about the past.

I guess the American equivalent of Michael Woods is Ken Burns, who did the magnificent American Civil War documentary that my husband and I are re-watching for the fourth time.

Burns' style of having actors read primary sources over original photos is also brilliant. He has since applied this technique to Jazz, the American West and the History of Prohibition.

The British modus operandi seems to be simpler and more didactic, like a teacher taking you on a field trip, but because of the enthusiasm of Wood, Beard, Castor and the wonderful Lucy Worsley this works too!

Long live TV historians on both sides of the pond!

Hi Sue - I was there with you on the aofa too (in spirit!) glued to Wood's 'Dark Ages'. I was already an enthusiast for the period, having been fascinated by the Vikings and the Arthur Myth since childhood: and I loved the programmes. And I have that book!
But it's the jeans I remember, rather than the sheepskin jacket...

A slight sideways step, but we've been rewatching Bronowski's Ascent of Man - definitely not a patch on Michael Wood in terms of eye candy, but the passion's there too and draws you in.

Wow! Great post, Sue - and thanks for the memories! I watched 'In Search of the Dark Ages' while finishing my own Anglo-Saxon-including degree, and I think I learned more about the Old English world from him than I ever did my tutors. Wonderfully inspiring, atmospheric stuff.

Oh, and that leather jacket...

Sue Price - I was a fan of the jeans too, but thought it might be a step too far to drool over those! And I have to say, i do like the way he combines turquoise and blue and pink and violet in his shirts and scarves - noticed it again last night. A true inspiration!

I discovered Michael Wood with the Trojan War series, which I bought on DVD to replace my old taped-off-TV video. He is wonderful, isn't he? But I am also a Simon Schama fan - I've got his History of Britain on DVD - and I thoroughly enjoy Time Team. Tony Robinson has done some fascinating history shows apart from Time Team.

I agree. I have the Simon Schama book, and got some very interesting insights from him about Alfred. Also, the Time Team did a dig at Athelney which came up with some wonderful bits of evidence!

I am also a huge fan! Just recently wrote a post about my love of his "In Search of the Trojan War".

He is truly a passionate historian and inspiring presenter!

I have seen many of his series, but I have not yet seen In Search of the Dark Ages. Will need to get my hands on a copy! Do you know if this is available to buy?