Over the past month, two map-related stories caught my attention, partly because they had the words lost and mystery in their headlines. I'm fascinated by human settlements described as ghost or abandoned and have a huge fondness for maps, especially illustrated ones.

As a young schoolgirl growing up in New England, I spent a lot of time drawing and colouring in maps of historical colonial territories. My classmates and I made endless maps of the ever-changing borders, choosing colours for French, Spanish, Dutch and English possessions. We mapped many wars and explorers, battlegrounds and Native American tribes. But colourful as many of these people and events were, none captured me as much as the story of the lost sixteenth-century colony of Roanoke Island.

In 1587 Sir Walter Raleigh, who had been granted a charter from Queen Elizabeth I to establish a permanent North American colony, dispatched a group of settlers (the first to include wives and children) to Chesapeake Bay. Its newly appointed governor was John White, a gentleman artist and mapmaker who created unique visual records of the Native American societies he had encountered on a 1585 expedition organised by Raleigh. White gathered over one hundred colonists, including his own daughter and son-in-law, to make the journey and build a new settlement.

During a stop at Roanoke Island, the ship's pilot refused to take the settlers any further and they were forced to create their colony in the ruins of the English fort abandoned there after the 1585 expedition. The small detachment of men who had been left behind to defend the English claim were gone, reportedly killed by hostile warriors. When White retaliated, killing and injuring previously friendly native people, the English colonists further alienated local tribes.

As winter approached, White was forced to return to England and secure provisions for the colonists because supply ships had no idea they were at Roanoke rather than at Chesapeake Bay. For several years he was thwarted in his attempts to return to the colony and his family. His journey to England was plagued by bad weather and accidents. He was then unable to sail back as the Spanish Armada threatened invasion. In 1588, White set off at last but his ships were plundered by pirates and he was forced back to England. When he finally returned to Roanoke in 1590, there was no sign of the colonists. The buildings were in ruins. 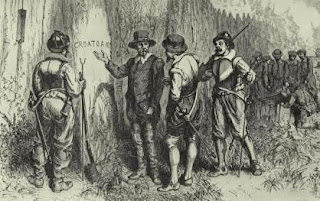 The only possible message was a mysterious word carved on a tree: CROATOAN. White investigated Croatoan Island fifty kilometres away but found no sign of the settlers there. His three-year-old grand-daughter, Virginia Dare, the first English child born on American soil, was among the missing. The strange carving and vanished settlers have haunted me ever since my schooldays. Imagine my excitement when the New York Times reported in May that the British Museum had found hidden markings on a watercolour map made by John White. Patched areas on the map were imaged using state of the art technology and revealed marks indicating a nearby fort. The full article with a link to the British Museum's findings, including wonderful close-up images of the map, can be seen here.

And what of John White? He was forced to abandon his search for the colonists and returned to England in autumn 1590. The meaning of the hidden markings on his map died with him. There is ongoing speculation that the remaining colonists settled among local tribes after reports of light-haired, blue-eyed tribe members. But Roanoke will always be the lost colony symbolised by a vanished little girl, a strange inscription and now, a puzzling map.

Unlike the Roanoke colony, which did once exist, the phantom Lancashire town of Argleton did not. And yet it appeared on Google maps and online directories until the end of 2010. I only learned about Argleton last week via Twitter, which is a resource for strange and wonderful things. The tweet led me to this article. Of course, I could not leave it there and followed the Argleton trail round the internet, discovering that people had set up a now defunct website for "Argleton Village" and, as the Guardian reported in 2009, a "save Argleton" campaign on the web. The "town" even inspired a novelette and this very entertaining journey with good photos. And if you want to see what it looked like on the map before it was "virtually bulldozed", here it is. I didn't quite believe that Google had completely obliterated the town, so I clicked on a link for Argleton and found myself looking at a map of the Irish Sea.

When one enters the world of phantom towns, it's inevitable that one comes across trap streets. Clever cartographers insert fictitious places also known as paper streets to catch anyone who violates their copyright. My favourite paper town is Agloe, New York, an anagram made of the mapmakers' initials in the 1930's. The name was copied onto other companies' maps and eventually the very real Agloe General Store popped up in the phantom town's location.

Lost colonies and phantom towns are rich material for stories - and for more maps. I quite fancy making an illustrative map of Argleton showing the town's phantom cricket ground, taverns and Victorian follies, ancient church and overgrown graveyard. What would your historical Argleton map include?

Teresa Flavin is the author of The Blackhope Enigma and The Crimson Shard, (Templar Publishing in the UK and Candlewick Press in the USA) historical fantasy novels for age 9 and above. She is currently at work on the final novel in the trilogy.

What an utterly fascinating post, Teresa! I hope you're going to write about Roanoke one day? There has to be a wonderful story there.

I'd never heard of phantom Argleton, but now I've had to trawl the net for it, and it's incredible the amount of imaginative material people have come up with. I love the idea of an illustrated map, but you have to include a village green - and a pond with ducks.

Great suggestions! I will add them to my proposed illustrated map of Argleton. Thanks. :)

I love maps and love this post. It's all quite fascinating and I didn't know about the TRAP STREETS. Amazing. What would I have in Argleton? A manor house...see my post below Theresa's!

A copy of your 2012 illustrated map housed somewhere on Paper Street.

Maps are fuel for the imagination. As another map geek, I just wanted to say that I thoroughly loved this post and your recounting of the history of the Lost Colony of Roanoke from John White's perspective.

Thank you, all! I will definitely use these recommendations for my imaginary map of Argleton.

Fascinating! You and Kath Langrish have inspired me to blog about maps, too. I especially love the idea of trap streets. I know one historical author who puts trap facts in her books. Plausible sounding facts to catch out those who might steal from her!

Such a sad story. Only hope the little granddaughter really was adopted by the tribe.