History lies in the soil by Leslie Wilson

My house and garden sit on a minor Civil War battlefield - it was a skirmish, really, but it went on all day and by evening the field, according to locals, ran red with blood. Presumably some of the chemical components of that blood are still present in the soil, helping my plants and vegetables to grow. 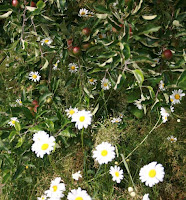 When I dig, I find bits of old blue and white china, but also I once turned up a rusting but recognisable end of an old ploughshare, and when the greenhouse was put up, Stewart the Handyman, who levelled the ground, found an old clay pipe, which now lives in our sitting room. But soil itself is the product of a continued interaction between humans and the earth, and is as much part of our history as battles and politics. Indeed, bad harvests have, in the past, been a potent cause of warfare and the toppling of governments, and we need only consider the catastrophe of the American dustbowl to realise the social importance of soil. 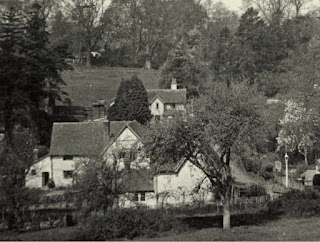 There used to be an old cottage in what is now my front garden, before the current house was built. But the picture doesn't show it as having much garden behind: I think most of the cultivated soil was where the road now is - such a waste. Behind was pastureland, and the soil, when I came here, was largely just a thin layer on top of alternate chalk, clay, and gravel - a typical Chilterns geology, I have been told. 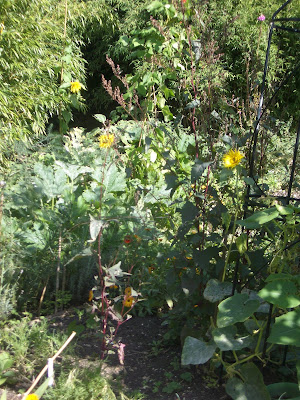 The lost soil at the front would have been manured, cultivated, and carefully looked after for years and years and years. Anyone who is lucky enough to garden old soil knows what a benefit that is. I imagine agricultural labourers, like the ones in Flora Thompson's 'Lark Rise to Candleford,' hoeing away in the evenings, and maybe cursing the 'hemmed twitch', the couch grass that still annoys me in the front garden.

I'm told that adding chemical fertilisers to soil actually kills soil organisms. Soil that hasn't been interfered with is a reserve of precious living creatures - from earthworms to microscopic animalcules - who, like our gut flora, have a lot more to say to our survival than we humans like to think. They take what we put in and spread it among the inert mineral components, making the wonder that we call earth.

Here's my grandson, the inheritor of our earth and soil, enjoying it and the potatoes he's picking out of it.


I feed the soil organisms compost, including peelings of oranges from Spain, peach stones from Italy, and bits of more exotic vegetables, thus depositing into the soil the evidence of our own multi-national trading. Newspaper, supermarket vegetables and my own vegetable peelings and outer leaves join grass clippings and such weeds as can be trusted to rot down and not use the compost for proliferation, as the couch and bindweed do. But a more ancient process of assimilation and conversion happens in parallel, as small animals die, and birds and mammals deposit their droppings.

As Eliot puts it, in the four quartets, much better than I can, too: 'flesh, fur and faeces/ Bone of man and beast, cornstalk and leaf.' (TS Eliot: Four Quartets).
Posted by Leslie Wilson at 01:00

How I envy you your historic soil! My garden is a few pots on my balcony, my soil potting mix. But I still love my plants. I actually managed to grow a few strawberries for a while. Beautiful post, Leslie!

My soil is like the Somme, churned mud writhing with chickens and pigs. No chance of growing anything. I suppose if the pig died that would be a big injection of organic matter. But I don't think it's legal to leave a pig in situ to compost down.

Lovely post, Leslie - and 'down to earth' in every sense. Impossible not to think of 'Hamlet' and the argument that even Alexander the Great turns to dust, dust to earth, and earth to loam. Rupert Brooke too, of course, and it sounds as if your garden is indeed 'Forever England'.

Mine, I'm afraid, is merely 'forever buiding site', since it was the last house built in our road and was clearly erected on a pile of rubble...

A fascinating post. Our garden used to be allotments and small-holdings and I'm forever turning up animal bones as well as odd pieces of rusted metal.

We also have a large compost heap and the process of assimilation as my egg shells and vegetable and fruit waste slowly mulches down and dug into flower borders never ceases to fascinate me. It's rather like writing fiction. So much goes into the process and the richer the variety of what goes in, the richer the outcome.

Or that's the theory anyway.

How interesting that there was a battlefield where your garden is now! Lovely post, Leslie.

Wonderful post, Leslie - makes me feel I really must go and get my hands grubby in the garden (though this is rare for me, I'm sorry to admit!). I too am fascinated by the battlefield aspect... And I do like Sally's comparison of compost & writing!

Lovely post - am now imagining ghostly horses and clashing weapons outside your house on stormy nights.

Having a garden infested with the dreaded mare's tail - a deep-rooted, silica-coated plant that is a survivor from prehistoric times - I often feel my garden has too much of the wrong kind of history!

Fascinating and kind of gruesome to think of that nourishment's source in your garden Leslie. I've been really interested in soil recently and how we know so little about it, or how to work with it and what plants/ methods of tilling inadvertently destroy those friendly micro-organisms you mention. Maybe in 50 years time we might have a better handle on it, hopefully sooner...

Penny as a fellow horsetail sufferer you have my sympathies.

I used to have horsetails in a previous garden, so sympathy. Bindweed, couch and butterbur are my current betes noirs