Travelling with a baby in 1645 by Ann Turnbull

It's a pleasure to welcome to the blog today Ann Turnbull, whose third book in the Quaker Trilogy is out this month. Seeking Eden is published by Walker Books. Will and Susannah, who first appeared in No Shame, No Fear and returned in Forged in the Fire, here travel to Pennsylvania with their children. This is the story of their oldest child, Josiah and his struggles with love, religious intolerance and the question of slavery. 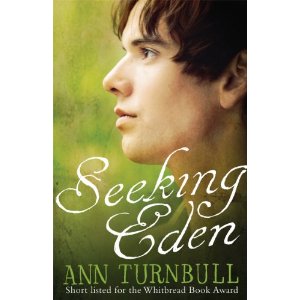 In the midst of writing these novels, Ann also wrote one called Alice in Love and War, for which she found out a lot of practical detail about what a woman in the seventeenth century might have had to deal with when travelling with a baby:


It’s 1645. There’s a war on. And a young woman is on the road, travelling with a four-week-old baby who is not her own child. How is she going to keep the baby alive? What did people do in the days before infant formula? This was one of the questions I had to research for my Civil War novel, Alice in Love & War.

Wet nurses were the obvious and best solution. The higher levels of society tended to use them as a matter of course, though by the 17th century there was much debate about the pros and cons, and Protestants often saw it as their religious duty to breastfeed.


When a wet nurse was sought, it was vital to find the right woman for the job. Jane Sharp, a 17th century midwife, gave a long list of recommended qualities, the most important of which was that the wet nurse should have given birth to a child of the same sex as the one to be nursed. The nurse should be of good character and pleasant temperament. A woman with a physical defect such as a squint or “black ill-favoured teeth” should be rejected, since any characteristic of the nurse would be passed to the child through the milk. A sanguine complexion was desirable – as were ‘handsome’ nipples!


After the birth, in order to encourage the milk to come in, the mother was advised to express the colostrum by hand and (alas!) to discard it. Sometimes a woman would suckle new-born puppies to bring in her milk. Meanwhile, her baby was probably being fed by a neighbour or someone else who was already breast-feeding. This would continue for a few days until the mother’s milk came in.
If there had been a difficult delivery both the exhausted mother and her child might be offered sweetened wine until breast-feeding could be established.

But what if the mother’s milk failed, or she died, and there was no wet-nurse to be found? Cow’s milk was considered unsuitable, though ass’s milk might be used. But often the answer was ‘pap’. This was made from barley bread or oatmeal steeped in water and then boiled in milk. It was sometimes used as a supplementary feed, but could also be given when there was no mother’s milk available. One wonders whether a newborn baby could thrive on it, but clearly it was widely used. Feeding a baby in this way was called ‘dry-nursing’ or ‘bringing up by hand’.

Feeding bottles - ‘pap boats’ - were often made of pewter with a screw-on top that doubled as a nipple.

Nappies would also have been a problem for a woman on the move with a young child. She would probably have put rags inside the swaddling bands and washed them when she could. It must have been a difficult and messy business, and the swaddling would have made it tempting not to unwrap the baby as often as necessary. In Alice in Love & War I describe sphagnum moss being used on occasion. It seems a likely option, though I have found no record of its use in Britain.


The practice of swaddling may have made travelling with a baby easier as the infant was completely immobilised. (I have a memory of seeing, somewhere, a picture of a firmly swaddled baby hanging from a hook on the wall while its mother does the housework. It appears quite contented.)
Swaddling was believed to help the limbs grow straight and true, and babies were swaddled for about nine months - though the amount of binding would be reduced as they grew more active, and there must have come a time when the baby began to make its own wishes known.

Much of the information about both wet and dry nursing was found for me by Dr Sara Read, who lectures at Loughborough University. Sara has recently published an article on the menopause
in Notes and Queries.

Alice in Love & War was published by Walker Books in 2009. 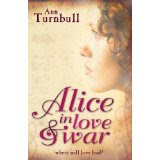 The very good news is that Ann Turnbull has joined the History Girls as one of our Reservists. You can read about her at the end of the About Us Page, is the section about our Reservists, who are on standby to fill in when one of our regulars has a crisis, so that your daily fix of a post on this blog is not interrupted.
Posted by Mary Hoffman at 01:01

This is really interesting, Ann! I remember seeing a swaddled baby attached to a coat hanger hung up in yurt in Mongolia. When Big Bint was born, my mother sent me swaddling instructions (a modern version, using a square sheet rather than bands), but I didn't hang her on a coat hanger.

Yes, I remember reading that Norse mothers would hang their babies on tthe wall, too. In an age with little household furniture, and when dogs and other animals, even pigs, might wander in and out, it may have been the safest place for them to be!

And I love 'Alice in Love and War'! I really look forward to reading 'Seeking Eden'!

This is brilliant! Especially fascinating to learn about "pap". I often think of the poor American settlers in wagon trains going across the Great Plains, Rocky Mountains, Death Valley, etc. But your description of wet nurses and swaddling is closer to my Roman interest. Thanks!

It's often puzzled me how mother's coped with babies at home in the days before waterproof fabrics - let alone out and travelling! I didn't realise the Tudors still swaddled their babies - I've seen very ornate baby walkers from that period so assumed babies were brought up much as modern babies.

Yet another post which makes me GLAD to be born when I was! But as regards swaddling, both our daughters were wrapped up tighter than Egyptian mummies when put into their cots. My ma-in-law's prescription and she taught me how to wrap them! No hooks though and no ill effects whatsoever, as far as I can tell. Our daughters, needless to say, did not swaddle at all but then I never told them that was the way to go! Lovely to have Ann as a Reservist. Sounds suitably Cromwellian and 17th century!

I remember that in "Great Expectations" Mrs Joe was always going on about how she'd "brought Pip up by hand" and now I understand what she meant. Thank you, Anne, for pointing that out. Clearly little Pip was a survivor!

The one aspect missing seems to be what form the baby carrier would have taken - maybe something along the lines of the Welsh shawl? Or a tied length of cloth similar to Mexican rebozo, have seen medieval image of cradleboard too - any ideas?

In my novel I describe a simple sling made from a length of cloth. I made that up, but there must always have been such slings. I've seen pictures of nomadic people using some sort of cradleboard, which I'd imagine would be more secure. In my childhood babies only went out in prams, but when I had my own babies, in the 70s, slings became fashionable. I remember sitting on a bus with my young son beside me and my daughter in a front sling. An elderly woman opposite glared at me and spent the entire trip loudly informing the other passengers what a bad, selfish mother I was to carry the baby around like that with her spine curled up and how much harm it was doing her.

I think I turned out OK, mum!