Of course, I don't believe in astrology. Our lives ruled by spinning balls of matter light years away? Utter nonsense, of course. But there is one Libran trait that I undeniably have in spades: the ability - no, the compulsion - to see both sides of everything. This means that choosing anything takes ages - a coat, for instance: " Shall I have the teal blue? Or would grey be better? And a flared one or a straight one? Or should I not get either of those, should I...?" It wastes so much time. So I'm experimenting at the moment with choosing according to the first thought that pops into my head.

So when I thought of doing a little round-up of museums-I-have-loved for this month's post, my first instinct was to make a spider chart of all the leading contenders, note down their plus points etc etc. But in the interests of my new policy of under rather than over-thinking, I decided instead just to see which ones floated, all by themselves, to the top of that murky cauldron that is my brain. And here they are. 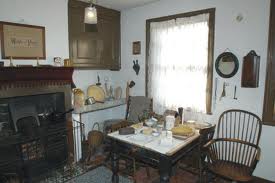 I think this was what actually started me thinking about museums the other day; somewhere or other I read that the hundredth anniversary of the publication of Sons and Lovers is coming up. I come from a town not far from Eastwood, where Lawrence was born and brought up. It's a mining town, not very pretty: not an easy place. My dad lived in a similar terraced house when he was a child, so I was very interested to go and see what it would have looked like inside. My father was one of six; how could they all have fitted intoi a two-bedroomed house?

Well, it didn't really answer that question - but it did show what the house would have been like. It was easy to imagine Mrs Morel, trying to keep up her standards with her bits and pieces of Nottingham lace and her framed pictures and the inevitable aspidistra. Easy also to imagine how Lawrence came to feel hemmed in and claustrophobic, so that he would eventually seek out the clear light and wider spaces of Cornwall, Italy and Mexico. If you want to understand Lawrence - and I suspect his time is about to come around again - then Eastwood is a good place to start.


Musee de la Resistance, near Brioude, in the Auvergne

(Sorry for the lack of accents - I don't know how to do them in Blogger.) This is a small, 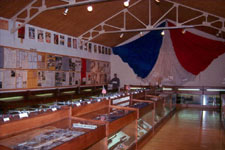 locally run museum which we visited some years ago while on holiday in the Auvergne. There are other more glamorous resistance museums, but there was something intensely visceral about this one. It was on the first floor, above a garage, maybe, or a shop. On the walls was a handwritten account of the war, and beneath are glass cases crammed with documents from the village - inert pieces of paper which were full of drama: a letter, for instance, from a woman who wrote to the authorities denouncing members of the resistance: after the war, she was shot. There were photographs of men who were captured and deported or shot, and letters - the last words their families had from them. That woman - perhaps her descendants still live in the village, alongside those of the men she sent to their deaths? And she wasn't the only collaborator. A disturbing museum to visit, but again, one that left you with a strong sense of connection to the time and place it commemorated.

This is very different: a recently refurbished museum in Taunton Castle, full of marvellous things, including this beautifully carved dead tree. Upstairs there is a turret room with quotes on the walls about Somerset done in exquisite calligraphy, and when I was there a while ago there was an audio visual display as you went up the stairs of the starling murmurations that you can see on the levels in winter. You get a real sense here of the sweep of history and of landscape.

This is one of my favourite places to go to in London. It's not actually a museum, of course, 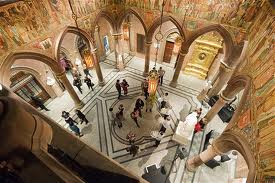 but it fulfills some of the functions of one: how else can you get so close to people of the past? Go to one room and you can immerse yourself in the court of Elizabeth 1: to another and there is Thomas More, hero of A Man For All Seasons, villain of Wolf Hall. Gaze at this representation of him with his family, painted by someone who stood in front of him and spoke to him, and see what you think of the man.

There's so much to see here, and always something different. There's also a fantastic range of postcards which are great for workshops about character.

And finally, the beautiful ship, now permanently moored in Bristol. This has been 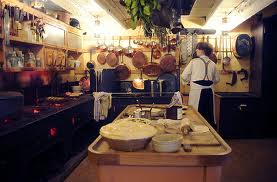 painstakingly and lovingly restored; when it first arrived it was just a rusty shell, but now as you walk through it you can see clearly the contrast between a first class cabin and what life was like in steerage. The picture shows the galley. An accompanying exhibition space has much more information, and also diaries and letters from passengers, and the chance to dress up as a Victorian. This is a joy of a museum to visit; children love it too, particularly, believe it or not, the cabin with the talking toilet.

It was after visiting the ship that I wrote my book for children, Emily's Surprising Voyage, about two children from very different backgrounds who meet on board ship as they set sail for Australia.

So what would you say is your favourite museum? (Or, well, one of them... No pressure!)
Posted by Sue Purkiss at 01:00

I don't have a favorite in England. I haven't seen enough of them! But I loved your post.

Thanks, Petrea - would love to hear about museums wherever you are!

So hard to choose, and I'm not even Libran! But how about the Ulster Museum in Belfast - new to me and really, really excellent.
Thanks for the post!

Looks amazing - another one to put on the visiting list!

The chicago historical society, feild museum, art institute and the shedd aquarium (the architecture of the original part is art deco luscious!) all in chicago. there are tons more but these are my favorites.

And another place to add! And Flora, I just had a look at your quilting blog. What amazing work you do! Really beautiful. And I just thought of another museum, not far from here in Bath - the American Museum. It has a permanent exhibition of American quilts - gorgeous.

So many to choose from! I love the Natural History Museum in Oxford and the Pitt Rivers museum next to it. Top of my want-to-visit list is the new Titanic museum in Belfast. I'm adding the others on your post and in the comments to the list, Sue, thanks.

Sue, you got me thinking. You all did. Momma Bear is right, the Chicago museums are superb, inside and out.
At Oxford I didn't have time for everything but I liked the Ashmolean. Wished they'd let me snoop around the Bodleian Library but I guess that's not what it's for!

I live in Pasadena, California. For a small town we're well-endowed with museums, including the Norton Simon, the Pasadena Museum of California Art and the Pacific Asia Museum. But my favorite is the Huntington Library and Gardens--a little bit of Europe here in California.

Then there's Los Angeles 8 miles away, and museums forever.

The Ashmolean is lovely. It was very elegantly refurbished a few years ago - have you seen it since then? It's lovely - but I do have a weakness for the way it used to be with everything just piled in together, so you never knew what you were going to find.

It's great to hear about museums in other countries - it opens things out somehow. And gives you more reasons to visit places.

I enjoyed visiting the "Dead Zoo", ie The Dublin Museum of Natural History. An old-fashioned collection of slightly less than immaculate stuffed animals, arranged in categories within glass cases,and the whole place swarming with interested children and their parents on a Sunday afternoon. Free entry too. Possibly not very "correct", but the collections were created over eighty years ago and beyond.

Penny, the "Dead Zoo" sounds a bit like Chicago's Natural History museum was when I was a child. Many years ago!

On my Mac, Sue, I go to File and then down at the bottom is Special Characters which gives you all the accents that you could possibly want!
My favourite museum is the Museum of London with great displays of the history of London since the beginning of time.