I was visiting an old house outside Machynlleth, in North Wales, when I noticed a pair of old shoes in the hearth. The guide said that they had been found while work was being done on the fire place. Explanations as to how they had got there, or why, were vague. They had been 'forgotten'; they were abandoned because they were 'worn out'; just 'left' for no apparent reason; they'd belonged to a child who had out grown them. The shoes were worn but not unwearable. Shoes were not lightly discarded. My grandfather had a last upon which he would repair the family's shoes. The heels on the shoes were uneven. One was more worn than the other and one was built up. They were small, but not a child's shoe. They probably belonged to a small woman with one leg shorter than the other, or perhaps a deformed foot. She would have walked with a distinctive gait, favouring one leg more than the other. Such shoes are rare survivals. They were worn until they fell apart. So, why were these here? I didn't believe for a minute that they had been left, forgotten or abandoned. They had been placed in the hearth deliberately. They were an example of an apotropaic object. Apotropaic meaning having or reputed to have the power of averting evil influence or ill luck (OED); from the Greek ἀποτρόπαιος averting evil (ἀποτρέπειν to turn away, avert). These kinds of objects are usually found in old houses, above or near doorways, chimneys, or in the roof space. Shoes are common. Perhaps they belonged to someone who spent a lot of time by the hearth, tending the fire, doing the cooking, looking after the house. Perhaps she could not move far, anyway, because of her lack of mobility. Perhaps the idea was that, in death, that person would continue to protect. Seeing something like this brings alive one of the least accessible areas of history, that of folk belief, magic and, in this case, the power of witchcraft. 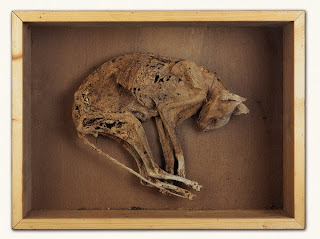 In the past, such belief was not just common, it was literally part of people's lives. Rather more macabre than a pair of old shoes, mummified cats were sometimes built into the fabric of buildings: above the hearth, in the chimney, between the walls. They didn't get there by accident. They were deliberately placed at entrance and exit points, or in the body of the house, put there to protect the occupants, to ward off evil, to keep the witches away. 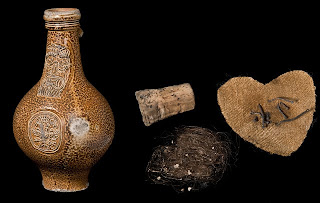 The witch bottle is another of the apotropaic objects sometimes found in old houses. The one seen here is a 16th or 17th century Bellarmine or Bartmann jug, so-called for the bearded face seen on the stoneware vessel. An example found in the bed of Westminster Abbey's millstream during excavations in 1904 was described its collector, Edward Prioleau Warren as:

“stoppered down with a cork; upon opening it, and washing out the contents, there was found within it…(i) a small piece of cloth or serge, formerly red, cut carefully and neatly into a heart shape, and stuck full of brass round-headed pins, each pin bent; and (ii) a small quantity of hair, ostensibly human, and small finger nail parings. I think there can be little doubt as to the nature of this deposit inside a corked jug…It is a malevolent charm, the intended victim of which was a woman, and it is perhaps permissible to surmise that the depositor and evil-wisher was of the same sex. Perhaps a maidservant who had a grudge against her mistress, and who could easily obtain the clippings and prunings of her toilet...”

His interpretation was one of malevolence, but it is just as likely to have been a counter-charm placed to ward off witchcraft. It is possible that the contents were collected from the witch him or herself, so that the bottle actually contained the witch, such as the one found in Penelope Lively's The Ghost of Thomas Kempe, or the bottle collected by Margaret Murray and now in the Pitt Rivers Museum, Oxford. 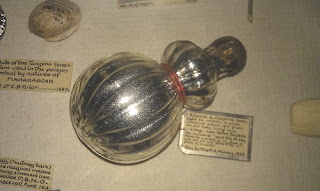 This bottle is described as a "Small glass flask of bilobed shape, silvered over the inside and stoppered. This is reputed to contain a witch, and the late owner, an old lady living in a village near HOVE, SUSSEX, remarked, “they do say there be a witch in it, and if you let un out there’ll be a peck o’trouble."

As, indeed, happens in The Ghost of Thomas Kempe. I  don't know if Penelope Lively had this bottle in mind when she wrote the book, but I find these kinds of objects both fascinating and evocative. They suggest a deep and abiding fear of and belief in witches. They are found in all kinds of buildings, from the grandest houses, to simple dwellings which would indicate that such belief was ubiquitous. From the highest to the lowest, no-one was exempt.
Posted by Celia Rees at 00:30

Thanks for the new word, "apotropaic." I'm quite sure I'll use it. What a delightful post. I love the picture of the silver bilobed bottle.

Fascinating! But not surprising, considering what else was used to protect houses over the centuries, sometimes a lot nastier than a bottle!

Witch bottles. Shoes? Cats? Far better to be safe than sorry, I feel, and I do quite like the thought of that servant thinking she'd found some small way of getting her own back.

I recall my gran talking about the almost spherical greenish glass bowl she owned as her "witch bowl" It was placed near a window to catch the light - presumably an echo of "turning the evil eye back on itself"? Fascinating post.

In the Highlands, Stone Age houses have been found, with human burials beneath the floor. Presumably Auntie or Uncle was buried there so they could keep an eye on the household and protect and advise after death. Perhaps the worn shoes were a continuation of this? - When it was no longer considered okay to bury Auntie under the kitchen, you made a gesture by burying her shoes there instead.
I'm puzzled by the cats, though. If protection was the object, surely a dog would have been a better choice?
I like the 'witch bowl' mentioned above. I have a Scottish glass float hung above the big window in my living room, which is supposed to do the same thing, though I just think it's beautiful.
A mountain ash planted outside is what you really need - 'Rowan berries and red thread, Keep the witches from their speed.'

Very interesting! I grew up in Hove so loved that link. I also have a witch ball in the window, here in Newcastle.

A local artist found a shoe and made her residency about the whole experience, and shared paper shoes in memory of it! http://strathnaver.blogspot.co.uk/p/joanne-b-kaar.html well worth a look.
one of the other things was a fishing bouy made of dog skin!

great word, isn't it, Penny! I thought that, too, Sue. If you can't bury Gran under the hearth, you can bury her shoes.

Thanks to all who have commented. Glad the post has sparked interest.

Though I do have to point out that "Mach" is in Mid Wales rather than North :)

Oh, horror, Nikki-ann and me married to a Welshman, too! I was holidaying with staunch a Welsh speaker when I saw the shoes. Hope she doesn't read this!