MY CORAM CUP by Penny Dolan 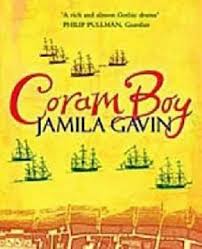 Ever since the National Theatre’s poignant production of  “Coram Boy”, based on Jamila Gavin’s novel for young people, I’ve longed to visit the Foundling Museum. Living in Yorkshire, my trips to London are usually filled with precious family events so it wasn’t until this summer, as part of a short burst of house-sitting, I was able to make the visit.

Paul Theroux, talking about travel writing recently, said writers should always travel alone, except for their notebook. Although my expedition was not a great one, I recognised what he meant.


Well, what a remarkable August day it became! Having mislaid my pocket-sized A to Z ( a well-worn palimpsest of post-it notes and scribbled addresses) I had to decipher the poorly shown street names on my phone, in the dull light of a drizzly morning.

I stared around than usual. I strolled through several garden squares, nicely replanted to reveal their original 18th Century designs and worried the work would be undone by austerity cuts. I enjoyed the Georgian architecture of the district more keenly than during visits when I’ve been wracked by publisher-meeting nerves. 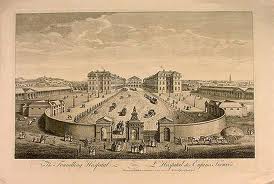 Then just before noon, I bumbled in through the Foundling Museum’s door, all that's left from what was once the Foundling Hospital.

I was immediately greeted and ticketed by a keen young thing. However, she also thrust a large round disc bearing the number 5 into my palm.

Er, why?
She repeated her explanation twice.

Then her words connected with an item I’d partly glimpsed a day or two before on the Foundling Museum website: EXCHANGE.

I had become “one of the ten randomly selected participants who can take home a piece of this constantly changing artwork today.” I had become involved with the work of the conceptual artist, Clare Twomey.

Clare had been invited by The Foundling Museum to create a piece of art inspired by the Museum. The Foundling Hospital, begun by Thomas Coram, used art to attract wealthy sponsors and it was this collection that began the Royal Academy.  Clare's interest, as I understand it, was in the human interactions within the story.

The intention was to provide a home for babies and children whose mothers were unable to care for them. There were only a limited number of places, and after the mother had been interviewed, the selected child was handed over and that was that.

Mother. Child. Two things that should go together were separated.

From thoughts like those, Clare devised EXCHANGE, and this is how it worked for me.

Outside the "gallery", like the mothers before the Board, I was told that I only had one chance. I was shown into a large basement room where 1,550 apparently identical white cups and saucers were arranged across five large tables. On the date of my visit, some were no longer pairs. just saucers. 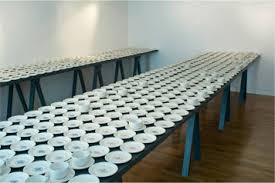 My task was to go round the room, choose one cup only, pick it up and read the good deed, printed within a blue or pink design, on the bottom. If I agreed to do the deed – interpreted in some way to suit my situation - then I could take the cup away with me. If not, I had to replace the cup in the saucer and walk away, like those mothers had to walk away.

No second chance. No other option. What’s decided is decided.

I went around, reading all the now-empty saucers, their words identical to the promised deed on their missing cup. Then I studied the apparently identical pairs, rather as the wealthy sponsors might do, surveying the rows of identically uniformed foundling children or the list of petitions..

Afterwards – I was going to write “after the ceremony” because that is how it felt – all the participants who had chosen a cup queued up. We had our number and deed recorded in a log book. Unlike the Foundling Hospital children, whose names were changed on entry, we were able to write our own names and thoughts.

A few extra visitors had arrived, like tardy mothers. They stood around hopefully, asking if they could be part of the project.
“Not today”, they were told, as others had been in the past.

Not selected. No second chance for you, my dear.
Meanwhile, my blue printed cup was swaddled tightly in paper and placed in a discreet brown paper bag. I brought my cup back home, eventually, to Yorkshire as a reminder to do my good deed when I could.

In case you are interested, my task was to “Use one day of annual holiday to volunteer for a charity.” Being self-employed and without fixed holidays, this task takes some re-thinking. What I take the "deed" to mean is “Go out and do something practical to help people for a day rather than just noodling, daydreaming or writing about it.” Suggestions welcome.

EXCHANGE as an event, closed on the 15th of September, but if you’d like to find out about EXCHANGE, or join in with the project by doing a good Coram deed yourself – sadly, without any cup as inspiration – you can find out about it by click this EXCHANGE or the one above. And if you haven't visited the Foundling Museum, do go!

The CORAM FOUNDATION (now known as CORAM), which is a children’s charity, is not directly involved with arranging the curatorial programme at The Foundling Museum.

What a strange an interesting experience! The Foundling Hospital is on my to-visit list too. I remember reading about an exhibition of the pieces of cloth mothers were allowed to leave for their children...? Not sure if it was a temporary or permanent exhibition.

What a brilliant and thought provoking idea How refreshing and making you thinking....

Gosh. What a strange mixture of excitement and trepidation, feeling chosen and feeling picked upon, that must have felt like!

Fabulous post, Penny! I went there last year and thought the Museum is a wonderful, poignant place. Do let us know your good deed when you figure out what to do with it!

Haunting, in so many ways! Thanks for posting.

I wasn't even aware of the Foundling Hospital and it struck a bitter chord with me as I had to give up my baby back in 1969. I must go there. How serendipitous, to be picked for the 'exchange'. Wow!