Two weeks ago yesterday, the 50th anniversary was marked of the March on Washington for Jobs and Freedom and of Martin Luther King’s most famous, extraordinary and brilliant speech – the “I Have a Dream” speech – which he gave that day. (Footage of the full speech can be seen by clicking here – and if you haven’t watched it in a while, it’s well worth taking the time.)

That same day – August 28th 1963 – was also a significant one in the struggle for racial equality in Britain. Its events were on a smaller scale, and they are not widely remembered now, but this was a watershed moment with momentous consequences. This was the day when the Bristol bus boycott – “the nation’s first black-led boycott against a company openly practising a colour bar”* – achieved its objective.

Nearly seven and a half years after Rosa Parks defied Alabama’s segregation law by refusing to give up her seat on a bus, Guy Bailey applied for a job as a bus conductor in Bristol, in the south-west of England. It was April 1963. Guy was 18 years old, a well-educated former Boys’ Brigade officer, and the son of a Jamaican British Army veteran. He hoped that, after working as a conductor, he would one day be able to progress to being a bus driver. Wearing his best suit and tie, he arrived for his pre-arranged interview. To his astonishment, however, the manager would not see him – he was not even allowed into the interview room.

The manager’s secretary told Guy all the vacancies had been filled. When he said he knew that couldn’t be true, since a friend of his had rung up that very day and been told there were plenty of jobs, the manager came clean, shouting from inside his office to say that the bus company didn’t employ black people.

Guy was shocked. But he had a teacher at night school, Paul Stephenson, who wasn’t. Paul, a youth officer who had grown up in Essex with his African father and white British mother, was a passionate admirer of the US civil rights movement. He remembered Rosa Parks’ courageous stand, and the 1955-56 bus boycott that had followed, which Martin Luther King had helped lead. Now, he felt, it was time for action in Bristol.

Paul Stephenson had helped his pupil Guy Bailey set up the interview with the Bristol Omnibus Company. When the company refused to see Guy, this was the trigger Paul needed. With considerable skill, he got the local press on board with the story and called for a bus boycott, to last until the colour bar was lifted. Soon the national press was carrying the story too.

Black residents of towns and cities all over the country encountered discrimination of many kinds, but in other cities - even as close to Bristol as Bath - black crews did work on the buses. In Bristol, however, the bus company’s colour bar was an open secret – it had already been made public by the Bristol Evening Post in 1961. But to discriminate in this way was entirely legal, so nothing had come of the Post’s revelations. What’s more, the bar was supported by a majority of the drivers and conductors themselves, even though black members of the same union (the TGWU) worked in the company’s garages.


As the boycott gathered support, marches were held, and pickets organised at bus depots and along bus routes. Tony Benn, then the MP for Bristol South East, supported the boycott, as did his party leader Harold Wilson. In London, Caribbean diplomats spoke out against the bus company. And as the weeks passed, the pressure on the company, and on the drivers and conductors – both from the public and from within the trade union movement – grew. At last, on 27th August, the drivers and conductors voted to end the colour bar, and the following day the bus company announced its change of policy. There would henceforth be “complete integration” on the buses.

The next year, Harold Wilson became Prime Minister. He met with Paul Stephenson and told him that he planned to take action against racism. The Race Relations Acts of 1965 and 1968, brought in by Wilson’s government, were the first pieces of legislation in the U.K. to address racial discrimination.

There was a long way to go. Legislative changes were one thing - seeing them enforced, let alone combating the underlying prejudice itself, was of course quite another. But the Bristol bus boycott was nevertheless a major achievement - and one that deserves to be remembered, 50 years on.

For more details about the Bristol bus boycott, see an article on the BBC’s news website here.

For a fascinating history of ethnic minorities in Bristol, from medieval to modern times, see Madge Dresser and Peter Fleming, Bristol: Ethnic Minorities and the City, 1000-2001. 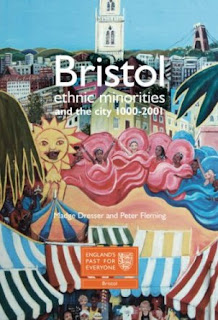 How completely brilliant. Thank you so much for sharing.

Thanks for this, Harriet - I first came across this story in the exhibition upstairs at the Mshed in Bristol - have you seen it? A lot of interesting stories about individuals and the recent history of the city.

Many thanks, Anne. And Sue, my kids have been to M Shed several times and love it, but I've not yet accompanied them. I'm going to rectify that very soon!

A story that needs to be told and re-told - thank you for posting about it.

Definitely an event to be remembered, thanks for doing it for all of us Harriet

The story here in the U.S. occupied my mind, and I didn't know about the Bristol story. Wonderful.

I was three when this happened.my mother and father joined the boycott.I remember it well.we moved to sussex in 1965.I hated my first years in bristol and never encountered non white people till we moved to Haywards heath!this story along with the white supporters has to be told time and time again in these sectarian times!thank you for running this website!jason went ex southmead resident!