SCOTLAND IN STITCHES by Eleanor Updale


We all know about the Bayeux tapestry: a masterpiece embroidered to commemorate the Norman Conquest. 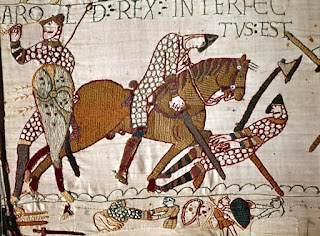 It has endured for nearly a thousand years.

For the past few months, I''ve been involved in the production of a modern narrative tapestry:  The Great Tapestry of Scotland.  At over 500 feet, it's more than twice the length of the Bayeux.  It's the result of about fifty thousand hours of work by over a thousand volunteer stitchers all over Scotland.  Small groups of women (and some men) each tackled a panel depicting an incident or theme from Scottish history. Miraculously, it's finished, and it went on display at the Scottish Parliament this month, before setting off on tour.

The project was the brainchild of the wonderful Alexander McCall Smith - a serious contender for the title of Nicest Man In the World.  The herculean task of writing the narrative went to the historian Alastair Moffat, and the 160+ panels were designed by the artist, Andrew Crummy.  You can see and hear more about how the tapestry was made at this website:  http://scotlandstapestry.com/index.php

The tapestry tells the story of Scotland from the very earliest times to the present day.  This panel is five episodes in: 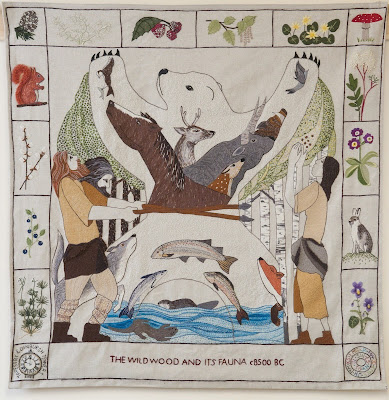 All the things you would expect are included in the story (Robert the Bruce, Mary Queen of  Scots,, Bonnie Prince Charlie, etc) but there's lots more, with a firm emphasis on the lives of ordinary people.
Here's the panel depicting the Black Death in the fourteenth century: 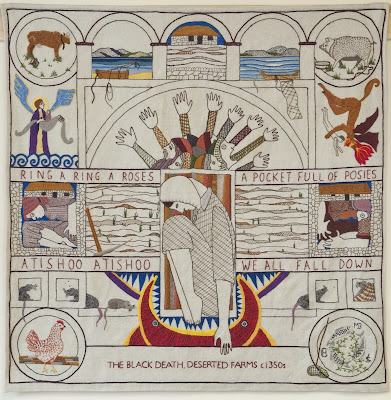 The picture below shows part of the panel I worked on (with a group of authors and publishers, including fellow History Girl Elizabeth Laird).  It commemorates the foundation of the ancient universities. 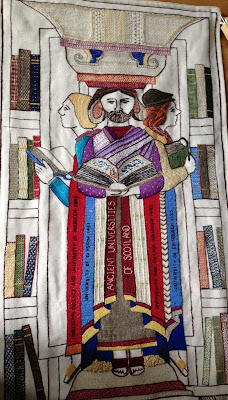 Although some of the stitchers were very accomplished, many of us had very little experience of embroidery, and had to learn as we went along.  We stitched everywhere: at home, at book festivals, at work. I 'watched' all eight episodes of Broadchurch through one long night, without looking at the TV screen (and I guessed whodunnit in Episode One.  Maybe that's the answer).

As the tapestry approaches the present day, it covers the birth of the Edinburgh Festival, the production of the Hilman Imp, and the establishment of the Parliament at Holyrood.  People had to stitch TV cameras, computers, factories, scientific instruments, and bridges.  Not all the episodes are set in Scotland itself.  This is how one group interpreted the Scots' impact on India: 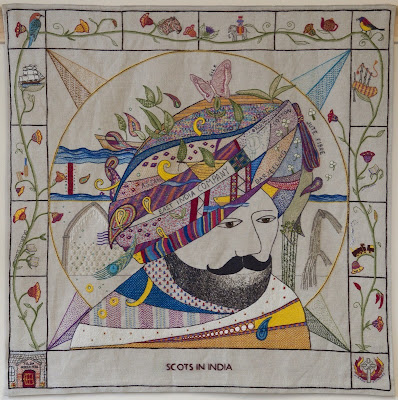 Do try to catch the tapestry if it comes your way.  Seeing it assembled for the first time at the Parliament was a truly moving experience.  As a bit of a dunce on the subject of Scottish History, I found it a very palatable educational tool, too.  I am honoured to have been allowed to play a  part in something that will, we hope, be enjoyed by people for centuries to come.

I've only been able to give you the tiniest taste of what the tapestry is like.
You can see a news reports on the exhibition here:
http://www.bbc.co.uk/news/uk-scotland-23958346

We are all hoping that eventually a permanent home can be found for the tapesty in a place where Scottish people and visitors to Scotland can get to it easily.  So if you happen to know someone with a very big hall they want to fill, just get in touch, and I will pass the word on.

This is a fascinating and important work of art and history. Best of luck to the organizers and to Scotland in regards to a permanent exhibition home.

Wonderful! Who designed it? I have been involved in some projects myself, though nothing like this - they were for charity, one of them done by my science fiction craft group, a quilt for tthe section of the hospital for children who had degenerative diseases and couldn't walk( we created a scene on another planet where a child meets a wheeled alien. ) Another one was autographed by a lot of writers and auctioned for charity. But yours is spectacular! What will happen to it when it has toured?

Maybe because I live in England, I hadn't heard a word about this tapestry, so thank you so much for today's post and bringing it to people's attention.

You talk of working on and stitching the tapestry in a variety of places. Is each panel a mix of stitching and embroidered applique pieces? (It's not easy to tell from the photographs above, and I'm saving the links for later today.)

I'm so glad you like it. It really is extraordiary to see all the panels united.
Here are the answers to your questions:
It was designed by Andrew Crummy. You can read and hear more about him if you put 'The Great Tapestry of Scotland' into Google.
It is entirely stitched, using straightforward woolen yarn, with occasional hightlights of cotton embroidery thread and a little metallic thread on the fishes, etc.
There is no applique.
Most of the stitches used are very straightforward. It's how they are combined and how the colours are used that makes the effect. Many of us were profoundly inexperienced before we started work. Even now, it takes me hours to get the wool through the needle without a threader. One of our team can do it with her eyes shut.
By the way, there is a paperback book about it, published by Birlinn (already available) and a lavish hardback, which will show all the panels, due out in November. See http://www.birlinn.co.uk/Great-Tapestry-of-Scotland.html

This is the MOST WONDERFUL THING I have seen in the last while and I feel vicariously proud of knowing someone who was actually involved in it. As you know, I am mad about such things....I hope very much to be able to visit and see it one day. Are there postcards, do you know?

What a wonderful piece of work. It certainly deserves a permanent home where people can visit.

I hadn't heard of this project either but am delighted to read about it and hope to be able to see the tapestry in real life and enjoy all the detail and the work you amazing people put into it. It seems such an accessible learning aid, a bit like stained glass windows, as well as a memorial/commemoration. In addition, I am feeling very star struck to have my comment follow Elizabeth Chadwick's. I'm currently reading The Summer Queen and it is superb.

Amazing work. Close to unbelievable, really. Having over a thousand people work on a single enormous piece of art is quite a feat but is also a very difficult thing to handle especially with communication and big possibility of not doing things properly. Miscommunication can lead to utter chaos of destruction of the work.
- QualityTapestries.com