The Blackboard Jungle - with Dinosaurs - by Katherine Langrish

C.S. Lewis, in his inaugural lecture as Professor of Medieval and Renaissance English in the University of Cambridge, wrote with customary charm and wit of his value as a sort of living dinosaur.  He termed himself a citizen of what he called Old Western Culture – in sympathy with it in a way in which he felt his audience was not.  And he offered this as both a disqualification and an advantage:

You don’t want to be lectured on Neanderthal Man by a Neanderthaler, still less on dinosaurs by a dinosaur.  And yet, is this the whole story? If a live dinosaur dragged its slow length into the laboratory, would we not all look back as we fled?  What a chance to know at last how it really moved and looked and smelled and what noises it made!  … Where I fail as a critic, I may yet be useful as a specimen.

I was thinking about this recently as I looked through some of my old manuscripts and rediscovered a piece of writing from an (ancient) unpublished novel. A school morning, first day of term: full school assembly.

Coughing, shuffling, the slide of the khaki drugget underfoot.  Herring-bone pattern of woodblocks showing through where a seam had split.  Mr Green the music teacher coming in, talking over his shoulder to Miss Sykes: ripple of interest among the girls. Mr Green was young and wore a beard: he was married, but everyone thought he fancied Miss Sykes, and it made the older girls jealous. He sat down at the organ and played some church music, stopped, grinned at Mr Harvey who was up on the stage fixing hymn numbers, and made the organ groan heavily and breathily.  Then he made it squeak.  Laughter interrupted the general chatter. Then he went back to Bach, and the Head came in, wearing his black gown over his suit, and banged for silence. The noise in the Hall gradually ebbed away into loud shushings from boys who knew the safe ways of being noisy.  Precarious silence.
“I’m very glad to see you all here again…”
Ha ha
“…especially our two new first forms who will please stay behind after assembly.  I’m sure we’re all going to get down and work hard this term…”
Get down from what?
“…so by the Christmas holidays you will startle your parents by being models of perfection and bringing home first class results.”
The laugh came that he had expected, but loud, hard and prolonged.
“Well now – well now –” the noise subsiding – “I shall have some notices to read after the service, but now we will all sing” – he turned in relief – “Hymn number five hundred and ninety-eight.”
Mr Green bent to the keys.
Oh God our help in ages past…

This is a fairly accurate description of a typical morning at my own grammar school in – say – 1974. It's a historical document now. How things have changed! Back then, we had a religious assembly every school morning, complete with Bible and New Testament readings, two or three hymns, and some kind of brief but bracing homily, usually about doing our best. Nowadays full school assemblies are rarely held (for one thing, most secondary schools are simply too big to fit all the pupils in one hall) and religious assemblies - except in church and other religious schools - are not held at all. This is simple common sense. Even in my day, Jewish and Roman Catholic pupils were excused from attendance (we envied them: it gave them time to finish their homework), and in a multicultural world it’s impractical to waste school time on a cap-raising exercise aimed at the established Church. But there you go: one huge difference already between Then and Now.

A small one – what modern child has ever heard of a ‘drugget’?  I don’t know myself where the word comes from; but that was what we called the massive canvas covering which had to be unrolled over the polished hall floor every morning to protect it from the stampeding feet of three hundred and sixty schoolchildren.  It used to slither about underfoot and get ruckled up, but it did the job. Another big difference – ‘two new first forms’?  Only two!  Most schools I visit these days have anything between four to six: a year group can often be around a hundred and fifty to two hundred children. ONE HUNDRED AND FIFTY newcomers to be settled in and taught the ways, each and every September.  That’s almost half the entire pupil count of my old school.

Lastly, in the state sector at least, what secondary school head teacher in this day and age is going to be seen dead wearing an academic gown?  Far from encouraging respect, it would make him or her an object of ridicule.  For you will see that one thing which has not changed at all is the ever-bubbling rebellion, cynicism and disrespect which is the natural state of things when hundreds of energetic young people are shut up indoors all day and told to sit still and listen. At my well-respected 1970’s country grammar school, we regularly reduced one naïve young teacher to tears – especially after she came into school on the Guide festival of Thinking Day wearing her Brown Owl uniform…

Politicians may believe children owe teachers respect.  Children don’t see it that way: they are made to attend school...  Teachers know they have to earn pupils’ respect and earn it afresh every day via a complicated balancing at least as tricky as this... 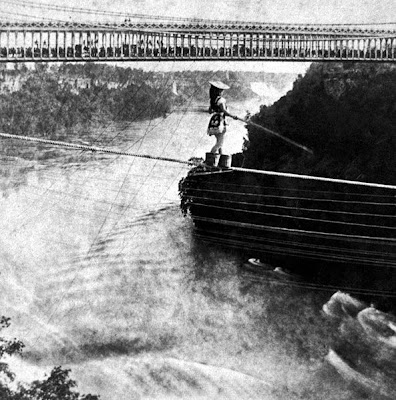 ... and even trickier to make it appear easy and natural ( like this...) 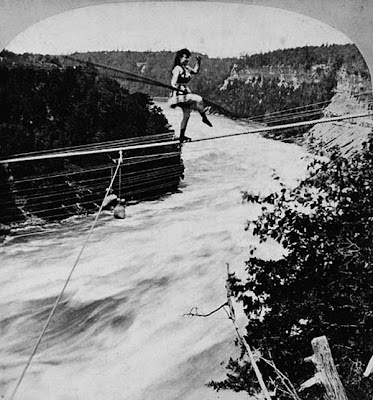 Teachers have to be approachable but authoritative, helpful but strict; they have to have eyes in the backs of their heads and ears like a hare’s: they must be able to sum up characters like a psychologist: must be able to distinguish – in a second – ignorance from insolence, deliberate laziness from honest bewilderment. Teachers need the cunning of Loki, the wisdom of Odin and – to mix mythologies – the patience of Job. They need to be able to remember the names and faces and capabilities of hundreds of individual children. All that, before they even begin to teach a lesson. And here is something else that hasn’t changed: not all of them can do it. There always were and always will be teachers who, by sheer force of personality, can capture the attention and respect of a class: and there were and always will be teachers – good people with excellent qualifications and a real desire to pass on knowledge – who simply can’t manage it.  And their lives will be hell.

As an author I love doing school visits, but I prefer doing full days to half days, because after a morning of talking to a hundred and fifty excited children, there is no way I can go home, settle down, and spend a peaceful afternoon writing.  There is simply too much adrenaline whizzing around my system. The Blackboard Jungle, it used to be called.  It hasn’t changed as much as you’d think, and most of the dinosaurs are still there.


PS. Oh - and the tightrope walker?  She is Signorina Maria Spelterini, crossing the Niagara Gorge on a highwire in 1876. She performed this feat several times, and in the first picture, just to make things a little more difficult, she is wearing peach baskets on her feet.

Posted by Katherine Langrish at 13:27

Things have indeed changed. I'm not old enough to remember that kind of assembly and anyway, we didn't have a school hall. We did have to assemble once a week outdoors to salute the flag and make an oath of allegiance to the Queen(a born republican, I refused to do that, not seeing why an Australian child should honour the Queen of England, no offence!). The kind of assembly you describe sounds like what still happens at some private schools. Here, a grammar school is a private school with Protestant connections, and I can remember ads for teachers with "Christian sensibilities" for such schools.
My own school is pretty small. We have four campuses, each small, and we do have only two new classes each year.

It must feel strange to look back over an unpublished MS and cringe at the out of date style! ;-)

Wonderful post, especially what you said about a teacher needing to earn the respect of the students. So true.

At my US school in Illinois, we had an assembly only once or twice a year. Every morning, though, we said the Pledge of Allegiance. This pledge always seemed odd to me and because I knew about the separation of church and state, I refused to say the "under God" part. I don't think anyone minded, or perhaps they didn't notice.

Great to read this, Katherine. It reminded me of my own Grammar School days in south Norfolk 1961-68. Our music teacher was a) old, b) not a regular teacher, and only came in one day a week to 'do music'. Week after week she ended the lesson with 'does anyone have a favourite hymn?' and week after week someone would shout out "578 Miss!" We all used to love singing 'John Brown's body lies a-mouldering in the grave' instead of the printed words to the Battle Hymn of the Republic. Either she liked to win our favour, or she never learned!