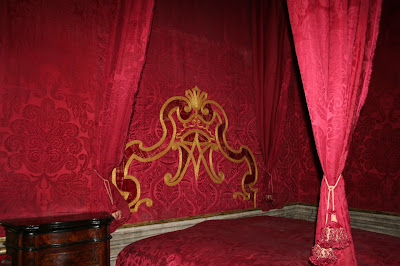 When you mention the town of Tolentino, few know of it beyond perhaps that it has a clock tower with three clock faces and is in the heart of le Marche in Italy. But from the 16th to the 19th February 1797, Napoleon slept here.

In the course of the Italian campaign, Napoleon had occupied Ferrara, Bologna, Ravenna, Imola and Faenza. Pope Pius VI begged for peace and the armistice of 23rd June 1796 was signed at Bologna whereby the Pope undertook to pay 21 million francs, give up Ferrara and Bologna and surrender 500 codices from the Vatican Library and 100 works of art, which were to go to the Louvre in Paris. The French commissioners reserved the right to enter any building, public, religious or private, to make their choice and assessment of what was to be taken to France.

But the Pope violated the terms and when he found Napoleon was on his way to Tolentino, sent a papal delegation to draw up another Peace Treaty. They resided at the very quiet and peaceful monastery of St Nicholas while the forces of France arrived… the French General Victor and 15 000 men and the following day, Napoleon himself with General Berthier. Napoleon established his quarters in a suite of rooms on the first floor – the piano superiore – of Count Parisani’s Palazzo in the centre of town.

One has to imagine the scene. I’ve tried to find accounts but am not sure of their accuracy. One has it that a house had to be knocked down in the narrow street to accommodate the throng of people who accompanied Napoleon to this small walled city. One can also imagine the upheaval in the Parisani household. The rooms still retain part of the furniture and wall paintings of this period along with the desk where the treaty was signed and Napoleon’s red damask-swagged bed.

What I have, are my photographs of these rooms that I found unexpectedly one day as I wandered around the narrow cobbled streets of Tolentino, looking for a kitchen shop. What struck me was the intimacy of the rooms, despite their grand finishes and the beautiful light that came through the shutters of the open windows. It was an unexpected jewel of a museum totally empty of another person.


First in Napoleon's suite at the Palazzo Parisani Bezzi, is a sitting room with a ceiling finely decorated with faux marble, the upper walls finished with a frieze of ribbons and floral motifs. 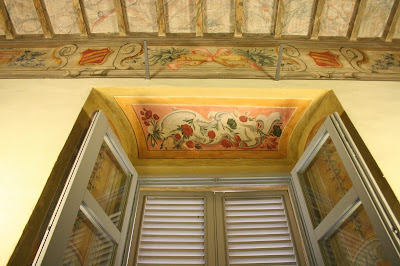 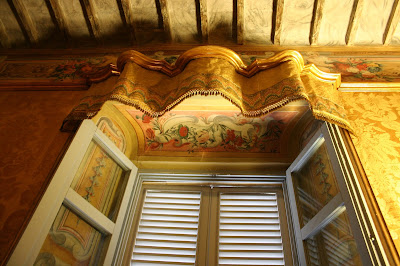 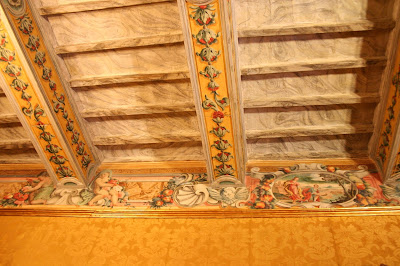 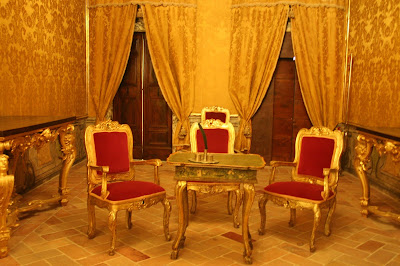 Next is the bedroom used by Napoleon, the walls finished in red damask and towering over the room, the massive canopied bed also in red damask. 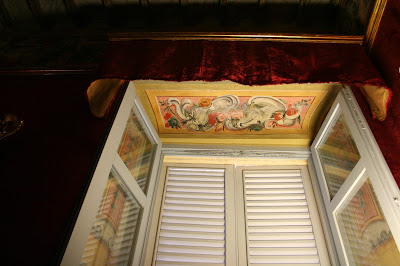 Then there is a washroom with a Tuscan styled vault, reminiscent of a garden pavilion with lavish decorations of ribbons, flower garlands and allegorical figures. 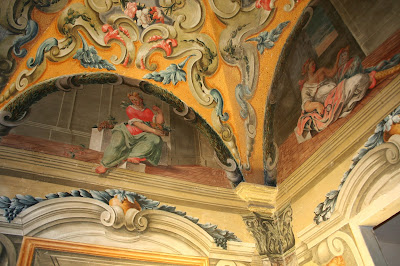 Beyond is the chapel with rich paintings on the walls from Biblcal scenes like Jacob's ladder shown here, and a plaster relief of VM – the Virgin Mary – the same motif as on the headboard of the bed. 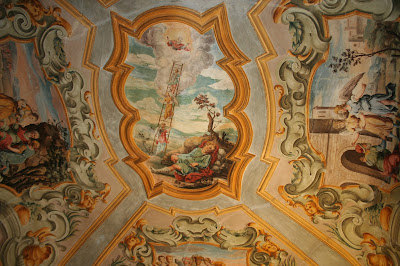 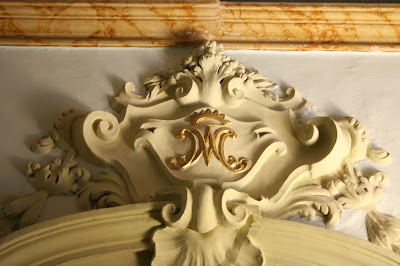 Negotiations began on the morning of the 17th and Napoleon apparently, to intimidate the Italians, went so far as to theatrically tear up several pages of the treaty and knocked over an ink well – the stains of which can still be seen – and threaten he would not be able to hold back his troops should the papal delegation fail to sign.

On the afternoon of the 19th the Treaty was signed. Added to the regions that the Pope was forced to give up to France, were Avignon and Romagna.

Ironically in May 1815, eighteen years later, the Palazzo Parisani Bezzi hosted Baron Federico Bianchi, commander of the Austrian troops, who defeated Joachim Murat, brother-in-law of Bonaparte, at the fort of the La Rancia on the hills just outside Tolentino, just a few weeks before Waterloo. This has become known as the Battle of Tolentino and is seen as the first battle fought for the unification of Italy.

Odd that Napoleon gained his Italian spoils and lost most of them again at Tolentino – a little known Italian, walled medieval city in le Marche that has remained unspoilt since those times and which one enters by passing over the ponte del diavolo – the bridge of the devil – built in 1268 (and a town which also has a marvellous high-design kitchen shop called Casa Oggi)

Totally off at a tangent... but writers and mothers will understand the need to share the news announced in the Bookseller this week – Penquin has made a pre-emptive bid on my son's first YA novel. Can't stop smiling.
http://www.thebookseller.com/news/penguin-buys-hofmeyr-ya-debut.html.

Congrats on the good news about the next generation. Maybe it's the start of a dynasty?

Thanks Linda. No dynasty... I think I'll just quietly retire! And thank you to everyone and all the History Girls who posted on Facebook. I'm in South Africa at the moment.