Getting into the Olympic Spirit? Biographer Clare Mulley is fascinated by the stories behind the Winter Olympics of 1936, and their resonance today.

The twenty-second Winter Olympic Games, and the 2014 Winter Paralympics, will be held in Sochi, in southern Russia, next February. So far thirty-eight nations have qualified to send athletes, including Great Britain. After all the excitement of the Olympics here last year, I will certainly be tuning in, watching the spectacle as much as keeping tally of the medals. By focusing the world’s attention on the host country, the Olympics always seems to provide a fascinating insight into how that nation perceives itself, and how it would like to be perceived.

I recently inherited a box of beautiful old German books, among them the official commemorative album of the 1936 Winter Olympic Games held in Garmisch-Partenkirchen, high in the Bavarian Alps. The cover of this inky-blue cloth bound volume is embossed with a golden bell, inside of which the German eagle perches on the Olympic rings above the legend, ‘ich rufe die jugend der welt!’ – ‘I call upon the youth of the world!’ This was of course an exaggeration. Hitler was the Patron of the games and the Nazis had no wish to embrace young Jewish, Black African, Gypsy, Jehova Witness, gay, communist or disabled people. Nevertheless, just as for the infamous Berlin Olympics held later that year, the winter sports host town was cleared of anti-Semitic signs before the international community arrived, and teams from twenty-eight countries, then a record number, were made welcome. 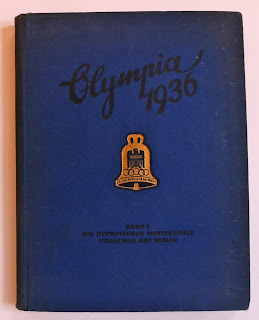 The glossy photographs in the book, each individually stuck in place, provide a wonderful record of athletes launching into the air on their heavy wooden skis, crashing into ice-hockey goals, and bob-sleighing in matching woolly jumpers. The weather seems glorious and everyone is terribly well-dressed. Canada’s Alpine skier, Diana Gordon Lennox, enjoys a break leaning back on the slopes wearing mittens and a monocle, while the British figure skater Jack Edward Dunn sports a white trilby while competing on the ice. 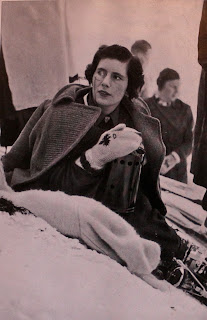 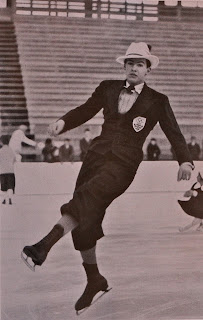 British figure skater Jack Edward Dunn
But not everything is quite so jolly. The only picture printed directly into the book is the frontispiece, showing Hitler and Goebbels cheerfully signing cards for the winning athletes. Hitler had announced that he would be pleased to give his autograph to every medalist - sadly it is not recorded how many athletes took up his offer. 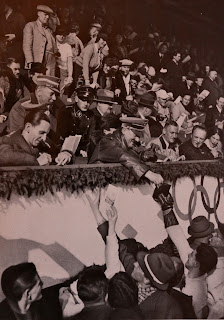 Of the hundreds of faces caught on camera here, only two are black, both in the American Olympic team shot, and there are many more stories hidden behind the pictures. Cecilia Colledge, a Brit who won silver in figure-skating, later drove ambulances during the Blitz, and Czechoslovakia’s beautiful Vera Hruba would escape to America with her mother just two years later when the Wehrmacht entered Prague. 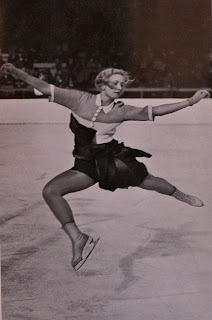 Perhaps the most striking photograph in the book, however, shows the three ski-jumping champions on the podium. Norway’s remarkable Birgur Ruud is on the highest step, flanked by two fellow Scandinavians, all smartly dressed in lounge jackets and plus fours, and looking straight ahead as the Norwegian national anthem is played. Ruud had dominated ski-jumping in the 1930s, winning three world championships and the Olympic gold medal in 1932 as well as in 1936. To the three medalists’ left is the rather less-athletic-looking President of the International Olympic Committee, and beyond him the German President of the organizing committee, Karl Ritter von Halt, whose right arm is raised in the Nazi salute. ‘The German people honoured all the winners’, the accompanying text tells us, ‘with the raised arm as a symbol of peace’. Just four years later Germany invaded Norway and, having criticized the Nazi occupation of his homeland, Ruud was incarcerated in Grini concentration camp. In 1944, after his release, he joined the Norwegian resistance. Surprisingly perhaps, he survived the war, and won silver in ski-jumping at the 1948 Olympics in Switzerland. 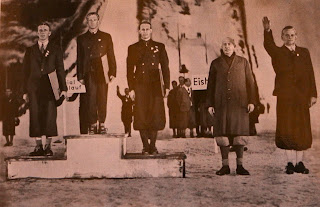 Earlier this month 4,000 people demonstrated in Berlin to protest against Russia’s new anti-gay propaganda law, and call on the German government and all Winter Olympic 2014 sponsors to demand an end to homophobic legislation in Russia. In Britain, Stephen Fry called for a boycott of the games on the same basis and, when this was rejected, he suggested that participants protest silently by crossing their arms over their chests to show solidarity with LGBT campaigners. Three times US national champion figure skater Johnny Weir is against a boycott. In a September interview, while wearing Russian military uniform, the gay American athlete said that he hoped his presence would help empower the Russian LGBT community. However more recently he decided not to register for the US national championships this year, the event at which the US 2014 team are to be chosen, so he will not be competing in Russia. 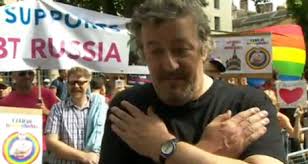 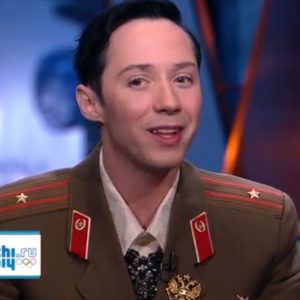 Perhaps, then, rather different arm symbols may be caught on camera during the forthcoming Olympic coverage, gestures of freedom and solidarity. And may be some of the medalists will be able to proudly talk about standing shoulder-to-shoulder on the podium and making their support for human rights clear without fear of reprisals.

Those photos are so evocative - thank you for sharing them!

I was a cleaner at the 1972 Olympic Village and am well aware of how each Games has its own flavour and political context - and I still think it's worth it!

Thanks Joan, I was stunned by the book, the photos were at once so innocent and so very telling. I have never understood the supposed division between sports and politics, and this book is that connection bound in gold-embossed covers. I hope you got a few tickets in 1972!

The book of photographs sounds fascinating. Records like this can tell us so much more than their ostensible subject. Thanks, Clare. Really interesting post!

Just have to add this ps: http://www.youtube.com/watch?v=n4CEaoNADiY