The real highlight of my theatrical life at Oxford was appearing in an anti-capital punishment review called HANG DOWN YOUR HEAD AND DIE in my first year. The show transferred to the Comedy Theatre in London in the spring of 1964 and was a huge success. I will write about it on another occasion, but this centenary production of ALICE IN WONDERLAND in 1965 was also memorable. This is how I wrote about it in YESTERDAY.

The original Alice was one of the daughters of the Dean of Christ Church,

and when the weather permitted, we rehearsed in the Dean’s Garden: a place not generally open to the public. I couldn’t quite get over it. Not having very much to do at rehearsals, I used to lie on the grass and watch the others and say to myself: this is it. This is the real Alice’s real garden. She must have sat here with her sisters. I’m not a believer in ghosts, but I did look for Alice because that small garden was an enchanted place. What I had to do in the play was this: sit up a tree on a specially-designed platform and very time someone sang a song (How doth the little crocodile? You are old, Father William, etc) I had to sing the original Victorian hymn or song that Carroll was sending up. I think I was supposed to be Alice’s sister. All that could be seen of me was the hem of my long skirt peeping through the foliage. This was fortunate because I didn’t have acting permission and appeared in the programme under a pseudonym. The reason for this was: I’d used up my acting ration appearing as (sic) Zenobia Bogus-Bogus in a musical called (sic again) You Can’t Do Much Without A Screwdriver…..

[Addendum: written now rather than in 1992 and not from the book: Here is a photo of me,in that show, on the left, with an actor called Ian Marter, courtesy of the wonderful David Wood who has an unbeatable archive of such memorabilia.] 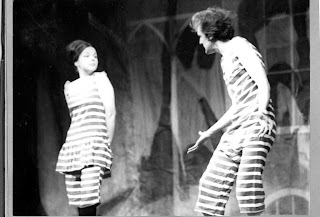 And here is another of me and Diana Quick beating up a policeman during a production number called EMANCIPATION, which had something loose to do with the Suffrage movement. Diana is on the right of the policeman in the middle as you look at it and I am on the left....doesn't matter! It's a fun photo if a little indistinct. 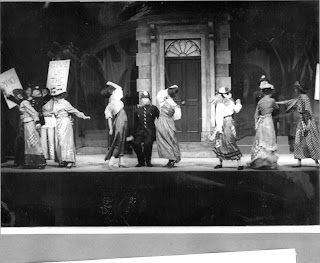 During the Summer Vacation we took the production (of Alice in Wonderland) to the Minack Theatre in Cornwall and set it among the rocks and crags overlooking the sea. Every night, in that amazingly beautiful place,

I pitted my unamplified voice against the waves of the Channel, which much of the time were obligingly whispery and quiet. Most of the company slept in a large church hall. All the sleeping bags lined up on the floor looked like rows and rows of butterflies in the larval stage of their development. Vince and I had a tent in the churchyard, and tents soon ousted caravans from their number one position at the top of the “Uncomfortable Habitation” chart. It rained unceasingly the first few days we were in Cornwall, and at night time, moisture seeped in under the groundsheet despite our best efforts.
Posted by adele at 07:30

How wonderful. Did you ever think of writing under the pseudonym of Zenobia Bogus Bogus? How could you resist.

Lovely post, Adele: what is history to you is fantasy to rest of us.

Such a wonderful account of those days, Adele! Or should I say "Zenobia"?

That photo of you in stripes - dynamite!

What fun! I got lost in Oxford once and found myself outside Christ Church college. Never saw the inside as in this picture, but it looks beautiful. Across the road was the shop used by Tenniel for the Old Sheep shop illustration. It was, of course, an Alice souvenir shop.

Yes, Sue...I've been to that shop! And yes, Christ Church is lovely. The whole of Oxford, actually and I don't feel a bit disloyal saying it, even though I now live in the OTHER PLACE...also gorgeous, of course!

Hello, Adele
I too was in Alice at the Minack - the Duchess's cook (Sue Watson, Somerville '64). My home was in West Cornwall and my parents always remembered with affection the long line of bodies from the cast coming to our tiny house for a bath and to be fed on my father's baked goods. I also remember Ian Marter - a nice man- from Faustus. Somewhere I have a flimsy disk of Screwdriver with you - I think - singing 'It's not just the noise that the bagpipes make, they look so disgusting too. If I had a set to keep as a pet, I'd feed it on Irish stew.' And now I too live near The Other Place, out on the Fens.

Adèle - You look so cute / In your stripey suit!