The oldest floating ship in Africa . . .

... is named after a vicar. Here he is, on the left: Archdeacon Chauncey Maples, with his friend and fellow missionary William Percival Johnson, in 1895 : 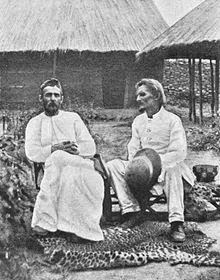 The year this photograph was taken was the year the Archdeacon died. He was 43. At 24 he had left the UK for Zanzibar, where he had set up schools for freed slaves. He was on his way to start work as the Bishop of Nysaland when his ship capsized on Lake Nyasa (as it was then called - Lake Malawi, now). Eighteen Africans on board survived, but Maples and a fellow missionary, Joseph Williams, drowned. He was dragged down by the weight of his cassock.

And here is the ship: SS (now MV) Chauncey Maples, four years after her launch, on Lake Malawi. 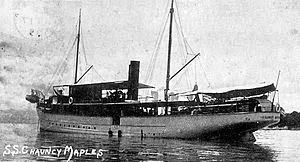 She was designed by IK Brunel's son Henry Marc Brunel, built in Lanarkshire, and then dismantled again into kit form. There were 3481 parts, weighing 150 tons, to be shipped to Lake Nyasa in vast packages, by cargo ship to Portuguese East Africa, and then towed in barges up the Zambezi.

The last 350 miles were overland. The parts, including the 11-ton boiler, were hauled and carried by Ngoni tribesmen, at an average of 3 miles a day.

The ship took two years to reassemble (the part numbers had been printed before galvanisation, so they were difficult to read) and was launched in June 1901.

She cost £9000, and her job was to be a hospital ship, a missionary school, and a temporary emergency refuge from slave traders.

During World War One she was a troop carrier and gunboat; in 1953 she was sold as a trawler. Here she is in the 1950s:

In 1967 the Malawian government bought her, to act as a passenger and cargo ship. The lovely comedian, singer and cleverclogs Kit Hesketh Harvey, who was born and brought up in Malawi, remembers her well from the 1960s. 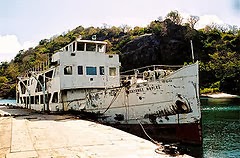 And then she went into a decline, laid up in Monkey Bay, with a low-down bar on the bridge. My cousin was having a drink there one night and thought, 'Wouldn't it be marvellous if . . .?'   Her motto, nb, is: 'With ordinary talents and extra-ordinary perseverance, all things are attainable' - (Thomas Fowell Buxton, 1786-1845)

So, the Malawian government has contributed, and a huge amount of money has been raised - half a million for example just from The Big Row this month, sponsored by City firm Thomas Miller.

A recent examination found that Chauncey Maples' tough Victorian steel hull, though single -skin not the modern double-skin, is better and stronger than those of many younger boats.

Work has begun to fit her up to do her own old work - a travelling hospital for the communities round the lake who have little or no access otherwise. 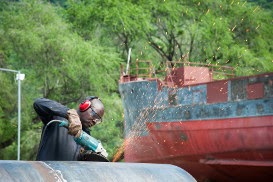 Life expectancy in Malawi is under 50.
-

I know this isn't the place for fundraising, so I won't give a link to that,  but it's easy to find the appeal on the web.

This is from Louisa Young, with great apologies for the lateness -

I love your site! You will be in our prayers and thoughts! Nice and informative post
on this topic thanks for sharing with us.Thank you