'Strike while the iron is hot' by Karen Maitland 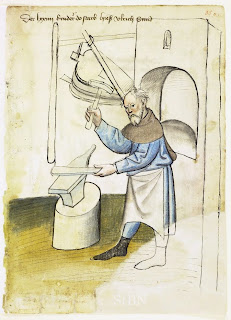 I have just moved to an old Devonshire Cob cottage and discovered there is a blacksmith’s anvil in the garden. I’m thrilled because I love old tools. Touching something that craftsmen have used is like holding hands with our ancestors from the past. But I was doubly delighted by this find, because blacksmiths often feature in my novels. They were a pivotal figure of medieval life. Their importance is illustrated by two legends told about them.

After the temple in Jerusalem was completed, King Solomon threw a party for all the craftsmen who’d assisted in the building, but the blacksmiths were not invited because he said they had done nothing to help. But the blacksmiths pointed out that the tools of all the other craftsmen had been made by them, so without them there would be no temple. Solomon saw the wisdom in that and gave the blacksmiths the place of honour at the feast.

The second legend concerns King Alfred. He held a competition to determine the best craftsman. Through bribery, the tailor won and the blacksmith was so furious that he called all the blacksmiths to go on strike. Soon the tools of the other craftsmen wore out or were broken and they were unable to work. They desperately tried to mend the tools themselves, but only succeeded in shattering the anvil. 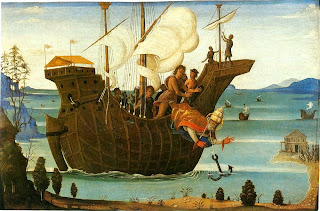 St Clement, patron saint of blacksmiths (because he was drowned with an anchor made by a blacksmith) demanded King Alfred change his mind and declare the blacksmith the winner, which he did. But the tailor, in a jealous rage, hid under the table and slashed the blacksmith’s apron, which is why their traditional dress is a ragged apron.

This story was always re-enacted on 23rd November when blacksmith dressed as ‘Old Clem’ was led through the town to collect drinking money from the households. Probably one of the reasons it came to an end was because the parade culminated in the blacksmiths filling the hole in an anvil with gunpowder. They then set off the explosion with a spark from the blacksmith’s hammer. Not something Health and Safety would approve of today. 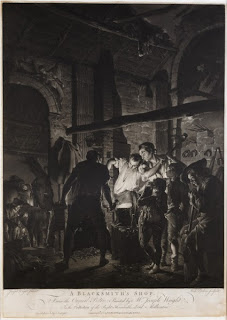 Of course, the real reason why blacksmiths were not invited to parties may have been that people were afraid of them. Their almost mystical ability to perform the alchemy of working with iron born from earth, fire and water, made them figures with great magical powers. Many were said to possess the gifts of toadsmen or horse-whisperers, which gave them power over horses, pigs and women, and the ability to curse as well as cure.

One of the tricks of the trade was to use 'drawing oil' and 'jading oil'. The blacksmith would dip a small bone in drawing oil. In Victorian times this was often a mixture of aniseed, cinnamon, nutmeg, rosemary, thyme, opium and orris-root powder. Horses love the smell and with this concealed in the blacksmith’s fist, the horse would obediently come towards him as if drawn by magic. In the blacksmith’s other pocket was bone covered with repellent herbs – jading oil – which when wafted in front of the horse would make it stop dead, or if waved behind it would make it rush away to escape the smell. These bones could also be used to spook a horse if the blacksmith wanted to get back at the owner. 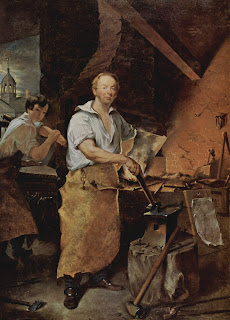 Many cures were attributed to blacksmiths. If a child was ailing, he was brought to a forge at midnight and laid naked on the anvil. Seven blacksmiths from the same family would stand over the child and pretend to strike him with their hammers. If the child showed fear, he would recover, If he did not react he would die. I imagine that it was also a sure-fire ‘cure’ for any child foolish enough to pretend to be ill to escape work or school.

Laying a child naked on an anvil, and striking the anvil was a cure for whooping cough. And the water in which the iron was dipped to cool it was greatly prized as cure for thrush and ringworm. Blacksmiths were also blood charmers. If a wound wouldn’t stop bleeding the bloody bandage was taken to a blacksmith who would touch it and the bandage would then be retied over the wound and the bleeding would stop.
With those powers I’m beginning to think I should put my anvil to good use. Perhaps I’d better go and start shredding my apron.

If the child didn't react, he'd have to be REALLY sick, so this doesn't surprise me. ;-)

Of course, there's also Terry Pratchett's Mystical Word whispered in the horse's ear, a threat to hammer its goolies. (G)

Fabulous post with lots of delicious blacksmith fun-facts. I love it.

The cooling bucket would be much like kombuko that vinegary tea since the heating would kill off bacteria and the acidity from the iron would keep them out. Anything that survived would compete in the gut with whatever thrush infestation or fungus was ruling you. I expect the wound healing came indirectly from here too. Since the cloth bandage would be rancid with bacteria. Plus the acidity would delay the regrowth. Then of course you had cauterising.
As to the fear they were held by the general population. This was likely due to their proximity to the local lord. The blacksmith together with the miller were unique in their access to the inner courts of the castle. Lose a blacksmith or and a miller and your estate became a waste.

A really interesting and enjoyable post. Love all the blacksmith stories, especially the blacksmith's strike, and feel that St Clem's Night anvil strike - with the gunpowder - would have been a powerful sight - from well back!

Great post! There is something faintly spooky about blacksmiths. Do you know the song of the Coal Black Smith (a version of the Two Magicians) in which a sinister smith has a magical duel with a woman enchanter?
The father of someone I know used to be head horseman at a big house in Norfolk before WW2. He was supposed to 'have the horseman's word'. One of his party tricks was to line up all the horses of the estate, about 30 of them, and give a sign on which they would all pee at once.

Super post! I know how you feel about old implements. We have a rusting metal (iron? ) roller at the bottom of our garden. I regard it as an 'installation.' Lovely!

I hadn't come across the story of the attracting and repelling oils before- fascinating!

I wonder if some of the awe and magical abilities attached to the mythic Germanic master blacksmith Wayland the Smith, of Anglo-Saxon legend, lingered on in the collective consciousness?