From Blog to Book - Lucy Inglis 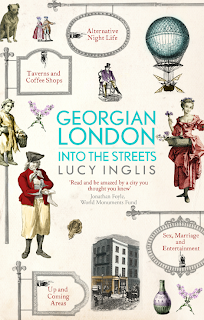 Four years ago this month I started the Georgian London blog, to discuss the lesser known aspects of the eighteenth century city. The blog gained traction quickly as it explored immigration, disability, crime, sex and other subjects like retail culture and music.

In turn, that blog meant an agent found me, and almost a year after the blog’s first post I had signed a deal with Viking books (a Penguin imprint) to write Georgian London: Into The Streets. Although I had been working in the eighteenth century for a decade, there was still considerable specific research to be done on each area of London and how it evolved through the Georgian period. That research also fed the blog, but it was important to only blog the stuff that wasn’t going to make the final cut for the book. Sometimes it was hard to choose!

Any writer will tell you that time moves at a different pace in the publishing world. It is the complete opposite of blogging and social media, which are perfect for instant gratification. Publishers are used to taking their time to make sure that every element of the book is right, not just the text. For writers, sourcing maps and images, and securing permissions quite literally takes months. But there is little to compare with seeing and holding your finished book for the first time.

The book is out this coming Thursday, so I’m feeling like a nervous mother putting her only child into school for the first time. But the journey from blog to book has been a tremendous process in which I have learned so much. Not just about a subject I love, but about how books are made, the collaborations that are necessary between writers and editors, the teamwork involved in making books as beautiful and covetable as they are.

I’m still very proud of the Georgian London blog and it is still the largest online collection of free material on its subject. People often ask me why I began writing ‘for free’, about such a niche subject. One Sunday, in the summer of 2009, I stood on the steps of St Paul’s Cathedral and listened as the bells called to worshippers and tourists alike. People loitered chatting, or climbed the steps and went inside. I imagined this clamour was almost exactly the same as it had been three centuries ago. I recorded it on my telephone and walked home.

For years I had dragged my husband to churchyards, houses, demolition sites, public monuments and hidden memorials, telling him the stories of people long dead: cabinetmakers, slaves, domestic servants, weavers, chimney sweeps and prostitutes. Back at home I played him the recording, my precious moment of shared experience with Londoners of the past. His dry recommendation was to start blogging the tales I had accumulated and what I believed about Georgian London. The blog’s instant and enduring popularity reassured me that there were people who were as interested in these stories as I was, and that interest sustained me through the long journey of writing the book. It is a tribute to the people of the eighteenth century city and testimony to the eternal feeling that if I could just run fast enough through London’s endless archives I will catch them, grasp their coat tails and make them tell me everything about being a Georgian Londoner. And that is why I blog for free, because the best blogs whether written by one person, or like this one, many, are the ones that are born out of a deep passion on a subject, any subject. The passion of the contributors is what makes them stand out from the millions of others out there and I'm proud to be a History Girl. So if you have something you love as much as we love history, get to it and start blogging, you never know where it might take you.

I hope my love of Georgian London is evident in the pages of my book. My book! Four years ago I hadn’t imagined I would ever say those words. Now I can. It’s been an incredible journey. And as of Thursday, a new one will begin.

Many congratulations on your wonderful book!

many congratulations on the book, Lucy, and on the blog, which is a marvellous, marvellous thing. You are the consummate History Girl!

Your story of love for your subject is an inspiration Lucy, thank you so much.