The secret of the orange sheep - by Eve Edwards

Mark Twain was a clever chap.

For research for my next book project, I am thinking about late nineteenth century writers and he bobbed to the surface today.  He is not alone in his wit in this era, of course, but I was reminded today of just how apposite are so many of his sayings.  You probably have heard repeated over the last few years his banking wisdom: 'a banker is a fellow who lends you his umbrella when the sun is shining, but wants it back the minute it begins to rain.'  Really, I think after reading that there is no need to go study that degree in Economics; he has said all you have to know.

One of his most famous sayings is 'Truth is stranger than fiction, but it is because Fiction is obliged to stick to possibilities; Truth isn't.'  That's where the orange sheep come in.  Our family holiday took us to Glenlyon, a glen just north of Loch Tay in Perthshire.  Imagine the rolling hills, clouds that hang on the mountain sides making the dark pine plantations seem like they are on cold fire, the birds of prey poised over prey, glorious stone bridges arching like grey cats stretching over a peaty rivers, green fields full of orange sheep with black faces and legs...

Yes, orange sheep.  Not the usual mark of tupping on the back or ownership smudge but completely orange.  If you don't believe me, here is the picture. 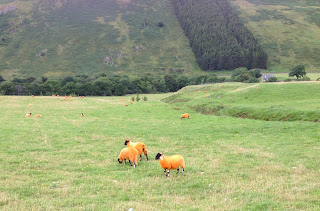 Please note the rectangular plantation behind courtesy of the Forestry Commission - the Scottish landscape going very post-modern.  The vision of tangerine sheep provided my family with an hour of speculation, ranging from the boring (dipping treatment) to the fashion statement to the invasion by alien sheep theory.  The problem for a writer is that you can't just drop that into a passage of description without it seeming, well, very odd and in dire need of explanation.  In the real world, such things aren't explained, they just are.

As if to underline this point, just down the road from the orange sheep is the noted village of Dull.  Twinned with Boring, Oregon. 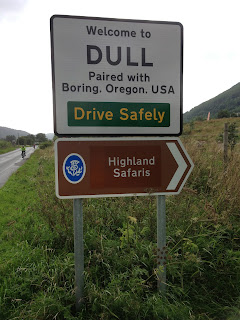 How can we be expected to drive safely, people of Dull, if you sprinkle your fields with alien creatures?  Now I am having nightmares about what exactly you might see on one of their highland safaris!

Mark Twain had clearly come across a few of his own 'orange sheep' moments to make his comment.  I wonder if any reader of this blog has one or two to share with us, particularly if they have found them as part of research for a historical book and had to discard them as too unusual to fit in fiction?

(P.S. My latest book, Dusk, is now out.  Sadly lacking in orange sheep but there are some very surreal 'real' moments from World War I, taken from diaries or accounts of the time.) 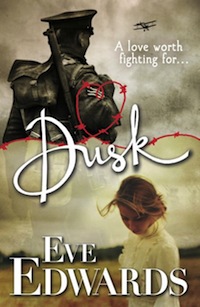 Great post! But be careful with Mark Twain quotes. There were lots of witty writers in the late 19th century and he attracts many of their aphorisms like a magnet attracts iron filings! Good site here for authentic quotes. www.twainquotes.com

Re the orange sheep, your Scottish farmer probably got the idea from a Dartmoor farmer who dyed his sheep orange to stop theft! :-)

Actually, now you've got me hunting this down, there's a better examination of the issue, Caroline, here http://quoteinvestigator.com/2011/04/07/banker-umbrella/
My vote goes for Anon.

A delightful post. You sent me looking on the map for Boring, OR. Maybe I'll check it out.