I’ve written before about the Natural History Museum in Venice, quite recently reopened after decades of restoration. I’ve recorded how, among all the state-of-the-art graphics, tools and devices, the visitor can find the dusty remnants of a vast collection of hunters’ trophies from the days when ‘men were men’ and not ashamed to murder helpless animals in the name of sport.


Walking swiftly past the espaliered gorilla and the dozens of mounted heads, I always make my way into a little circular room where the museum keeps its curiosities. The room is styled like that of the famous Neapolitan collector Ferrante Imperato (1550-1625). The image below shows his cabinet of curiosities in the Palazzo Gravina in Naples. In this picture, it is thought that Imperato’s son, Francesco, is showing off the collection to a pair of visitors. Meanwhile, his father looks on with what seems to me to be a rather affected nonchalance, legs casually crossed. 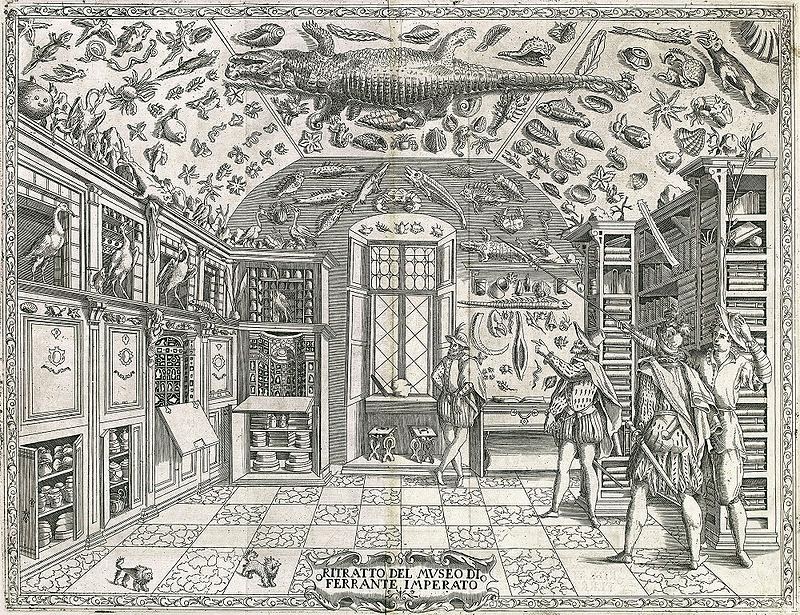 Imperato, who trained as an apothecary, collected and classified flora and fauna. He was also interested in fossil, ores and gems. He recording his findings and inventoried his collection of about 35,000 specimens in his 800-page Dell’ historia naturale published in Naples in 1599. This title page, courtesy of Wikimedia Commons, is from the copy at the Houghton Library, Harvard University. This book was a rarity in its time, being written in Italian, rather than in the more traditional Latin.


In the first picture above, Francesco Imperato uses a long stick to point to one of the exhibits. One writer has suggested that the crocodile is above so as not to distract visitors from the less spectacular ores and minerals. But the baton seems to me to point at a bird. Is it the remains of a chicken? Perhaps.


Certainly in the Ferrante Imperato ‘tribute’ room in Venice’s Natural History Museum, a chicken occupies pride of place. And it was there that I found 'The Monstrous Chicken'.


When talking to the curator Margherita Fusco, I discovered that this chicken had a history all of her own. As we History Girls are taking a beastly turn this month (see the blogs of Mary Hoffman and Louisa Young), I thought I would write the biography of this chicken. 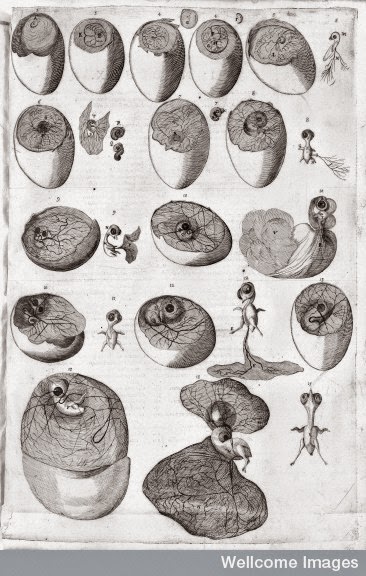 In most ways, she was a chicken like any other. Like any other chicken of the mainland Veneto, that is. Her development in the egg would have followed the destiny engraved in a book, closely contemporary to Ferrante Imperato’s Dell’ historia naturale: Hieronymous Fabricius’s De formatione ovi et pulli, 1621, as shown above.
Except this chicken did some extra growing.


Two extra legs, to be precise. 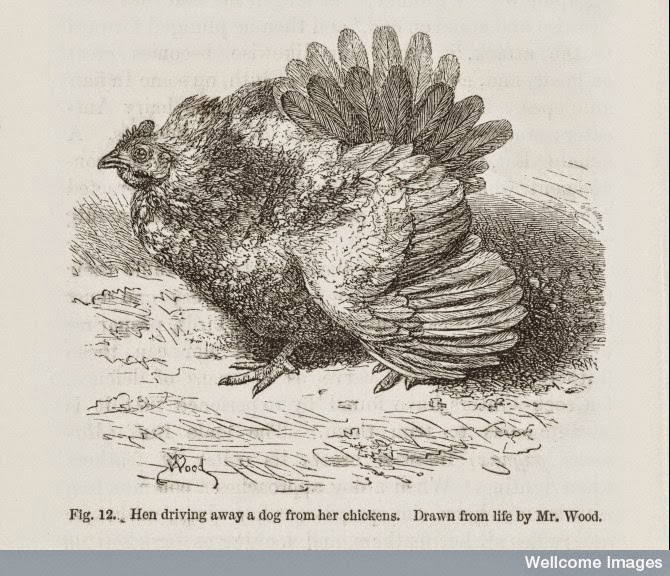 Despite popular superstitions against ‘freaks’, her farmer let her live, as did the other chickens in her coop. She grew to maturity. Apart from the legs, she probably looked rather like this illustration of hen from Charles Darwin’s 1872 work, The Expression of the emotions in Man and Animals. 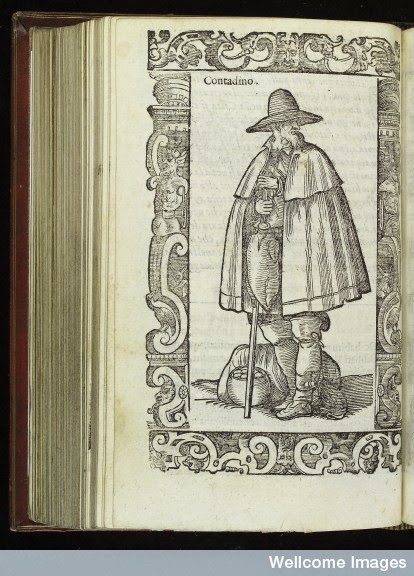 One can only hope that she was not carried upside down like this contadino's chicken.

At the Treviso market she was seen by Emilio Ninni, the curator of the Natural History Museum in Venice. He bought her straightaway, and took her home. She became both a pet and living case-study for him. 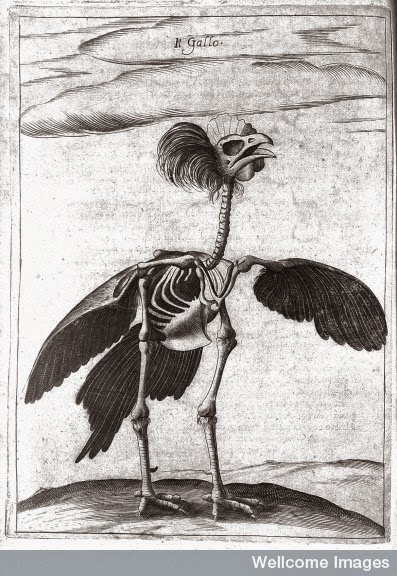 And here is Ninni's cross section of the skeleton of the chicken from Treviso. She had two pairs of limbs like this. 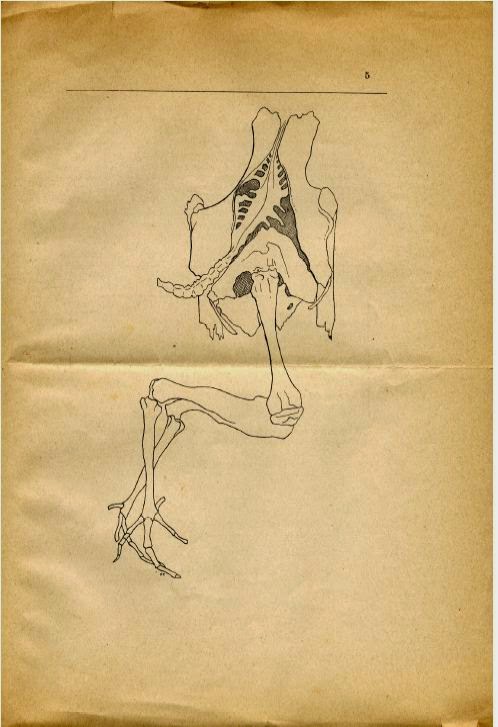 Apart from the extra set of limbs, the scientist observed, this chicken was not much different in stature from others of her species. ‘Perhaps a little taller,’ he observed. She ate rather well and walked without any visible impediment. However, he never saw her run and he never heard her sing. She submitted patiently to his examinations.

Sadly one day, Ninni found her drowned in her water bowl. Possibly, it was on account of her extra legs that she fell into this peril, unlike ‘her other companions in slavery’.

Ninni examined the skeleton of his former pet, and published a short academic paper on ‘Lo scheletro di un uccello mostruoso’.  The skeleton of the freak or monstrous bird. 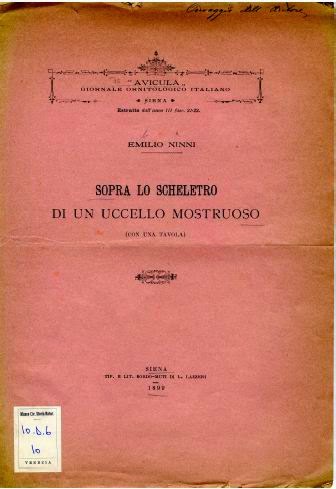 Ninni’s four-legged chicken found her way into a display cabinet in his museum, in which you can also see a ‘baby mermaid’ made of a monkey head and shoulders stuffed into a fish, a basilisk confected of a parrot and some sharkskin, and my favourite exhibit of all, the cat of Doge Francesco Morosini, who esteemed his pet so much that on her death he had her mummified with a large rat between her paws.

And all of these creatures played their parts in my children novel, The Fate in the Box, as did the espaliered gorilla, the giant’s skeleton and the billiard table with four rhinoceros legs, which was, of course, begging to come to life and walk carefully down the stairs.

I’ve been thinking a lot lately about what constitutes and constituted a ‘freak’, especially in the 19th century, the setting for my novel, The True and Splendid History of the Harristown Sisters. A minor character in my novel, which deals with the Victorian obsession with hair, is the famous Mexican Gorilla Woman, Julia Pastrana, about whom I have blogged previously in this parish. 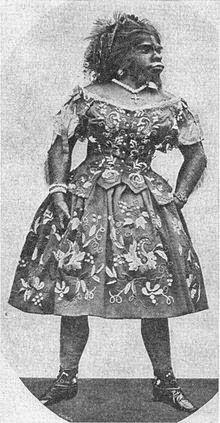 Julia (pictured right) had hair where hair should not be. This chicken had extra legs where legs should not be. Freaks tend to have extra or fewer limbs, larger or smaller features or appendages than ‘normal’. But what is normal? What kind of physiological status anxiety has given us such narrow parameters of normality?  In Victoria times, it has been theorized, Darwin's explanation of our simian origins created such a need to 'monsterize' those who are a slightly different. But what is our excuse today?

And what of the animals in Venice's museum, killed and contorted into bizarre furniture and light fittings on the whim of a trophy hunter?

Who is really the freak in this scenario?

Among all those stuffed and mounted creatures at Venice’s Natural History Museum, there are many other stories to be written. The Curiosity Room is full of creatures that were regarded as freaks. All died before their time. Writing about them is one way, I console myself, of bringing these unfortunate creatures back to life.

Until we find a better one, it will have to do.


In 2012, the museum published a new illustrated guide in English and Italian.

Posted by michelle lovric at 00:00

Email ThisBlogThis!Share to TwitterShare to FacebookShare to Pinterest
Labels: cabinet of curiosities, Fate in the Box, Ferrante Imperato, Michelle Lovric, The True & Splendid History of the Harristown Sisters, Venice

So much material, so many wonderful stories!


Is the fascination with the difference, or with ourselves, or both I wonder:
http://www.bodyworlds.com/en/prelude/ny.html