“At the going down of the sun and in the morning, we will remember them” by Rowena House

At the start of the centenary of the 1914-18 war I had a notion that we would by now, as a nation, have found some sort of collective closure on the individual suffering of the dead of the Great War, and be ready to move on, to toss their bones in the air as it were, and free the spirits of the fallen to join with our distant ancestors.

As a writer, I agreed with Pat Barker’s comment that World War I had “come to stand in for other wars … it’s come to stand for the pain of all wars.” Our stories might be about that particular conflict, but the larger subject was war itself.

Researching and writing my own First World War novel, The Goose Road, dented that conviction. Wherever I looked, the power of individual suffering endured and the personal stories were endlessly shocking, intimate and enthralling.

I fell under their spell time and again while listening to the first-hand accounts of veterans of the Western Front, their scratchy voices forever locked in a sound archive, or when reading a collection of letters home, or interviews granted to earlier researchers. I’d suddenly be caught unawares by a moment of humanity or courage, or dark gallows’ humour.

Occasionally an old soldier would admit to cruelty. More often they shared memories of the drudgery of the trenches, punctuated by terror. To walk those trenches – or at least one of the few fragments that remain, in Beaumont Hamel, say, zig-zagging through a meadow – is to walk in a haunted place.
Near Verdun, there’s a hill called Mort Homme. The name isn’t connected to the 1914-18 war, although the WW1 artillery battles fought there between the French and the Germans were so fierce that engineers found afterward that meters of the entire hilltop had been blown off. Local farmers still aren’t allowed to plough its soil because of the human remains.
When researching closer to home I found that WW1 objects as well as places had the power to take my breath away. Once I was in the Royal Artillery Museum in Woolwich Arsenal, investigating a particular week in October 1916 and a specific section of the Western Front near the occupied French town of Peronne. The archivist bought me out a trolley laden with original material from that time and that place, on top of which was a small moleskin notebook, written in pencil by an English major, the pages still stained with the mud of the Somme. I sat and stared at it for ages, feeling as if the battle itself was within touching distance. 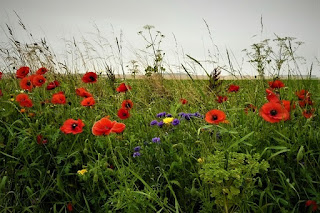 Poppies and cornflowers planted by the local council on the road to Pozières in remembrance of Australian, Allied and German troops who died during fighting in the immediate area
Just before I returned for the second of four research visits to France, my mother died unexpectedly. It was a release: she’d been ill for a long time. Among the heirlooms she left to me was a forget-me-not locket with a photograph of her father, Frederick Clarke, in his WW1 uniform. A stern old lady stares out of the locket’s other frame – my great-grandmother, Selena, I believe.

Mum also left me a heart-shaped locket, which I think must have belonged to Selena as it contained the pictures of two uniformed soldiers, her sons. One is Frederick, who served in the 10th (Irish) Division as a medical clerk and stretcher bearer in the Dardanelles in 1916 and later in Salonika. The other is Frederick’s older brother, Thomas Clarke, a private in the 19th King’s Liverpool Regiment, killed in action on the Somme, on July 30th, 1916.
I’d never seen Thomas Clarke’s picture before I inherited this locket. Mum thought he’d died near Ypres, and as far as I know, until my husband tracked down his regiment’s military records, no one in the family knew the details of his last day. The official War Diary and Intelligence Summary of that engagement is chilling:

“29/7/16 battle position in the MALTZ HORN TRENCH.
30/7/16 BATTLE began. Zero hour 4.45 am. The Battalion reached its objective, but suffered heavy losses, and had to evacuate its position owing to no reinforcements. At 12 noon the roll call was 7 officers and 43 men.
Total casualties were: Lieutenant-Colonel G. Rollo wounded.
KILLED. [Six officers named]
WOUNDED. [One officer named.]
WOUNDED AND MISSING. [Three officers named.]
Total casualties in Other Ranks: 425, of which 76 were killed, 172 wounded, 177 missing.”
Barry Cuttell’s account of that morning in 148 Days on the Somme is more detailed: “Morning mist prevented communication by visual signals, and almost all underground cables had been damaged. The only way of relaying messages to divisional headquarters was by runner, which would be a dangerous task once the fog had lifted as the runners had to cross the open ground between Guillemont and Trone’s Wood, over which German machine guns … enjoyed an excellent field of fire.
“While waiting for zero hour, 19/King’s Liverpool were subject to High Explosives and gas (shelling) … The 19/King’s in the centre was also badly hit by enemy fire, only a few men reaching the road. A little further north, a company of the 19/King’s succeeded in getting forward towards the south-eastern entry to Guillemont.” But later that morning, “Under the impression they were cut off, the 19/King’s withdrew from the edge of Guillemont.”
Thus out of 486 soldiers of the 19th King’s Liverpool Regiment who advanced at dawn on that summer’s morning, north and east from the Maltz Horn Trench towards the German artillery and machine guns, only fifty remained standing seven hours later. The rest were wounded, dead or “missing”, that is, their bodies were either too badly mutilated for individual identification or otherwise unrecoverable from the battlefield.
The rolling fields where Thomas Clarke fell were bronzed with ripening wheat when I saw them, flanked by the once devastated trees of Trone’s Wood. My husband, a former Royal Marine, returned there on July 30th, 2016, to pay our respects, both on the battlefield and at his graveside in the Bernafay Wood cemetery. Perhaps his locket – the brother to the forget-me-not one I inherited – is buried there with him.
Rowena House’s debut novel, The Goose Road, a coming-of-age quest set in France in 1916, will be published by Walker Books on April 5th. Website: rowenahouse.com 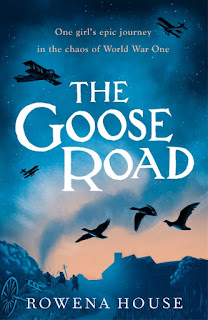 Thanks, Rowena, for your timely post. (Celia Rees will be back on 18th April)

Thank you, Candy. I'm looking forward to it being out!