St Bartholomew the Great and Barts by Miranda Miller

Last Christmas I went to a candlelit carol service at St Bartholomew the Great and was struck by the beauty and age of this Romanesque church. How did it survive both the great fire and the Blitz? I decided to learn more about the history of this stunning church and the great teaching hospital next door - which turns out to be a microcosm of a thousand years of London life. Unfortunately, I only have enough space here to whizz through the centuries.

Both the church and the hospital were founded in the 12th century by Rahere, a courtier and jester at King Henry 1’s court, who later became a priest. It may have been the death of the king’s wife Matilda, followed two years later by the drowning of the heir to the throne, Prince William, in the White Ship disaster, that changed him so profoundly. On a pilgrimage to Rome Rahere fell ill and saw a vision of St Bartholomew, who told him he would get better and must found a hospital ( the foundation legend of Bedlam, or the Bethlem Royal Hospital, is very similar).This story intrigued Kipling, who wrote a poem called Rahere and made the mysterious holy fool a character in Rewards and Fairies. Rahere also appears in Rosemary Sutcliff’s historical novel for children, The Witch's Brat . He became Prior of the Augustinian church he founded and is buried there. In an annual ceremony a rose is laid at the foot of Rahere's tomb, traditionally by a member of the nursing staff at Barts. 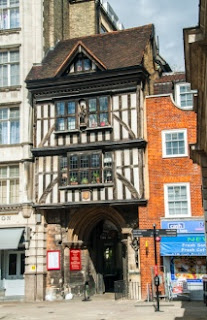 The modern entrance is in Little Britain, through this 13th century arch with a half-timbered gatehouse above, which leads to the churchyard. The original priory was much bigger and grander. After the Dissolution of the Monasteries, the nave and transepts were pulled down and part of it became a parish church. Some of the lady chapel was incorporated into a private house and the rest of the building was used, at various times, as a stable, factory and blacksmith’s forge. Traces of this can be seen in the church, like this curious, very domestic looking window. In the parish church William Hogarth, that great observer of Londoners, was baptised. 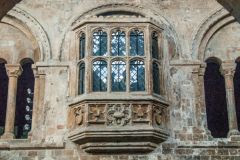 The Hospital lost its saintly title but survived the Dissolution as “The House of the Poore in West Smithfield in the suburbs of the City of London.” One of many fascinating physicians who worked there was Rodrigo Lopez, who fled Portugal during the Inquisition because he was a Marrano – someone of Jewish faith who had been forced to convert to Christianity but secretly observed Judaism. His patients included Robert Dudley and Francis Walsingham. and he became Physician-in-Chief to Queen Elizabeth. Robert Devereux accused him of conspiring with Spanish spies to poison the Queen and he was arrested - his character and trial might have been the basis for that of Shylock in The Merchant of Venice. Lopez was hung, drawn and quartered at Tyburn in 1594

It was at Barts that William Harvey conducted his research on the circulatory system. He was appointed Physician Extraordinary to James I and, In 1628, published his seminal work, De Motu Cordis et Sanguinis in Animabilus, which described for the first time the circulation of the blood as a complete closed circuit with dual components.

When the plague hit London in 1665 the doctors “retired to the country.” But a remarkable woman called Margaret Blague, who was theThe Matron at Barts and was also the widow of a Barber-Surgeon, stayed in the hospital. She continued to nurse the sick and, surprisingly, survived to live until 1675. The following year the Fire of London was finally halted at Giltspur Street, where the entrance to the outpatients’ department now stands, and is marked by a golden statue.

This is the glamorous cover of Sir Arthur Conan Doyle's A Study in Scarlet (1887). Sherlock Holmes, whilst using the laboratories at The Hospital, is introduced to Dr Watson, an alumnus of the Medical College. In the most recent incarnation of Holmes on the BBC, Benedict Cumberbatch threw himself from the roof .

The hospital, like the church, is well worth visiting. Just inside the main entrance on your left is the charming little parish church of St Bartholomew the Less, where Thomas Bodley, founder of the Bodleian library in Oxford, is buried and where Inigo Jones was baptised. Hogarth’s paintings,The Good Samaritan and Christ at the Pool of Bethesda, are on the magnificent staircase that leads to the Great Hall and there is also a very interesting medical museum.

Female medical students were finally admitted to the Medical College in 1947 and, the following year, the hospital became part of the NHS.

Through all these centuries the great meat market of Smithfield swirled around the church and the hospital. Animals were slaughtered here and executions also took place, including that of of William Wallace in 1305. For four days every year Bartholomew Fair was held on Smithfield, a cloth fair that developed into a wild carnival. Bartholomew Fair, a panoramic comedy by Ben Jonson, shows the vivid life of the fair, from pickpockets and bullies to justices, prostitutes and aristocrats.

All moveables of wonder, from all parts,

The Horse of knowledge, and the learned Pig,

The Stone-eater, the man that swallows fire,

The Bust that speaks and moves its goggling eyes,

The Wax-work, Clock-work, all the marvellous craft

All freaks of nature, all Promethean thoughts

Of man, his dulness, madness, and their feats

All jumbled up together, to compose

A Parliament of Monsters.

It was all too much for Victorian sensibilities and in 1855 Bartholomew Fair was abolished.
Posted by Miranda Miller at 02:00

Email ThisBlogThis!Share to TwitterShare to FacebookShare to Pinterest
Labels: St Bartholomew the Great and Barts by Miranda Miller

My step-father Paul Paget was the architect who, with his partner John Seely, renovated Bart's Hospital, Church and Cloth Fair where they lived. Paul, a batchelor aged 71, married my mother Verily at St Bart's church in 1971, with Paul's tenant and neighbour John Betjeman as Best Man. My husband and I arrived back from our camping honeymoon in France 30 minutes before!
When Paul's ancient mother came to stay she was asked,'Do you find London very noisy?' She replied, 'No, it's got much quieter since they invented anesthetic.'

What a lovely anecdote, Janie.