A big apple, and Europe on six floors - Sue Purkiss

I quite often go to Brussels, because I have family living there. While there a couple of weeks ago, I visited two museums that were new to me. The first, the House of European History, I'd never heard of before: I'd read about it in the free magazine they give you on the Eurostar, and it sounded interesting, so my son and I went off to visit it, knowing next to nothing about it.


It's in what's known as the Eastman Building, in the complex which also houses the European Parliament. An icy wind howled around our ears and numbed our fingers, and we were relieved to find the entrance - it took some doing: then a little startled to go through airport-style security. We realised straight away we hadn't allowed enough time to visit it; it covers six floors. Less than a year old, it's the most modern museum I've ever been to: there is nothing so old-fashioned as a label on any of the displays - you are given a tablet, and you have to use that to find out what you're looking at. It's fine when you get used to it, and of course it has the advantage that you can set it to any one of a number of languages - but I couldn't help feeling a little wistful for the simplicity of a label.


The museum focuses on the history of Europe since 1789. It doesn't do it country by country, but focuses on different strands, or significant events. But at the moment there is a temporary exhibition downstairs (which actually looked pretty permanent) of Europe's earlier history - which was interesting and had helpful audio recordings, to familiarise you with, for instance, the Thirty Years War, or the way that banking developed. This exhibition did have labels - though it was almost too dark to read them. I sound a little carping, but I don't mean too; the exhibits are imaginatively displayed, and it's intriguing to see history presented from different viewpoints. A concrete example of this was a display of maps in the permanent exhibition; one was a Chinese map, so naturally it showed China at the centre - and Europe, with all its multiplicity of countries, suddenly looked strangely small. Another was an upside-down view of the world, which showed the southern hemisphere at the top and the northern at the bottom. That was odd.


There were exhibition areas devoted to the First and Second World Wars, and one to the Shoah. There was a display about the legend of Europa, the nymph abducted by Zeus in the form of a bull. I'm really not sure what that choice of names signifies.

And that's really all we had time for - but I will certainly go back. I know now (thanks, Wikipedia) that the museum cost vast sums of money, and is therefore the subject of controversy. I expect they said the same about the Louvre and the Prado, and I'm not sure where I stand on that. But I love the idea of a museum which looks at the story of Europe as a whole, and I'm impressed by the innovative design. As it happens, we heard just afterwards that my grandson is going there with his school, and the children have been asked to take along a story of immigration from their own family - and I like that too: that the museum is not merely a means of recording the past, but that it also reflects on and celebrates the disparate origins of the city's present inhabitants.

I hadn't intended to go to the second museum. This was the Magritte Museum. I'd planned to go to the Fine Art Museum - but I'd forgotten that most galleries etc are closed on Mondays; for some reason Magritte's doors were open. He must be one of Belgium's most famous artists, but I'm not much of a fan of surrealism, so I'd never bothered to go before. You'll be familiar with some of his paintings: a man with a bowler hat and an apple in front of his face, for instance. I still don't really understand surrealism - I suspect Magritte might say that's fine: you don't need to understand - just look. And that's all I did - all I could do, as I'd stupidly failed to spot the audio-guides at the entrance. 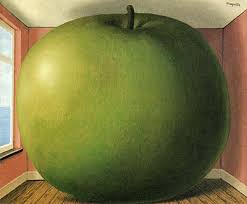 And as I walked round, I became more and more intrigued. I saw that he is incredibly skilled at the actual craft of painting: that apple, for instance, is exquisitely painted. He rarely uses texture: the surface is usually satin smooth. His portraits may have strange things going on, but they usually give a crystal-clear impression of the person who's his subject. Most of all, I liked the paintings he did not long before he died, which feature trees, the moon, and often a house. But the moon, impossibly, is in front of the foliage; and the sky is blue and sunny - but the house and garden are in darkness, lit perhaps by a lamp. They're beautiful, but eerie and a little unsettling: rather like the maps in the House of European History, they make the familiar seem strange - they make you see things differently.

I was still thinking about Magritte as I travelled home the next day. I tried to take a picture of the Belgian countryside as it flew past, and when I looked at the image, I saw it contained reflections from the carriage and even the view from the windows opposite. Aha, I thought. There's a touch of Magritte there. It's good to find your perceptions have shifted. 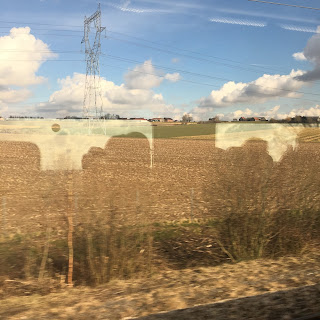 Nice post, Sue. How lucky to be able to learn about another city really well - and visit family at the same time.

(And we have a copy of "The Dominion of Light" hanging on the wall of our dining room.)

Do you? How lovely! I'd never seen it before.

I used to go regularly to Brussels, but haven't been for several years now. Your post has inspired me to go again. Like you though, I think I prefer labels otherwise I spend more time staring at the gizmo in my hand and trying work out what I've done wrong than looking at the exhibits.

Both museums sound fascinating, but the Magritte - WOW! Thanks for this, Sue!

It was, Joan. And I still keep thinking about it.