Fake news, data scamming, trolls…. there are times when it seems the internet or those who control it are trying to nudge us off a cliff. We are distracted and confused, clicking away at our screens to chase away the monsters real, imagined or dressed up as personality quizzes.

Obviously you fine people have chosen to read something sensible, so that’s ok, enjoy your time on The History Girls, but once you’re through reading our years of musings, where should you go next? 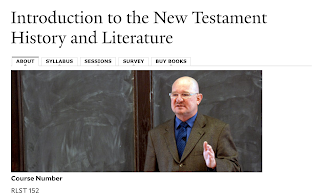 I’m a great fan of podcasts, and have recommended a few of my favourites here in the past, recently though I’ve come across a trove of content which is making me particularly happy. Waiting for you out there in the ether is an astonishing collection of lectures recorded as they were given to hordes of eager undergraduates at Yale, Oxford, Cambridge and dozens of other institutes of higher education. The sound quality is often a bit poor, sometimes the links to the handouts are broken, you might only have an audio version when someone is obviously pointing at a slide, but I'm not complaining. For the first time in history you can listen in to the great educators of your time without having to leave your room. For example, Dale B. Martin’s Introduction to New Testament History and Literature is available via Open Yale Courses and has made me very irritating at dinner parties, it also offers  interesting ways to think about the context and use of scripture in the first century and now. I listened to his lectures while playing Candy Crush on my phone for the whole 21st century undergraduate experience.

Yale offers lecture series on economics, chemistry, geology, astronomy and more as well as history, so go enjoy and become wise while the world around us grows ever less so. Also, go look sooner rather than later. Many of the Yale courses are being moved over to Coursera. For many that will probably be a good thing. Coursera is slick and the content is broken down into shorter sections, supported with quizzes and peer-marked assessments. You can even pay for a certificate if you choose to do so. I tend to scramble away from sites which invite me to ‘introduce yourself to your fellow learners’ though, so I’ll be listening to the echoing halls and coughing undergrads for as long as I have that option. 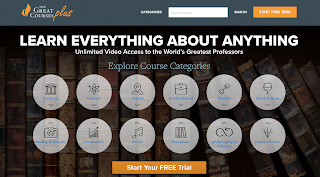 I have seen those adverts in LRB and Literary Review for The Great Courses for years, and am the sort of person who goes - yes, yes I think I would like to own a series of thirty lectures on how to play chess - luckily I’ve always just been a bit too poor to actually buy them. Now via Amazon video, I’ve signed up for their ‘signature collection’, which will probably cost me just as much in the long run but they take the money in small, relatively pain free bites so I hardly notice it. The ones I’ve watched so far all look like they were shot in 1985. Lecturers deliver a paragraph to camera one, then inhale, turn and deliver the next to camera two, then back to camera one again. Sometimes there are pictures, which is nice, even if the borders look my grandmother’s Red Room wallpaper. However that doesn’t matter too much if you are playing Candy Crush, so I just listen to the talking. History of Food has some valuable insights, Reading Biblical Literature is a personal take, but a honestly presented one and a sensitive literary reading, and I’m looking forward to the Cathedrals one.

Or if you are a Netflix person and haven’t watched all of the Ken Burns work available, then do so, now. We’ll be here when you get back in a week or two. His histories of Jazz, The American Civil War, Prohibition, The Roosevelts and The West are beautifully produced - I put down my phone quite often - and offer a fascinating, intimate, illuminating and often harrowing history of the United States. I feel absorbing hours of his work has helped me understand where we are now with more empathy, and more subtlety than I would ever otherwise have done. Which is, after all, the larger point of history, don’t you think?