The Maharajah's Well by Leslie Wilson

This is the signpost that fascinated me when we first came to live in this area. I guess we were driving home from Watlington Hill, where we might have hoped to see the then-rare red kites. But it took some while before we felt we had time to make the detour to go and see this thing. When we went, we were not disappointed.

Nowadays, charities often install wells in what we call the developing world, and certainly India was the focus of such activity in the nineteenth century. In 1831, Mr Edward Reade, the squire of Stoke Row in the Oxfordshire Chilterns and Lieutenant Governor of the North Western Provinces, was chatting to his friend the Maharajah of Benares about water shortage problems.
'The scenery' (of that part of India) Mr Reade told the Oxford Times in 1872, 'is not unlike that of the Chiltern Hills: the inconveniences, owing to deficiency of water supply were the same. The measures the Maharajah was adopting for the relief of his people were the subject of much of our conversation, in the course of which it would seem I must have mentioned the result of boyish knowledge in the upland of my own district, such as the people being dependent for water retained in dirty ponds and eserted clay-pits. In dry seasons the water used for cooking in one cottage was passed on to do the like office in others, urchins being cruelly thumped for furtive quenchings of thirst and washing days being indefinitely postponed.'

I can understand the problem; though the Thames runs at the foot of the Chilterns, they are dry, chalky, clayey hills, and there are few streams. There are springs, but they dry up in summer and are capricious, appearing in one place for a few years, then disappearing again.

And so the Maharajah set up a charity to help the people of England. That in itself is extraordinary, and salutary, I think, for we always think of charity going out of Britain to the global South. The Maharajah had been educated in England, and he was fond of the country, and fond of Mr Reade, apparently. That's how the people of this rural Chilterns village found themselves with this edifice in their midst.

To get to water, the engineers had to dig through twenty-five feet of clay and gravel subsoil (I know them well, under the thin topsoil of my garden), and then through three hundred feet of chalk, interspersed with two layers, about eight foot deep, of sand. After that they got to a mixture of chalk and shells, and to groundwater at last. There was usually fifteen to twenty-five feet of water in the well, and the daily yield was estimated at between 600 to 700 gallons of water. There were two buckets, one which came up as the other one went down, which were operated by the big, delightfully Victorian mechanism underneath the canopy. What is missing on the print I've posted here is the elephant, which we have been taking small grandchildren to see for years. The exotic structure is no surprise to them, but it must have been for the villagers. It does look as if a small seaside bandstand had decided to decamp to the Chilterns.

Here is a photograph of the well today, showing the pumping mechanism and the elephant. The Vicar of Stoke Row, the Reverend Cyril Isherwood, who grew up in the village, wrote: 'I can remember well, on a beautiful summer evening, having a drink of the lovely, clear water, which in summer was ice cold, but in winter would often be slightly steaming.'

Another sight for the grandchildren is the Well Warden's cottage, a tiny little octagonal house, which looks only suitable for dolls, yet two couples were among the Well Wardens. It was finally extended in the 1980s, adding on a bedroom and a bathroom. It's still amazing that anyone can fit into it.

There is also a cherry orchard. Some of the trees have gone, but it's still reasonably well populated. This was an Indian custom: well keepers could make money from selling the fruit, which was used to maintain the well. The Cherry Orchard was bought for two hundred pounds. Women used to go up the high ladders and pick the cherries and people used to come out from Reading in charabancs to see the cherry blossom in spring, and in the summer to buy the fruit. In the cherry season someone would be there from dawn onwards with a pop-gun or a rattle, to scare the birds away. Only cows were allowed to graze in the orchard, because they are sacred in India.

In 1906, mains water was first brought to parts of Stoke Row from Woodcote, and gradually, every house was served. It didn't taste as good as the well water, but nor did one have to walk to get it carrying two buckets on a yoke. It was also hard to turn the windlass, partly because the cable that pulled the buckets up was getting rusty. The cable was taken away during the Second World War.

The well was restored, as a monument, at the beginning of the '80s, shortly before we came to live in the area.  I can imagine how lovely the water must have tasted, because our water, though it's supplied by the water company, comes from local springs at the top of the hill. Thames Water then put chlorine into it, but when filtered, it is delicious. I wouldn't want to have to carry well water home in buckets, though. We take water so much for granted, but all one has to do is to travel in a country where it's not readily available to realise how wonderful it is to have it piped into our homes. All the same, the Maharajah of Benares's Well represented a major technological advance, and a huge improvement in the lives of the people of Stoke Row. 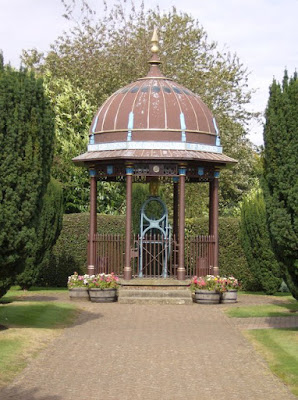 I have got the information and quotes from Angela Spencer-Harper's book 'Dipping into the Wells', which was published in 1999, a fascinating mine of information about the people who once lived in two Chilterns villages, Stoke Row and Highmoor.
Posted by Leslie Wilson at 00:30

A bandstand on its holidays! What a delightful oddity. I've never heard of it -- thanks for telling us about it.

What a wonderful story. I love the thought of the maharajah bestowing his charity - and lovely spring water - on the people of the Chilterns.

What a fantastic structure. I love the elephant and the idea of using the fruit of the cherry trees to fund the upkeep. It must have look amazing in blossom time. I was fascinated too by the description of the awful shortage of water in the dry season. Thank you for telling the story.

I love these forgotten bits of history. It is also interesting to see that charity could come to Britain from other countries that we consider poor!

What a great story, Leslie. I love the elephant.