This year marks the 125th anniversary of the founding of St. Hilda's College, Oxford. For many years, it was a single-sex college but nowadays, of course, it admits men also. St Hilda of Whitby, after whom the College was named by Miss Dorothea Beale, would not have minded at all. She was, as I learned on Sunday February 18th, a remarkable woman who was happy to encourage education, charity and good works in everyone who crossed her path.  I will return to Hilda later but I'm going to begin with Wendy Cope. She is the reason I was in Oxford last Sunday. The cantata St Hilda of Whitby, from which she's allowing me to quote, was commissioned by the Association of Senior Members of St Hilda's College to mark this anniversary. The music was composed by Nicola Lefanu and Wendy provided the lyrics, or libretto, or whatever the words in cantatas are called. I wish I had a photo of Nicola to add to the one of Wendy below, but alas, the ones I took on my phone were dreadful, and I apologise for this gap in my account of this occasion.

Wendy and I were exact contemporaries. We went up in 1963 and graduated in 1966. Our paths have diverged a little over the decades but since 2011, she's been living in Ely and I've been living in Cambridge and she's become one of my closest friends. 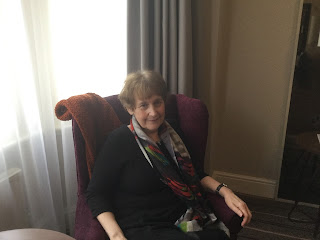 An aside: I knew I'd have to stay overnight, so booked a room in the Mercure Eastgate Hotel, which is very near the College, on Merton Street. I wanted to stay here because this is where, when the place was still a pub called the Eastgate, I heard about the assassination of John F. Kennedy. I've never forgotten that night and I wanted to see if there was any of the old pub left. The answer is: no, there's nothing here that remains of those days, though it is a very pleasant place to stay. 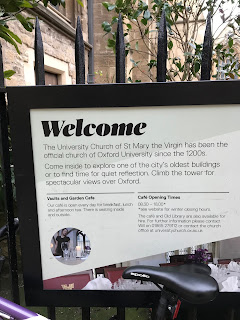 So on Sunday afternoon, Wendy and I set off for the University Church of St Mary the Virgin. We had tea in the delightful Vaults café (another addition since the 60s) and then went in for the pre-concert talk in which Nicola and Wendy spoke about the process of writing a cantata together.  Below is a photo of some of the beautiful stained glass in the church
. 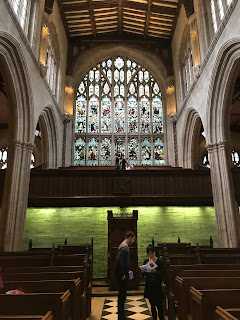 The concert began, as practically everything should begin, with Zadok the Priest by Handel.  This piece of music has become almost a cliché but my goodness it's THRILLING! That set the tone for the whole evening. We heard Chopin, Suk, and Wagner too, and the musicians who played  the piano and the cello were of the highest calibre. All three were associated with the College: a DPhil graduate student, and two undergraduates.  The young man who played Wagner's Liebestod arranged by Liszt is a first year undergraduate. We were entranced by their musicianship and sophistication, and very eager to hear the cantata.  We weren't  disappointed. From the very first note, we were witnessing something historic. We knew we'd be able to tell people: Yes, I was there for the first performance ever...

I don't know enough about music to comment on it knowledgeably, but I know that the melodies and harmonies seemed to soar and swoop and surround us. The music was varied and appropriate to the written words in front of us, and it induced in the whole congregation a mood of celebration and joy and calm. I was transported and engaged and by the end, moved to tears. I do hope very much that a recording is made soon so that everyone can hear  and judge for themselves. 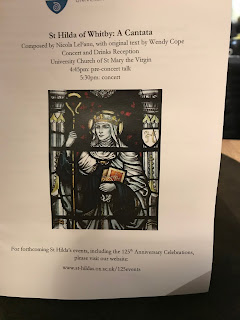 And so to the words. Wendy is celebrated for well-crafted, stylish, often rhymed verse.  She has a reputation for being witty and funny and she can be, but she's also serious when the occasion demands it. Her plain style in this cantata uses words in such a way as to emphasise the freight they carry from centuries of use in prayers and hymns and carols.

"All who knew her called her Mother,
Abbess Hilda, full of grace.
Bishop, prince, monastic brother,
Loved the wisdom in her face."

Most of what we know about St Hilda is to be found in the writings of the Venerable Bede. The story of Caedmon, (which tells of how Abbess Hilda invites him to sing after he'd hidden away during a banquet because he felt unworthy to take part in the feast) is recounted in the words of the cantata.

Abbess Hilda is impressed and invites Caedmon to become a monk. In Wendy Cope's words, she says:

"You are indeed inspired by heavenly grace,
And therefore you will take your vows and be
A brother in our learned company
And live as we do in this holy place."

The singing was most beautiful, with most of those taking part having some connection, either as undergraduates or graduates or faculty, with St Hilda's College. The whole was under the direction of  Jonathan Williams and he and Professor Martyn Harry ought to feel very proud of themselves, as well as of their hugely talented students.

After the concert, we walked down the High to St Hilda's for a Celebration Dinner, which was a combination of good company and good things to eat and drink. Abbess Hilda would have approved of such a gathering and I'm sure she would have loved the music and words written in her honour.
Posted by adele at 01:30

If it can follow Zadok then it must be really something. Do hope there's a recording, or at least a YouTube clip, soon.

What a welcome post, Adele! Recently I heard - or did I read somewhere? - Wendy Cope talking about writing these lyrics and immediately felt that her bright, clear words would make any listening a fine experience, as well as being an excellent tribute the great St. Hilda.

Wonderful. The memories and the present time. I became interested in St Hilda after reading Hild by Nicola Griffith. Wonderful historical fiction that embellishes the little we know from Bede. Have you read it?

When we all introduced ourselves here. We were received warmly by all those who participated in the event. Events at party venue here are a lot of fun, giving access to features that aren't always the easiest to get into and aren't always the most wallet friendly.