In the world of classical music, if asked to name six great composers from, say, 1050 to 1950, most people would probably come up with a list including Bach, Beethoven, Mozart, and could add several others to the list with little difficulty.

But if asked to name six great women composers from the same period…?
Quite.

Most of the great composers of the past have been men.  Only in the last sixty years or so has it been considered that women could ever become composers.

And yet… human nature doesn’t change.  Nor does human talent or achievement.  It is extremely unlikely that during that period of 900 years there were no women capable of composing music to at least equal that of men.  There must have been many prodigiously talented women whose progress in the field of classical music was hindered by lack of expectation, encouragement and opportunity.
However, there were one or two whose names shouldn’t be forgotten.

The first really bucked the trend of her time: Hildegard of Bingen (1098 – 1179).  Renowned 900 years ago for her theological, scientific and prophetic writings, Hildegard is best known today for her “unique and glorious” music.  For most of her 80-plus years she was shut away in an obscure hilltop monastery in the Rhineland, but she left behind a treasure-trove of illuminated manuscripts, scholarly writings and songs written for her nuns to sing at their devotions.  No lack of talent there, then. 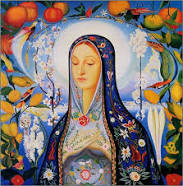 Today this remarkable woman is recognised as one of the first identifiable composers in the history of Western music (most medieval composers were “Anon”). But there were no mentions of her music in any reference book before 1979 and she barely warranted an entry in the 1990 edition of The New Grove Dictionary of Music.

After Hildegard there appear to have been few others to take on the baton for the next 800 or so years – or at least, none whose names have been remembered.  Composing music was considered to be purely a male preserve.

However, in the mid 18th century two young child progidies toured Europe, performing together as “Wunderkinder”.  They were Maria Anna Mozart (called Marianne and nicknamed Nannerl) and her younger brother Wolfgang. Contemporaneous reviews praised Nannerl, and she was even billed first - until she turned 18.  After that her father decided that although a little girl could perform and tour, a woman doing so risked her reputation.  So he took Wolfgang on their next journeys around the courts of Europe, leaving Nannerl behind in Salzburg.  She never toured again. 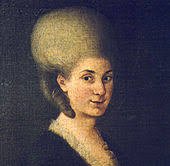 But she did not give up. She wrote music and sent at least one composition to Wolfgang and her father – but although Wolfgang praised it and encouraged her to write more, her father made no comment.  Sadly, none of her music has survived.  We may never know if she destroyed it, or if some of it has survived but been wrongly attributed to her brother.

Fanny Mendelssohn (1805 – 1847) was a German pianist and composer, composing over 460 pieces of music.  Several of her songs were originally published under her brother, Felix Mendelssohn’s, name, but again she was limited by the attitudes of the time towards women.  These attitudes were apparently shared by her father, who was tolerant, rather than supportive, of her activities as a composer.  In 1820 he wrote to her “Music will perhaps become his [i.e. Felix's] profession, while for you it can and must be only an ornament". 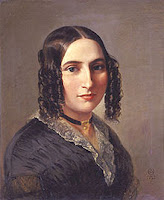 Although Felix was privately broadly supportive of her as a composer and a performer, he was cautious (professedly for family reasons) of her publishing her works under her own name. He wrote:  “From my knowledge of Fanny I should say that she has neither inclination nor vocation for authorship. She is too much all that a woman ought to be for this. She regulates her house, and neither thinks of the public nor of the musical world, nor even of music at all, until her first duties are fulfilled. Publishing would only disturb her in these, and I cannot say that I approve of it.”

Clara Schumann (1819-1896)
In an era when women, apart from singers, almost never performed in public or composed, Clara Schumann did both.  As a pianist she distinguished herself as the foremost interpreter of her husband Robert’s work, but she was also a primary force in reintroducing eighteenth-century keyboard music to the public.  Unfortunately, her own compositions remained unknown until the second half of the twentieth century.  Many are still unpublished and owned by private collectors, so we still cannot appreciate the full extent of her compositional achievements.

During their marriage, Clara was pregnant ten times and bore eight children.  However, even with such a large family, Clara continued to perform, compose, and teach piano, while at the same time she supported Robert and his career.  Schumann encouraged Clara’s composing and contracted publishers for her, but made it clear that his creative work took priority over hers.

Cécile Louise Stéphanie Chaminade (8 August 1857 – 13 April 1944) was a French composer and pianist.  Born in Paris, she studied piano and violin and music composition, despite her father’s disapproval of her musical education.   At the age of 8 she played some of her own compositions to Georges Bizet, who was much impressed with her talents. She gave her first concert when she was eighteen, and from that time on her work as a composer gained steadily in favour. She wrote mostly character pieces for piano, and salon songs, almost all of which were published.

Ambroise Thomas, a fellow composer and Director of the Paris Conservatoire, once said of Chaminade: "This is not a woman who composes, but a composer who is a woman."  In 1913, she was awarded the Légion d’Honneur, a first for a female composer.

She was a contemporary of Dame Ethel Mary Smyth, DBE (22 April 1858 – 8 May 1944)  Dame Ethel was an English composer and a member of the women’s suffrage movement. She was born in Sidcup, Kent, the fourth of a family of eight children. Her father, John Hall Smyth, who was a major general in the Royal Artillery, was very much opposed to her making a career in music.

Undeterred, Ethel was determined to become a composer, studied with a private tutor, and then attended the Leipzig Conservatory, where she met many composers of the day. Her compositions include songs, works for piano, chamber music, orchestral and concertante works, choral works, and operas.  In recognition of her work as a composer and writer, she was made a Dame in 1922, becoming the first female composer to be awarded such an honour.  She received honorary doctorates in music from the Universities of Durham and Oxford, and died in 1944 at the age of 86.

Nowadays, fortunately, women composers are less rare, which one hopes is because of the change in attitudes among the general population, as well as among the musical elite.  There is still a long way to go, but at least now we have the likes of organist and composer Judith Weir, who in 2014 became the first female Master of the Queen's Music. 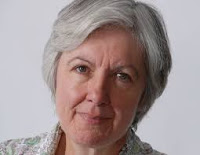 And Debbie Wiseman, who writes music for films and television, and is the resident composer for Classic FM.

It is to be hoped that they and their fellow-female composers will never become forgotten women.

Thanks for this, Lynn - I'm off to chase down as many works by these composers as I can!

Good luck, Joan! I hope you'll be able to find some.

This is fascinating, Lynne. It somehow really brings it home how limited women's horizons were for so many centuries.