The Ritz, Paris by Carol Drinkwater 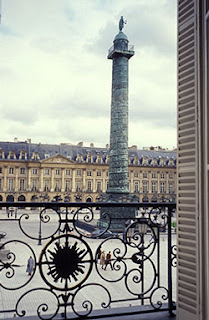 Looking out from a window at the Ritz across the Place Vendôme.

"When I dream of an afterlife in heaven, the action always takes place at the Ritz, Paris." Ernest Hemingway wrote. I wonder whether he would offer the same opinion today, or perhaps he would consider some of the latest episodes in this new era of the Ritz as definitely worthy of a novel.

I am not quite sure why I should have been on the list, but a few days ago I received an email notification informing me that the Ritz in Paris is selling off at auction a large collection of furniture, bathroom accessories, lights and decorations from the hotel's past. The hotel has recently undergone a four-year renovation, closing for the first time in its history between 1st August 2012 and June 2016. The renovations cost in the region of 220 million dollars and are the first since the late 1980s.

The auction will include more than a century's worth of history in amongst the luxury items and
will take place from 17th to 21st April at the Artcurial headquarters on the Ronds-Points des Champs-Elysées, 8th arrondissement, Paris.
If you are interested, there is a varied collection of furnishings and furnitures, some of which they expect to go under the hammer for around 600 euros while other pieces are price-estimated in the thousands.
I shan't be attending or bidding. However, I am fascinated by the history of this  iconic hotel.

The Egyptian, Mohamed Al-Fayed, once owner of Harrods, has been the Ritz's proprietor since 1979 when he bought the hotel for 30 million dollars. During this time, it is has been stained with one or two scandals. Jonathan Aitken, former Conservative Member of Parliament in the UK, was jailed for perjury after a long drawn out trial and public investigation into his stay at the Ritz in Paris while Lebanese and Saudi Arabian arms dealers were also residing there.

In January of this year, three armed men entered the hotel by a service door, used hatchets to smash hotel jewellery stands and broke into a store within the hotel, grabbing watches and various other valuable items. The men threw the loot out to two others waiting outside with a motorbike and a car. The trio within the hotel were apprehended while the two outside escaped with some 4.5 million euros worth of luxury goods. The three suspects were swiftly charged while the two who had escaped let go the bags of stolen goods and made off, according to a spokesperson for the police. The Paris authorities did manage to recover all the stolen jewellery. 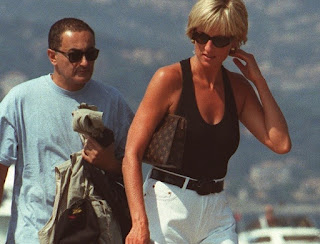 Dodi Fayed and Princess Diana in the South of France

The Ritz is, of course, where Princess Diana and Dodi Fayed, son of Mohamed Al-Fayed, ate their last meal in the Imperial Suite before their fatal car accident on the night of 30th August 1997 in the Pont d'Alma. 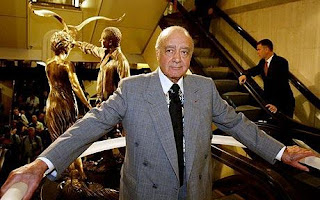 Al-Fayed in front of his memorial to his son and Princess Diana. 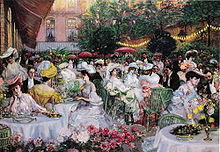 From 1909, Proust found himself a spot in this garden to write sections of Le Temps Perdu, Remembrance of Things Past. Today, the hotel has a Salon Proust.

In earlier incarnations, the reputation of the hotel on Place Vendôme was a little less dubious than it has been of late and was certainly full of glamour and style. It was founded by the Swiss hôtelier, César Ritz, in collaboration with, as a junior partner, the French chef, culinary king, Auguste Escoffier. They met at the Grand Hotel in Monte Carlo where they were both working. The Ritz opened its doors in 1898. It was one of the first hotels in Europe to provide en suite bathrooms. It also offered telephones in the rooms and electricity and within a short time, by the turn of the century, had certainly established itself as an address of luxury, grand luxe.
When César Ritz died in 1918, his son Charles inherited the hotel and it was only at the time of Charles's death in 1976 and a short period of decline that it was sold to Al-Fayed in 1979 who immediately embarked on its first renovation, which took ten years and was achieved without closing its doors.

Over the years, the hotel has played host to the rich, the famous and fashionable society. Cinema stars, royalty, heads of state and artists. Scenes from three films that star Audrey Hepburn were filmed at the hotel.  Fitzgerald, Hemingway - in 1988 the famous bar was given his name. I have to confess it is a bit of thrill to go and sit there and sip a cocktail. Coco Chanel made the hotel her Paris home for thirty years and died there. I have read that along with the hotel's renowned barman, Frank Meier, in 1925 Coco also created the Mimosa cocktail which was inspired by the scented flowering of the mimosa trees in the south of France where she had built a home. The spa at the hotel is the world's first Chanel Spa. Chanel skincare products are used in the treatments.

During the Second World war, from 1940 onwards, it was the headquarters for the German Luftwaffe along with their chief, Hermann Goring.

Of course, the adjective 'ritzy' and the noun 'ritz' as in 'putting on the ritz' are born from the elegance and opulence this hotel has become synonymous with. Today it is a member of the Leading Hotels of the World, boasts a staff of over six hundred and is considered by many to be Europe's finest. It is one of the very few hotels in France to claim Palace status, which means a 6, rather than 5 star rating.
I will finish with another quote from Hemingway: 'The only reason not to stay at the Ritz is if you cannot afford it.'

I cannot, alas. If you wish to attend or participate in the auction, take a look at the Artcurial website. I will content myself with slipping in from time to time, wandering its elegant public areas and treating myself to a drink.

Ah, the joy of luxury hotels! We can only fantasise, eh? The history sounds fascinating. One of these days I will be in Paris and visit for a cocktail.

Call me and we'll enjoy one together!

Carol, I am a book blogger and travel advisor and I just stumbled upon your books thanks to Trip Fiction. I ended up here on your Ritz post. I LOVE it. I toured it when I was in Paris 2 summers ago. It's quite mind boggling. I came in the front door wearing my sneakers and a dress (I was doing the Big Bus tour that day!) and luckily the gentleman who I was meeting was not available yet, so I slunk off to the nearest public bathroom to freshen up, change into my sandals, and basically get Ritz-ified!! I took pictures of the bathroom with it's gold swan shaped faucet handles. It was almost too pretty to do your business in! I love reading and hearing about historical hotels and the people who stayed and things that happened there. Cookie cutter chain hotels are not NEARLY as interesting. Looking forward to reading your books. I am on Facebook and my blog is on Blogger, baerbooks@blogspot.com. I am a champion of authors and books!