This week, I am sorting through the too-many books here at home. I am culling some, and collecting others into “families”: shelves of books inspired by the same theme.

One bookcase is now home to a family of books about aspects of the English landscape, from Alison Utley’s A Country Childhood through to Oliver Rackham’s books about trees to George Ewart Evans Ask the Fellows who Cut the Hay and more. Some we bought and some were given as gifts. Others, often the hardest to discard, were inherited.

Standing within the waves of scattered volumes, I start wondering what other titles should join this family: those by Robert Macfarlane, perhaps, or Roger Deakin? Or large-format books about landscape art or painting or photography? Where does the family of "landscape" end?

All at once I remember landscapes by a favourite artist: Eric Ravilious, painter, wood-engraver and designer. I went to the Dulwich Picture Gallery’s retrospective Ravilious exhibition in 2015, and in the video below you can see James Russell, the curator, talking about Ravilious and his pictures and the “scratch” technique that gives the artists pieces such luminosity.

Entry was for strictly limited periods but, once inside, I avoided the exit. I wove my way up and back though the exhibition, living with the Ravilious paintings throughout a wonderful afternoon. His work seems full of rolling downs, of chalk cliffs overlooking the sea and of lanes winding through peaceful fields: an essentially English rural landscape.
For some time, Eric Ravilious and Tirzah Garwood (also an artist and wood engraver) were part of an influential group of figurative artists living around Great Bardfield in Essex, although the landscapes of the South Downs dominate many of his most popular images. 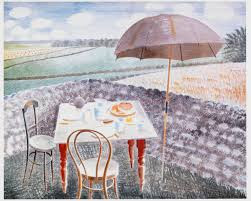 In 1939, Eric Ravilious signed up as a war artist with the Royal Marines, moving from one posting to another. He painted on land and from the moving decks of warships, watching the planes overhead. Ravilious brought the same sense of enigmatic light to all these harsher subjects: the airfields, the waiting planes and broken machinery, the men walking across wet sand to defuse a beached mine. 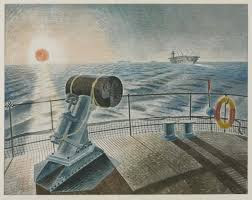 He learned to fly and was sent to Iceland. On the first day of September 1942, he joined one of three planes sent out to search for a lost aircraft. Ravilious’s aircraft never returned and, four days later, he and the crew were reported lost at sea.

I am often intrigued by how the making of art can run in families, both through what could be called the genes and also through the family culture: those families where the possibility of making art is acknowledged and celebrated. So, very recently, hearing the same surname again, I was immediately interested.

This “new” name was James Ravilious, Eric’s middle child. Born in 1939, James's only memory of Eric was running down the lane to hug his father as he left for war, and being given a threepenny coin from father's coat pocket. Sadly, after Eric's death, Tirzah’s already poor health worsened. She died, leaving her children orphans. James was only eleven. Growing up, he studied at St Martin’s School of Art, and afterwards taught painting and drawing in London. He fell in love and married a kindred spirit, Robin, in 1970. She was the daughter of the glass engraver and poet Laurence Whistler, and she also shared a sorrowful childhood.

During 1972, James and Robin left London for the countryside, and around that same time, James abandoned drawing and painting and took up photography. They settled by the village of Beaford, in what was then a largely unspoilt area of North Devon. James started taking photographs to record the landscape, the seasons, community, customs and people, but what began as a short project grew into a seventeen-year archive covering the changing rural life of the area. James added to it as well, copying earlier photographs of the same area. All the collected images now form the Beaford historical archive, whose images have been exhibited around the world.

Whether James’ talent was inherited though the genes, or learned through the artistic culture of his parents and family friends, one thing stands out for me. James Ravilious’s black and white photographs seem to share the same quality of quiet observation and love of the light visible in his father’s work. They both seem filled with a quiet but real passion for the English landscape. 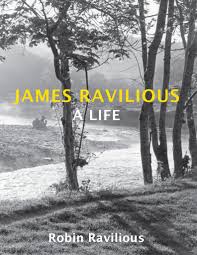 James Ravilious died too, in 1999, but his wife Robin has published an account of his life in 2017.  Here, also is a clip about an influential film that James Ravilious made about photography:

So how does this post link with History Girls and writing?
James Ravilious met the French photographer Henri Cartier-Bresson and was very influenced by him, adopting Cartier-Bresson's approach in his own photography, even down to using the same model of camera, a LeicaM3. James followed Cartier Bresson’s approach, including the rule about never posing a subject or cropping an image, so his subjects display a natural grace.

Additionally, James also took to heart Cartier-Bresson’s most fervent mantra:
There is such a thing as The Moment.
It is mysterious, but if you look at several shots of the one scene,
there is one that has it – as if there were a little poem there.

Today, revising a piece of fiction, I paused and pondered about this concept of that one essential mysterious “Moment”. Although painting and photography are visual art forms, I think that writers, too, try to choose that one specific “Moment”, try to write the one specific, telling scene, try to capture that one perfectly imagined visualisation in the hope that the magic (and poetry) will make the words live?

I’m going back to sorting out my book families: it’s easier than art.

ps. A travelling exhibition, “Ravilious and Co”, about Eric and his contemporaries opens at Compton Verney Gallery, Warwickshire, in March 2018.
.

Thank you for this, Penny - much to ponder!

Really interesting, this - a year or two ago, I saw some pictures by James R at an exhibition, and asked an attendant if he was related to Eric, but she'd never heard of the latter. And I've admired Laurence Whistler's beautiful windows at Moreton Church in Dorset - that snippet about his daughter is intriguing. Thank you!